A World Health Organization-led investigation found in its March report on COVID-19’s origins that a lab leak is an “extremely unlikely” cause, but officials and scientists have given many reasons to question that investigation and to continue considering the lab leak theory.

The head of the WHO said March 30 that the lab leak theory needs more investigation because the WHO team was not granted access to relevant data. The WHO report has been criticized by the White House, scientists and others for lacking scientific rigor. (RELATED: There Are A Lot Of Reasons To Be Skeptical Of WHO’s Report On COVID-19 Origins)

A State Department statement issued Jan. 15 offers three main points supporting the lab leak theory, although it does not draw a conclusion on the origins of the COVID-19 virus. All three points are countered or ignored by the WHO-led report in March. A senior State Department official told The Washington Post that the Biden administration does not dispute the information in the Jan. 15 statement, produced during the Trump administration.

The State Department memo says “several researchers inside the WIV became sick in autumn 2019, before the first identified case of the outbreak, with symptoms consistent with both COVID-19 and common seasonal illnesses.” China has blocked interviewing the previously ill researchers at the WIV, the statement says. Only a “small fraction” of WIV lab staff appear to have been tested for antibodies that would reveal possible coronavirus exposure, according to an open letter by 24 scientists issued Wednesday.

WIV researchers were also studying viruses similar to SARS-CoV-2, but China blocked access to records of such research being conducted at the WIV, according to the State Department’s statement. Eight additional viruses related to SARS-CoV-2 “can be seen in slides shown by Dr. Shi Zheng Li in webinars,” the scientists’ open letter says, referring to a WIV director and coronavirus expert. (RELATED: China Attacks WHO Advisory Member For Highlighting Alleged Errors In COVID Origins Report)

Thirdly, “The WIV has engaged in classified research, including laboratory animal experiments, on behalf of the Chinese military since at least 2017,” the State Department says. The WHO report does not address this claim.

The WIV lab staff also often used ordinary and not higher-level protective equipment around bats, according to the scientists’ letter. State Department cables warned in 2018 about lax security and risky research on bat coronaviruses at the WIV.

Shi, the WIV scientist, said she had “not slept a wink for days” for fear that the virus might have escaped her lab. She claims to have determined it did not. The WHO-led report says the Wuhan lab had “high quality biosafety.”

Additionally, a Wuhan laboratory moved on December 2, 2019, to a new location near the Huanan market. “Such moves can be disruptive for the operations of any laboratory,” the WHO report states.

Many agencies in the intelligence community believe the coronavirus leaked out of the Wuhan lab, a senior intelligence official told the Daily Caller News Foundation in May 2020. 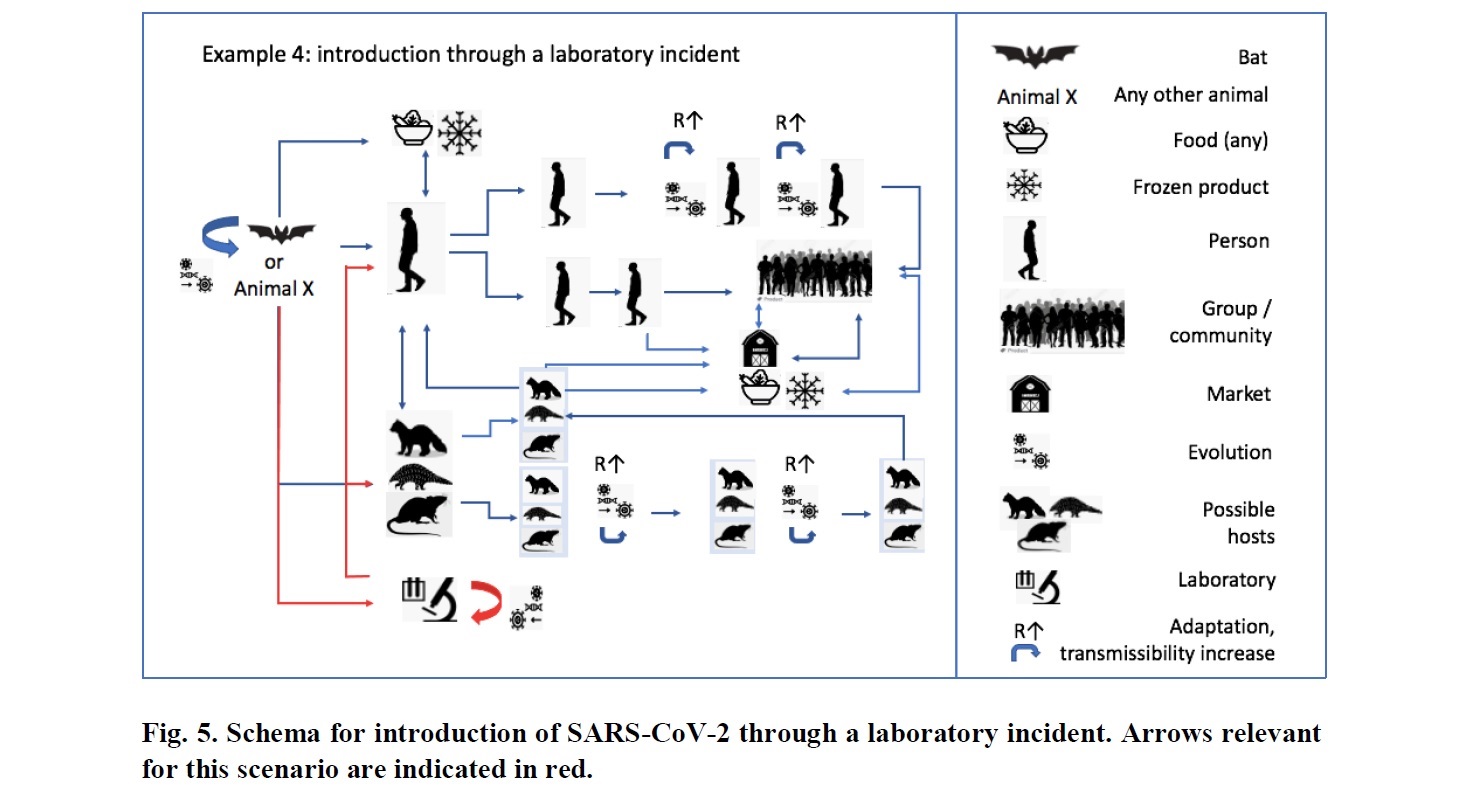 Source: WHO-convened Global Study of the Origins of SARS-CoV-2, p.119. Used with permission.

Both The Wall Street Journal and The Washington Post editorial boards have called for the Biden administration to declassify more intelligence on the WIV. “China’s propaganda backed by the WHO’s failure will prevail in much of world opinion,” unless the U.S. declassifies related intelligence, according to The Wall Street Journal. (RELATED: How A Legitimate Theory About COVID-19 Emerging From A Lab Got Dismissed By Media Fact Checkers)

The WHO team’s report did not consider the “hypothesis of deliberate release or deliberate bioengineering of SARS-CoV-2 for release, the latter has been ruled out by other scientists following analyses of the genome.” U.S. officials have said they are not investigating this hypothesis further either. But the lab leak theory does not require the virus to have been manmade, only to have escaped the lab.

Lab security incidents have even happened at the Centers for Disease Control and the National Institutes for Health. It can happen in various ways: “High-tech safety systems have failed dramatically. Vials of viruses and bacteria have gone missing. Researchers bitten by infected lab animals have been allowed to move about in public – rather than being quarantined – while waiting for signs of infection to appear,” according to USA Today.

Some scientists have said they believe a lab leak is the most likely explanation for COVID’s origin. Jamie Metzl, who once worked for Bill Clinton and Joe Biden, has since January 2020 said he believes a lab leak is the likeliest source of COVID-19: “I would say there’s an 85% chance the pandemic started with an accidental leak from the Wuhan Institute of Virology or Wuhan CDC and a 15% chance it began in some other way.”

“If China keeps preventing a full and unrestricted international forensic investigation into the origins of the pandemic, I believe it is fair to deny Beijing the benefit of the doubt,” Metzl wrote.

U.S. biologist Bret Weinstein believes there is a 90 percent chance the coronavirus leaked from a lab, he said  in an interview with Bill Maher on Jan. 30.

Ebright of Rutgers University has said he does not want to quantify how likely a lab leak was, but it is certainly a possibility.

A Chinese scientist who wrote a paper in Feb. 2020 that stated “the killer coronavirus probably originated from a laboratory in Wuhan” had his paper removed from the server on which it was published.

The Biden administration says it is not ready to make a determination about precisely where COVID-19 originated.

Former President Trump, former Secretary of State Mike Pompeo and other former administration officials have supported the lab leak theory. Redfield, the former director said, “it’s not unusual for respiratory pathogens that are being worked on in a laboratory to infect the laboratory worker.” (RELATED: Former Director Of CDC Is Just The Latest Of Several Top Officials Supporting Lab Leak Theory)

“We know that the first sightings of this [virus] occurred within miles of the Wuhan Institute of Virology,” Pompeo said on the Hugh Hewitt Show.

Former deputy national security adviser Matthew Pottinger said he believes a lab leak is the most likely origin of the virus. “If you weigh the circumstantial evidence, the ledger on the side of an explanation that says that this resulted from some kind of human error, it far outweighs the side of the scale that says this was some natural outbreak,” he said in an interview with “Face the Nation” in February.

The WIV lab was studying “a virus that was discovered in the southwestern province of Yunnan that is most similar to the virus that we all now know as COVID.” Researchers, including some associated with the Chinese military, were manipulating viruses similar to the one causing COVID-19 and studying their lethality, according to Pottinger.

Weighing the evidence for theories of COVID’s origin, a senior administration official told The Washington Post in April 2020 that “The idea that it was just a totally natural occurrence is circumstantial. The evidence it leaked from the lab is circumstantial. Right now, the ledger on the side of it leaking from the lab is packed with bullet points and there’s almost nothing on the other side,” the official said.

Former Food and Drug Administration commissioner Scott Gottlieb told “Face the Nation” on March 28 that “the lab leak theory doesn’t seem like a plausible theory unless you aggregate the biggest collection of coronaviruses and put them in a lab, a minimum-security lab in the middle of a densely populated center and experiment on animals, which is exactly what the Wuhan Institute of Virology did.”