Branson was the first billionaire in space last week when he and several crew members aboard his VSS Unity spaceplane successfully flew to an altitude of 53.5 miles. His company Virgin Galactic, founded in 2004, is developing commercial spacecraft to be used in suborbital flights for those seeking a trip to outer space. Musk’s SpaceX, founded in 2002, has been at the forefront of the private space industry for over a decade, with Musk planning a mission to Mars as early as 2024.

With Branson and Bezos competing directly for shares of the emerging suborbital space tourism market and Bezos and Musk each vying for lucrative government contracts, the competition between the world’s richest men to grow their respective space companies has been dubbed the “billionaire space race.” Washington Post writer Roxanne Roberts compared the competition to the rivalry between Oracle’s Larry Ellison and Microsoft’s Paul Allen, in which the two men competed with one another for the largest yacht.

Many in the space business say the race is revitalizing the industry, with personal competition leading to innovation. (RELATED: How Much Would It Cost To Go To Space With Jeff Bezos? The Number is Staggering) 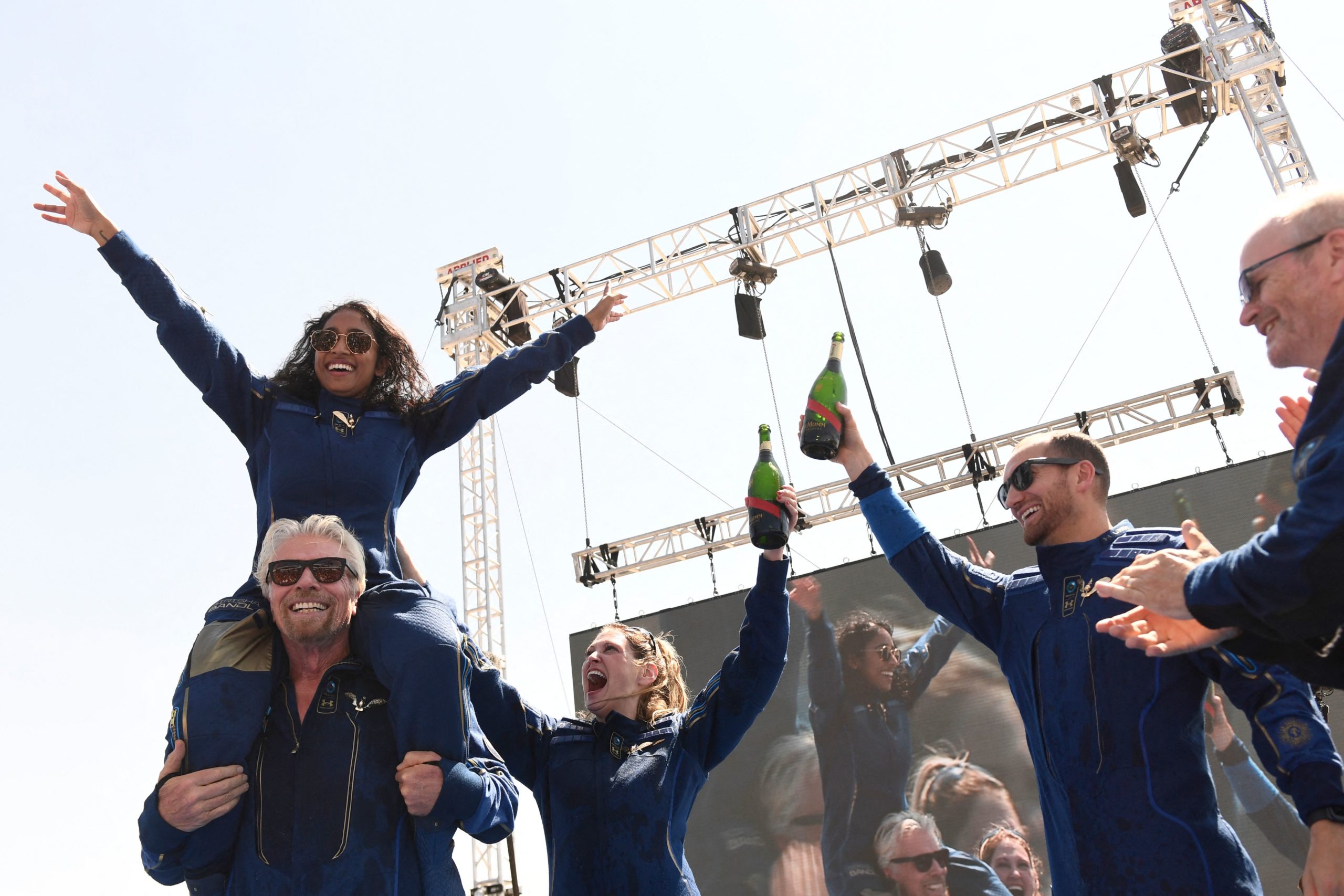 “There will undoubtedly be major, but unexpected, benefits from this competition,” Roger Rusch, president of satellite consultant firm TelAstra, told the DCNF. “Today it appears that Musk is leading the pack, but it will be a long and interesting phase for space projects.”

The billionaires’ companies have already made significant advances in reducing the cost of space flight. For example reusable rocket boosters, a technology first pioneered by SpaceX and later adopted by Blue Origin, Virgin Galactic, and other space companies, has greatly reduced the cost of launches, thereby opening doors to the industry.

“The key to driving the space industry, and the space tourism market in particular, is reusability,” Marco Caceres, senior analyst at aerospace consultant firm Teal Group, told the DCNF. “Reusability has allowed SpaceX to offer these rockets for less than half the price of their competitors.”

By significantly reducing the cost of rocket launches, SpaceX can afford to launch more rockets, which in turn provides more opportunities for innovation, and more data from which to learn. This will lead to further innovations which may lower prices even further, according to Caceres.

“The more you launch, the more prices will drop,” he said. (RELATED: Venture Capitalist Sells Stake In Virgin Galactic For $213 Million)

“Speed of innovation, and the number of launches, is what’s moving the industry forward,” Crawford told the DCNF.

Despite the advances, the competition between Bezos, Branson, and Musk has drawn criticism from many public figures, with comedians Amy Poehler and Seth Myers characterizing it as a self-indulgent pastime for bored billionaires. Vermont Sen. Bernie Sanders described the competition as a “space hobby,” while former Hawaii Rep. Tulsi Gabbard asked Bezos to “please stay up there” during the Blue Origin CEO’s Tuesday flight.

“Billionaires rocketing off to space isn’t a sign of progress. It’s a sign of grotesque inequality that allows a select few to leave earth behind while the rest of humanity suffers,” former Labor Secretary Robert Reich tweeted last week. (RELATED: Over 165,000 People Sign ‘Do Not Allow Jeff Bezos To Return To Earth’ Petition Following Space Launch)

Bezos, please stay up there. Do the world a favor.

However, some experts say the space race could produce technological advances with benefits unrelated to space, that could be enjoyed by all.

“I think having more people develop ways to get into space is going to increase the technology available for everyone,” Rocky Kolb, professor of astrophysics at the University of Chicago, told Yahoo Finance.

The GPS, for example, was developed by NASA during the space race in the 1960s, as were solar cells, artificial limbs, and infrared ear thermometers.

“There will be technological spin-offs that we don’t know, because there always are every time we’ve invested in space,” Greg Autry, professor of space leadership at Arizona State University, told Yahoo Finance.

The competition between the billionaires has also helped to remove barriers of entry to the industry for smaller startups. There are currently over 1,500 unique companies in the space economy, receiving almost $200 billion in investor funding, according to a March report by Space Capital.

“10 years ago when SpaceX launched their first customer they removed the barriers to entry, and we’ve seen all this innovation and capital flood in,” Chad Anderson, managing partner of Space Capital, told Fast Company. 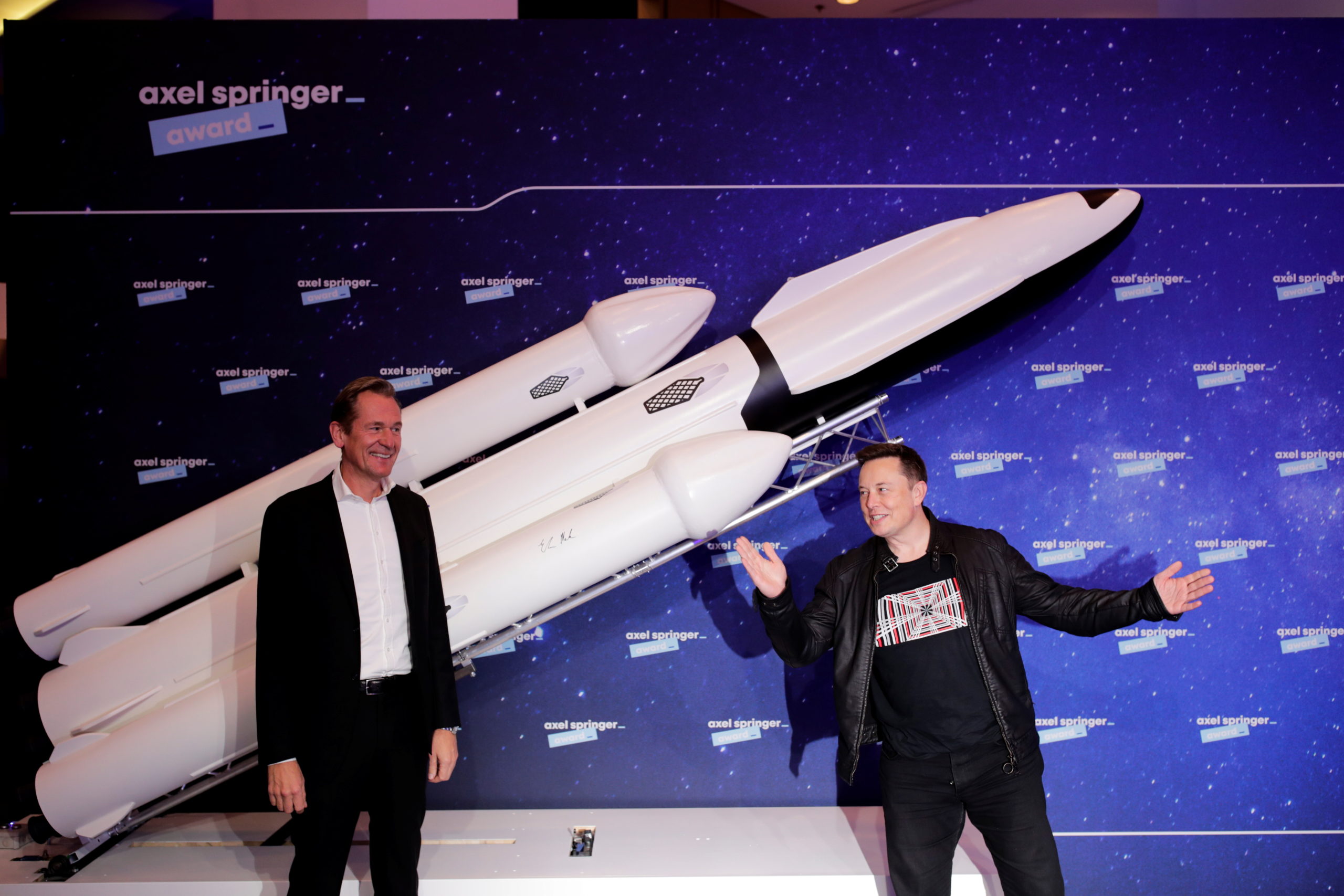 SpaceX owner and Tesla CEO Elon Musk poses next to Axel Springer’s Chairman of the Board Mathias Doepfner. (Photo by Hannibal Hanschke-Pool/Getty Images)

“Competition drives down price. There will be a day in the not-too-distant future where families will be deciding whether they want to go to Disney World or space,” Crawford told the DCNF.

The decrease in cost has led to the federal government contracting out development of spacecraft.

NASA’s heavy-lift rocket Space Launch System (SLS), intended to be used to reach the Moon and Mars, was estimated to cost as high as $2 billion per launch, while the current cost for launching a SpaceX Falcon 9 rocket is around $28 million. SpaceX’s heavy-lift vehicle Starship, currently in development, could make SLS obsolete according to Jonathan McDowell, astrophysicist at the Harvard-Smithsonian Center for Astrophysics.

SpaceX was awarded a $2.9 billion contract by NASA in May to take astronauts to the Moon using its Starship vehicle. Blue Origin won a contract in April to design a nuclear-powered spacecraft that will fly in low Earth orbit.