How does a once-great country become the complete mess America is today? The honest answer is we are all at fault. It’s as easy for the left to blame conservatives as it is for the right to blame liberals. It’s easy for the elites in cities to say Americans aren’t working as hard as they used to and are getting fat off too much fast food. It’s easy for regular Americans to look at the hyper-educated urban elites and feel like they’ve sold out and left America behind to pursue profits in foreign markets. The problem is all of this is true.

America is no longer a true community based on shared ideals and principles. It’s now a group of segregated societies. There is still racial segregation (something the left bizarrely and sadly even encourages these days), but class separation is what most divides Americans. Elite Americans live in private, high-end communities, dine at private clubs and fly in private planes. The economic divide has always existed, but the scale and extent of it has reached new highs. America is no longer a cohesive society. It’s so sad that nobody likes to talk about any of it, but it’s where America is in 2021.

All of this background explains how a relatively minor matter (defined by the number of deaths nationally) like the delta variant can so emotionally tear apart a country. Mask fights are back. Lockdown debates aren’t civil. The right looks at the left’s reaction to delta and sees authoritarian hysteria. The left looks at the right’s reaction and sees reckless ignorance. How do you bridge this gap? The only thing each of us can do is make an actual, good-faith effort to talk more to people we disagree with. (RELATED: Lockdown Enthusiasts Are All Over The Delta Variant. How Serious Is This Strain?) 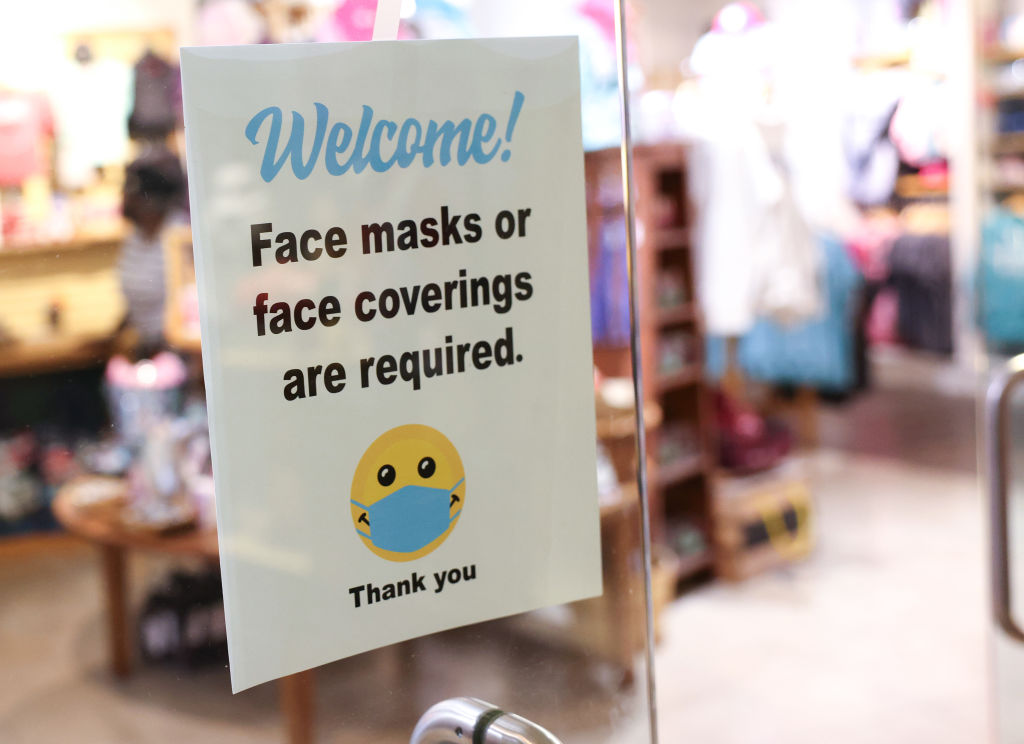 WASHINGTON, DC – JULY 30: A sign requiring mask use is seen outside of a store in Union Station on July 30, 2021 in Washington, DC. DC Mayor Muriel Bowser restored a COVID-19 indoor mask mandate, regardless of vaccination status, starting Saturday. (Photo by Kevin Dietsch/Getty Images)

The Daily Caller, the news site I run, is doing just this every day. Well, technically Monday, Wednesday and Friday mornings on our premier show, “Vince and Jason Save the Nation.” “Save the Nation” is co-hosted by a black liberal and a white conservative. Vince Coglianese, the conservative host, is a Daily Caller editor and a Washington, D.C., radio host. Jason Nichols, the liberal host, is a contributor to numerous liberal news outlets and a Black Studies professor at the University of Maryland. They are both smart and informed on virtually every current events issue.

They disagree … a lot. The difference is they are friends. They are committed to talking through things and, when possible, even finding some consensus. The result is more entertaining and informative than it is angry. Not everyone wants this sort of content. Unless more people start wanting it — and start doing this in their own lives — our country is doomed.

For conservatives, there is no “own the libs” outcome that ends the current national breakdown, yet that’s the obsession on the right. For liberals, it may be enticing to hold all the levers of media, corporate and (for the moment, anyway) political power. Canceling conservatives and driving them from the public sphere may feel good, but it’s just making things worse. YouTube’s suspension of Sen. Rand Paul for questioning nonmedical cloth face coverings takes the left’s authoritarian anti-speech impulses to an entirely new level. Paul said things many scientists of all political persuasions believe. There is certainly no hard consensus that he’s wrong. More importantly, the sort of debate Paul is engaging in is the way to reach national consensus. YouTube did not ban Paul because he’s wrong; YouTube banned the senator to stifle debate. They banned him because he dared stray from the official government position. This is plainly un-American. More importantly, has anyone on the left considered in even the most shallow sense where this ends? (RELATED: Glenn Greenwald Blasts YouTube For Suspending Rand Paul, Says ‘We’re Now At The Point’ Almost ‘No Dissent Is Allowed’) 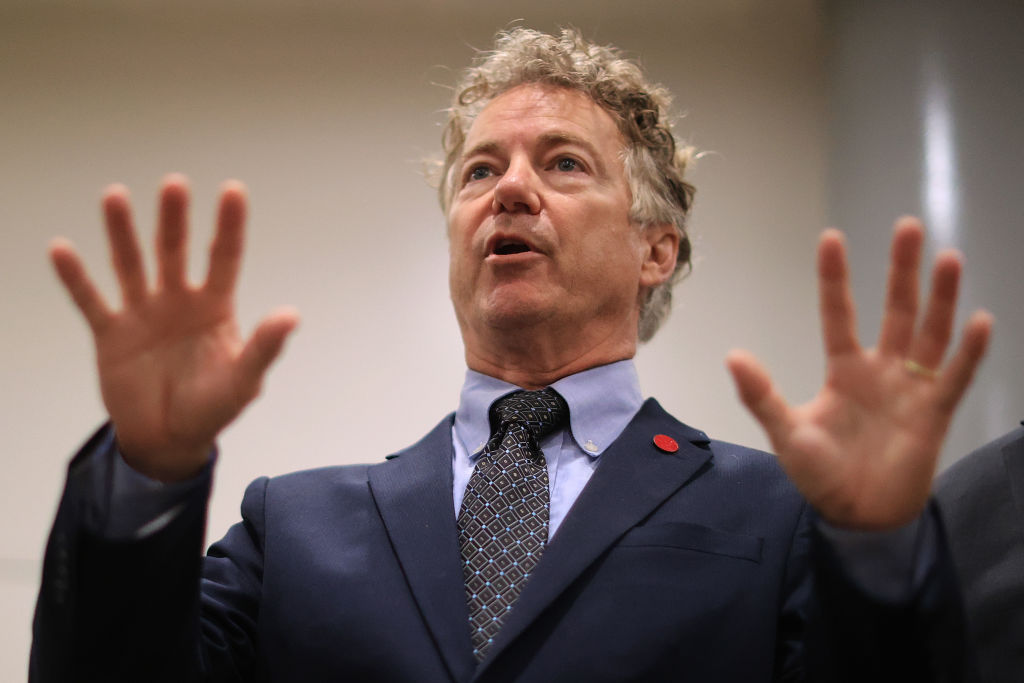 WASHINGTON, DC – MAY 28: Sen. Rand Paul (R-KY) speaks to reporters about why he and a small group of Republican senators are holding up votes over opposition to a Chinese trade bill at the U.S. Capitol on May 28, 2021 in Washington, DC. (Photo by Chip Somodevilla/Getty Images)

Even holding all the levers of power will not allow the left to defeat the right without honest debate, yet the liberals willing to engage with conservatives could literally share a taxi together. There are only a handful. Listing them is easy: Rep. Ro Khanna, former Rep. and Democratic presidential candidate Tulsi Gabbard, Daily Caller’s Jason Nichols, journalist Glenn Greenwald and maybe a couple of others. That’s about it.

On the right, there are certainly many more willing to debate, but the overall attitude is also more interested in a fight. In this case, the result is even more dire. News flash to conservatives: It’s not working. You are not winning these debates. The majority of Americans are for both vaccine and mask mandates. It’s time to try a new strategy. For starters, less hysteria would help.

These mandates are not matters of fundamental personal liberty. I’m not sure where that idea came from, but every society has the right to protect itself. The U.S. government has the right to forcibly draft our strongest and youngest and send them off to die in a war if that’s what our leadership decides is needed. Our only redress is to vote the politicians out of office. (RELATED: ‘The Mandates Are Coming’: Fauci Says Full FDA Approval Will Inspire A Flood Of Vaccine Requirements)

It’s the same with vaccines. State governments have been mandating vaccines for hundreds of years now. The courts have examined the issue thoroughly. There hasn’t been a ton of debate. If the government determines that a vaccine is needed to protect society, the courts have generally allowed it, subject to very few and very specific exemptions. So, stop screaming about your liberty.

Instead, maybe talk about the real part that bothers you. COVID-19 is not risky enough to the young and healthy for the government to take this choice away from individuals. The vaccine is available (and highly protective) for those who are at risk. Given that fact, we should be able to decide for ourselves on this one. That’s not crazy. Conservatives may even convince some people, if we even bothered debating anymore.