McConnell — the longest-serving Senate GOP leader in U.S. history — cautioned that while the Senate process for judges was already filled with controversy, the Biden administration and Democrats could soon further politicize the process. The Republican leader delivered the speech at The Heritage Foundation, host of the Thursday event honoring Thomas’ 30th anniversary on the Supreme Court.

“I had come to the Senate with a high-minded, perhaps, in retrospect, rather a naive view … that the Senate should stick to evaluating nominees’ competence and integrity and let presidents select legal philosophy as they like,” McConnell remarked. “That’s what I thought back then. Well, it didn’t take long for Ted Kennedy and friends to permanently disabuse me of that rather naive notion.”

McConnell recalled the confirmation process of Robert Bork, a federal judge who former President Ronald Reagan nominated to fill a Supreme Court vacancy in 1987. In that process, former Democratic Sen. Ted Kennedy of Massachusetts successfully convinced his Democratic colleagues, who held a majority in the Senate, to oppose Bork’s confirmation, according to the National Constitution Center.

The Kentucky senator drew a parallel between Bork’s process and the 1991 confirmation of Thomas. In a 52-48 vote, the Senate confirmed Thomas after he was accused of sexual harassment by a former aide in what McConnell called a “disgraceful firestorm.” (RELATED: ‘Do You Guys Think I’m Bluffing?’: McConnell Doubles Down Against Debt Ceiling Raise As Congress Barrels Toward Government Shutdown)

“I’m not going to dwell on that episode tonight, there’s no reason to,” McConnell continued during his speech. “We all know what the people behind the smear campaign revealed, actually about themselves.”

“I’ll say this, I was inspired then, and I’m still inspired today, by the courage, the resilience and the faith with which Justice Thomas endured those months and emerged with an appetite for service still intact,” he added. 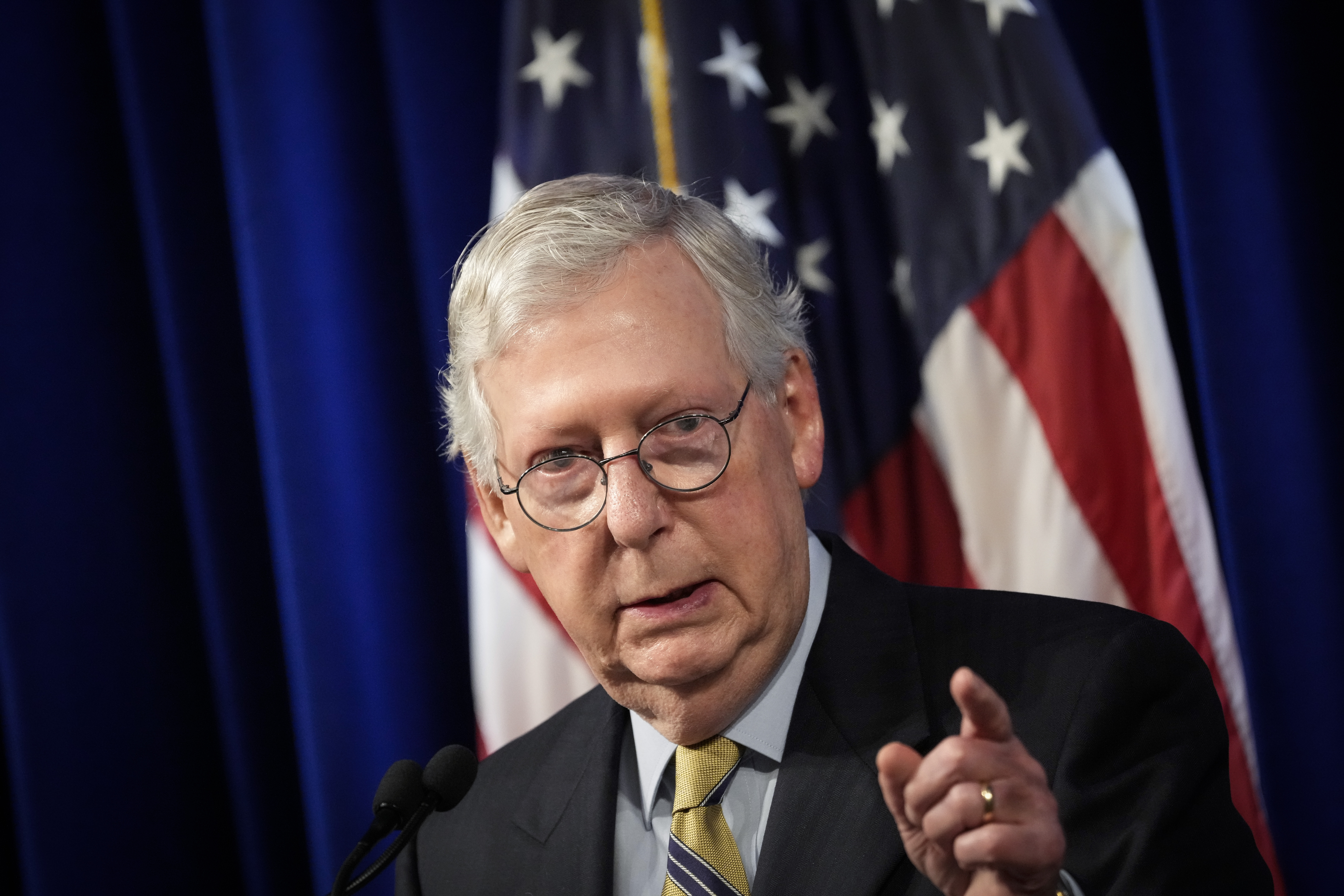 McConnell cited a 2013 decision by then-Senate Majority Leader Harry Reid to abolish the filibuster for judicial nominations as another turning point in the relationship between the legislative and judicial branches of the federal government. Reid’s move, which Republicans opposed, opened the door for the Senate to confirm judges through a simple majority vote, The Washington Post reported.

In 2016, after the death of former Justice Antonin Scalia, McConnell refused to consider former President Barack Obama’s nominee for the vacancy, current Attorney General Merrick Garland. At the time, McConnell argued that a Senate vote should only take place after a presidential election. During former President Donald Trump’s tenure, McConnell ushered in Justices Neil Gorsuch, Brett Kavanaugh and Amy Coney Barrett, who were confirmed largely along party lines and with fewer than 60 votes.

The GOP leader warned that under the Biden administration the politicization of the court appeared to intensify. He noted that while Secretary of State Antony Blinken cautioned against court-packing during a speech in Ecuador on Wednesday, the White House is simultaneously mulling an expansion of the Supreme Court.

“Storm clouds are gathering on the horizon,” McConnell said. “The very concept of an independent and insulated judiciary is actually at stake.” (RELATED: Here’s A Timeline Of The 2018 Kavanaugh Confirmation) 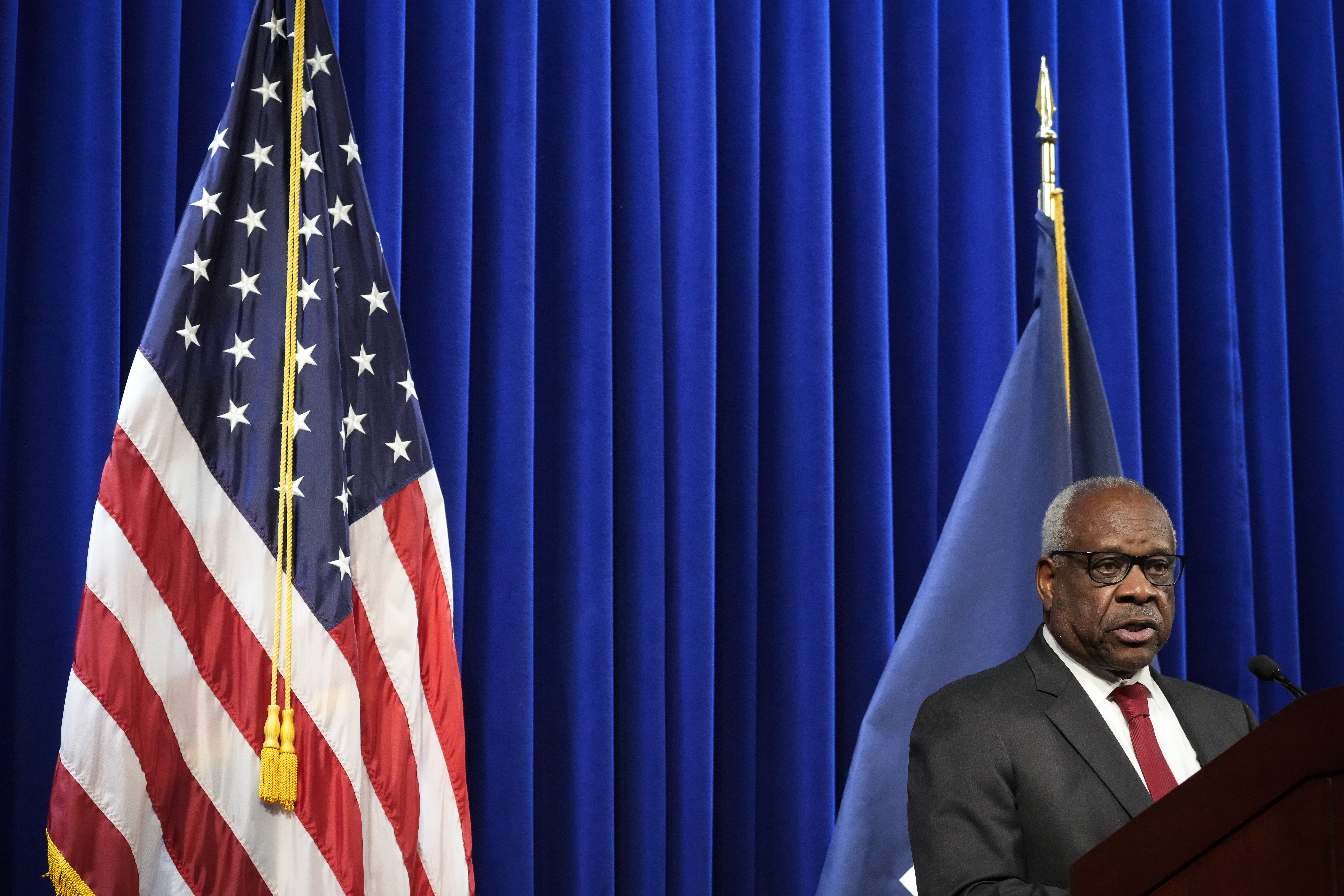 “Tony Blinken can fly out to Latin American and finger-wag other nations about pressuring judges while his own boss tries the same trick right here at home,” he continued. “It would be perfect satire if it wasn’t so crazy or scary. Again, this is not about conservative policy outcomes versus liberal ones, it runs much deeper.”

During the speech, McConnell praised Thomas for his work in the three decades since he was confirmed, especially his steadfastness in defending “unborn life, every time, without fail.” The senator also commended Thomas for his willingness to vigorously defend First Amendment protections.

Following McConnell’s remarks, Thomas delivered a brief address, mainly thanking individuals and officials he worked with during his tenure. (RELATED: McConnell Mocks Media For Reporting On Barrett’s Faith As If They ‘Discovered Some Secret Scandal’)

“Without the people who’ve helped me over the years, who’ve been there, without you all who are here, without God’s grace, without my wonderful bride, who’s always there, I would not be standing here,” Thomas said.

The evening speeches followed a day-long symposium featuring judges and legal scholars who highlighted various aspects of Thomas’ time on the high court.