House Democrats’ plan Friday to pass both the bipartisan infrastructure package and President Joe Biden’s social-safety net bill collapsed after a handful of moderates refused to vote on the $1.75 trillion budget without a score from the Congressional Budget Office and liberals in response refused to pass the public works bill by itself.

Democrats originally teed up the both bills for final passage late Thursday, advancing the budget through the House Rules Committee just before midnight. Their plan, however, unraveled Friday morning as the moderates refused to change their position even after meeting with party leadership.

After hours of negotiations Friday (conducted as a vote to adjourn the chamber remained open for over seven hours, making it the longest in the history of the House) in an attempt to convince Democrats insistent on a CBO score before voting, House Speaker Nancy Pelosi announced a compromise: that instead of passing the bill itself, Democrats would vote on the rule governing its debate. Immediately after, Pelosi announced in a Dear Colleague letter, they would vote on the bipartisan infrastructure bill.

“The agenda that we are advancing is transformative and historic, hence challenging,” Pelosi said.

Soon after, however, Washington Rep. Pramila Jayapal, the chair of the far-left Congressional Progressive Caucus, said that many of her members would refuse to vote for the infrastructure package if the budget did not first pass, a position which they have held for months.

“As we’ve constantly said, there are dozens of members who want to vote both bills … out of the House together,” Jayapal said in a statement. “We now understand that there are six Democratic members who want a formal CBO score on Build Back Better before voting.”

“If our six colleagues want to wait for a CBO score, we would agree to give them that time – after which point we can vote on both bills together,” Jayapal concluded.

Despite opposition from the party’s left wing, House leadership insisted that an infrastructure vote would happen Friday. “I believe the votes are there,” House Majority Leader Steny Hoyer told reporters. (RELATED: Votes On Build Back Better, Infrastructure Bill Delayed As Democrats Scramble To Reach Agreement On Lowering Drug Costs) 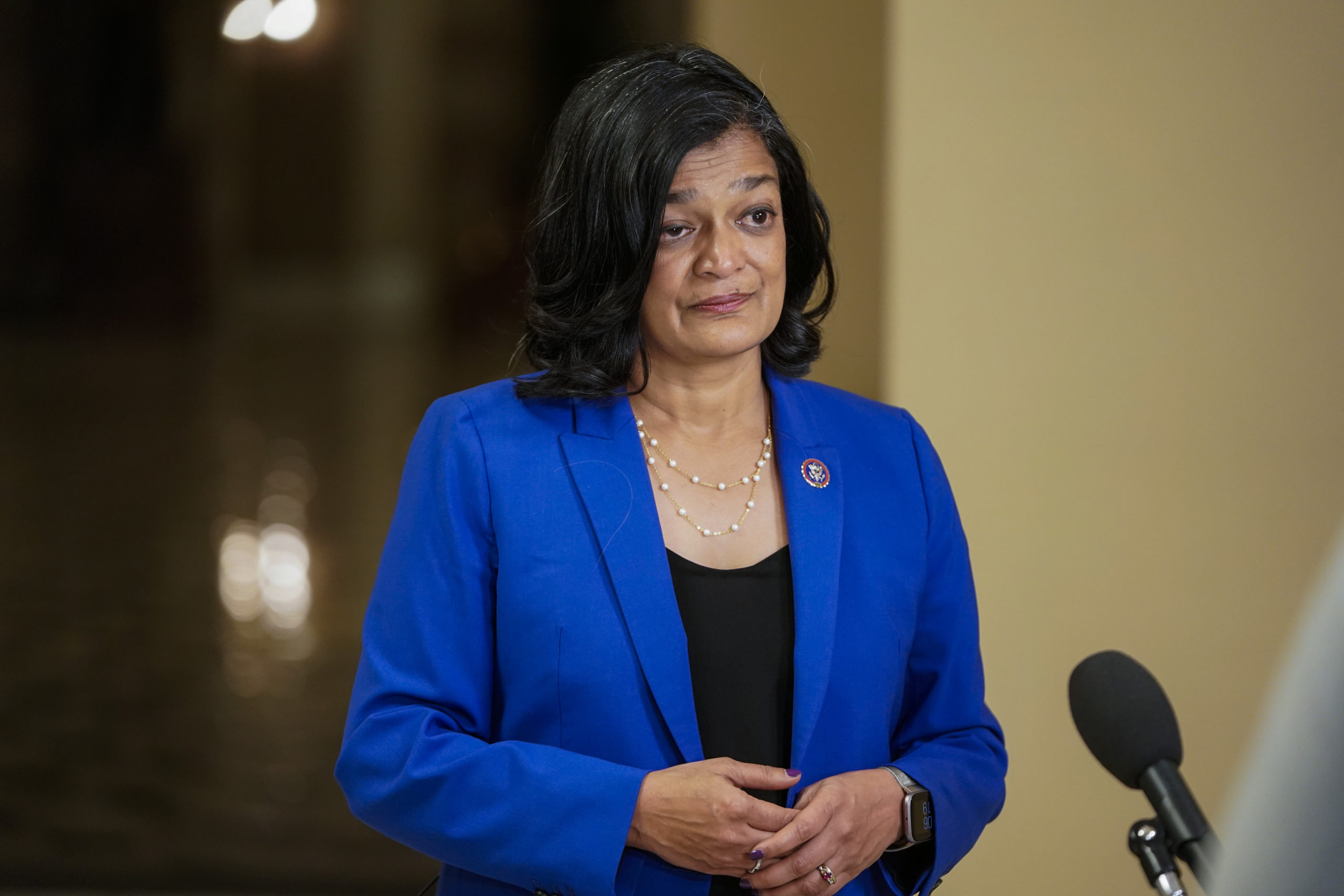 Rep. Pramila Jayapal gives an interview Thursday. Her caucus has repeatedly blocked the infrastructure bill from passing the House without the budget doing so as well. (Joshua Roberts/Getty Images)

The bipartisan package allocates about $1.2 trillion over the next decade towards improving roads, bridges, ports, waterways and rural broadband access. It passed the Senate in August with 69 votes.

The $1.75 trillion package addresses an array of Democratic priorities from climate change to child and in-home care. It contains provisions agreed upon at the last minute that Democrats hope will lower the price of prescription drugs, expands Medicare to allow for hearing coverage and includes a corporate minimum tax of 15%, among other revenue sources negotiated after opposition from moderates killed an effort to raise the tax rates on corporations and wealthy Americans.

But included in the House spending bill were provisions establishing paid family leave and raising the cap on state and local tax (SALT) deductions, priorities among others that Democratic senators across different wings of the party are already on-record opposing as written.

Sen. Kyrsten Sinema, a moderate from Arizona who has already objected to some of the bill’s foundational revenue sources, has yet to endorse the plan. Vermont Independent Sen. Bernie Sanders and West Virginia Sen. Joe Manchin, a key Democratic centrist, have publicly opposed the SALT deductions and re-inclusion of paid family leave, respectively. (RELATED: Sen. Sanders Rips One Of Democrats’ Proposed Tax Cuts: ‘A Terrible, Terrible Message’)

“At a time of massive income and wealth inequality, the last thing we should be doing is giving more tax breaks to the very rich,” Sanders said Tuesday. “Democrats campaigned and won on an agenda that demands that the very wealthy finally pay their fair share, not one that gives them more tax breaks.”

While the infrastructure bill can immediately land on Biden’s desk once out of the House, the budget, dubbed the Build Back Better Act, faces a much more complicated path to becoming law.

Upon receiving a score from the Congressional Budget Office and reaching the Senate, it is all but certain to be amended by Democrats opposed to specific provisions as the House wrote them. If Senate Democrats unite behind a package, it then needs approval from Senate Parliamentarian Elizabeth MacDonough to ensure it complies with the chamber’s rules.

If it clears, the Senate will have a vote-a-rama, where Republicans can offer hundreds of politically tricky amendments and then could pass if every single Democrat votes in favor. If it does, it heads back to the House, likely without the proposals that many, including House Speaker Nancy Pelosi, have triumphed.