Connecticut parents claimed a school district is indoctrinating elementary school students about transgenderism, including a book for kindergarteners.

Officials of the West Hartford Public Schools told parents that they could not opt out from the materials, according to a release from advocacy group Parents Defending Education. The reading list for kindergarteners included the book “Introducing Teddy,” according to a lesson sheet shared with the Daily Caller News Foundation.

“One sunny day, Errol finds that Thomas is sad, even when they are playing in their favorite ways. Errol can’t figure out why, until Thomas finally tells Errol what the teddy has been afraid to say: ‘In my heart, I’ve always known that I’m a girl teddy, not a boy teddy. I wish my name was Tilly, not Thomas,’” the summary for the children’s book reads.

“I Am Jazz,” which relates the story of transgender reality star Jazz Jennings, also appears on the reading list for fifth-graders.

“Teaching elementary students that their parents assigned them their gender at birth but may have gotten it wrong because anatomy is separate from gender is an obscene example of adults using ideology to confuse and manipulate children’s minds,” Erika Sanzi of Parents Defending Education told the DCNF. “The fact that parents are not permitted to opt their children out of this content based in gender ideology is so sinister, it’s hard to believe it’s even legal.”

The list of books for kindergarten also includes titles that discuss racial issues, including “Let’s Talk About Race” by Julius Lester. (RELATED: Wisconsin School District Announces It Will Keep Parents In The Dark About Kids Declaring Themselves Transgender) 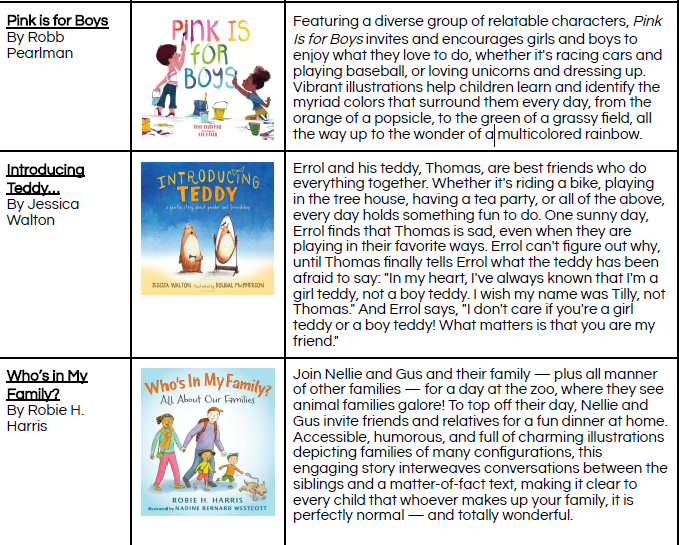 Learning from Justice is a program of the Southern Poverty Law Center, and states that its objective is “to be a catalyst for racial justice in the South and beyond, working in partnership with communities to dismantle white supremacy, strengthen intersectional movements and advance the human rights of all people.”

“The most significant portion of Learning for Justice’s materials focuses on race, the problem of whiteness, white supremacy, systemic racism, and similar CRT-based concepts,” according to a 2021 report by the Family Research Council. 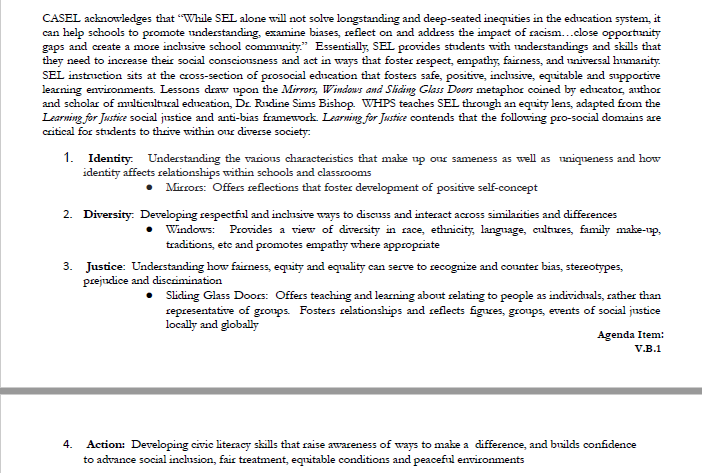 Critical race theory holds that America is fundamentally racist, yet teaches people to view every social interaction and person in terms of race, and whose adherents pursue “antiracism” through the end of merit, objective truth and the adoption of race-based policies.

“We, the members of West Hartford Public Schools, dedicate ourselves to the pursuit of equity. Equitable schools are those that value and honor ALL in our community as unique individuals capable of maximizing their true potential. We make a solemn promise to identify and dismantle all elements of systemic racism and historical inequities,” a “Vision For Equity And Anti-Racism” posted on the school district’s website said. (RELATED: Teachers, CRT Advocate Discuss How To Sneak Teaching About ‘White Privilege’ Past ‘Trump Country’ Parents)

Screenshot from WHPS website showing “Vision For Equity And Anti-Racism.”

An email from the DCNF to Haskins requesting comment was blocked. WHPS Superintendent Tom Moore did not immediately respond to the DCNF’s request for comment.