The majority of governing board members for the American Association of School Librarians expressed that they believe the removal of alleged “pornographic images” from school libraries is akin to “book banning,” according to their social media posts.

The American Association of School Librarians (AASL) is a branch of the American Library Association that specifically serves primary and secondary schools. The AASL is at the forefront of a contentious debate among parents over whether books with pornographic images and sexual narratives belong in school libraries.

“Fun Home” is among the books considered “inappropriate” by some parents. The book shows images of oral sex and signs hanging in a bedroom that read “Lesbian Terrorist,” and “Keep Your God Off My Body.” (RELATED: Parents Against Pornographic Books Speak Out At Board Meeting Despite Threats) 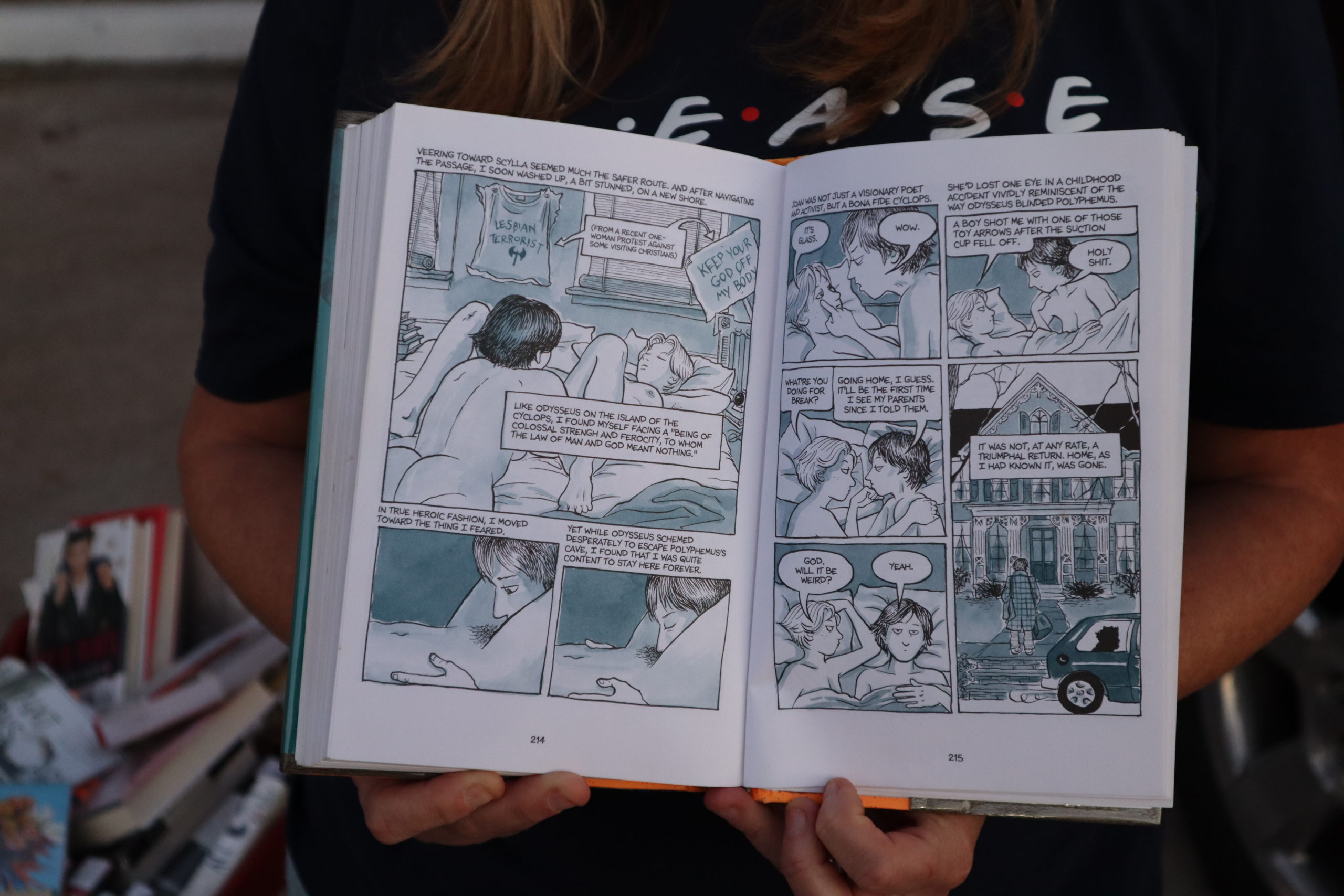 A majority of the AASL’s Board of Directors posted online calling for all books to remain in school libraries. Several reposted claims that the removal of books is anti-LGBT and advocated for purchasing more books that tell stories about “underrepresented communities.”

Sylvia Knight Norton, the executive director of the AASL’s board, retweeted a post that read, “Is there anything more actual cancel culture than trying to get books banned from schools en masse because they make you feel uncomfortable or have a differing world view [sic]?”

Erika Long, the board’s secretary and treasurer, reposted a tweet that read, “I am so disgusted with this country.” She also retweeted a post that said “queer content” is not “pornographic.”

“Books with queer content aren’t inappropriate or pornographic. They’re books,” the tweet read. “Books belong in classrooms and school libraries. If a parent does not want his/her/their child to read a book, fine. But that parent has no right — no right — to say other kids cannot read those books.”

Long also retweeted that “School librarians do not purchase pornography for their collections.”

Diane Chen, the division councilor for the board, also reposted claims that the calls to remove alleged pornography are hurting black and LGBTQ groups.

Chen also tweeted that an American Library Association conference in Salt Lake City provided members with a program on “history lesson[s] of the Black Panther Party.”

“Kekla Magoon is giving librarians an essential history lesson of the Black Panther Party to disrupt the deliberate misconceptions embedded in our collective consciousness. They were grounded in collective action for justice, education & empowering the Black community,” the tweet reads. 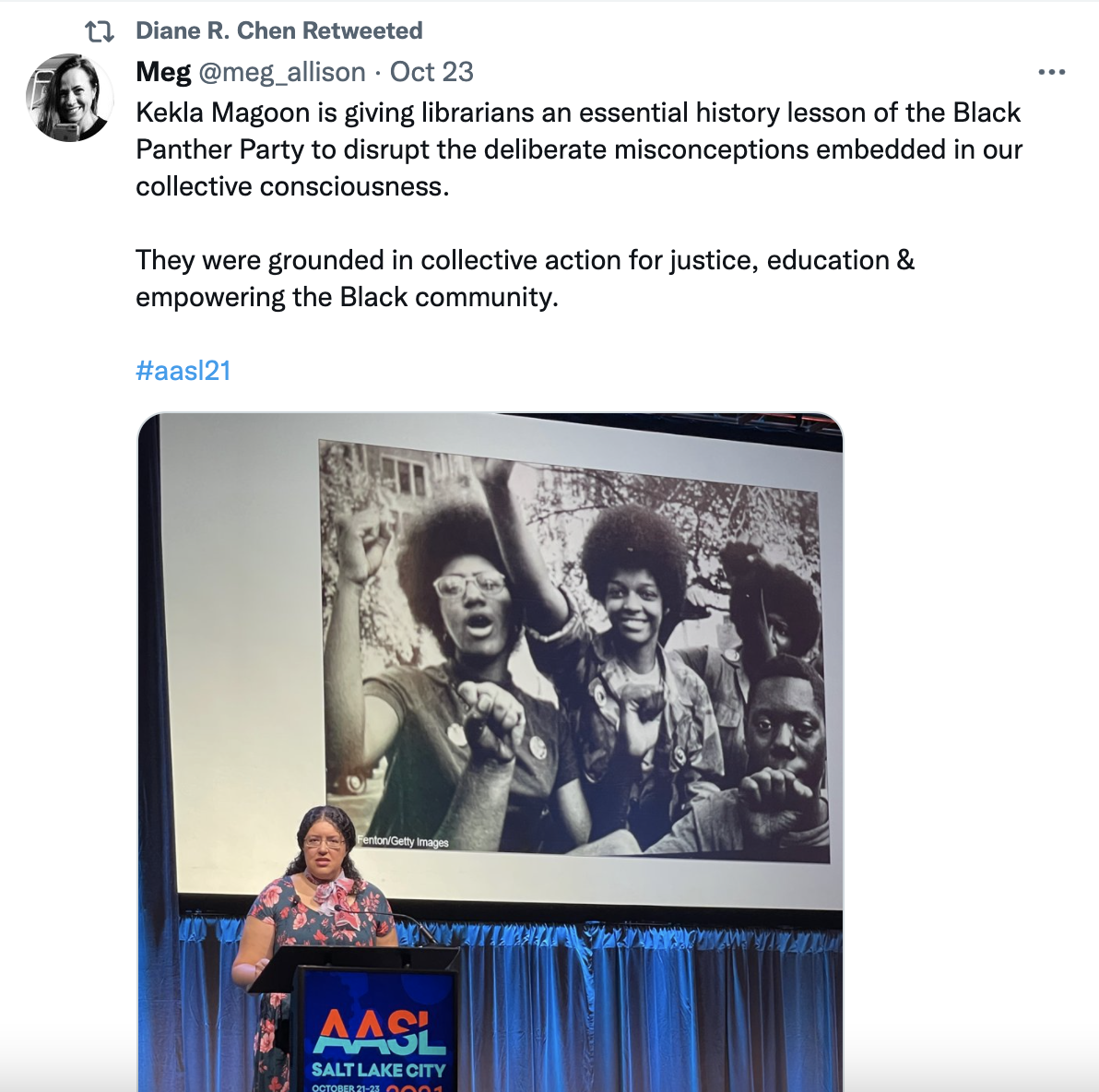 Director-at-large Becky Calzada echoed the idea that “book banning” targets “books by BIPOC and LGBTQ+ authors” and President-elect Kathy Lester retweeted a claim that parents who want pornographic images removed from their schools have an “authoritarian impulse.”

The AASL board told the Daily Caller that it could not provide comment during the holiday week.

The American Library Association (ALA) — the umbrella organization for the AASL — comports to many tenets of critical race theory and “anti-racism.” According to the ALA’s website, the organization “recognizes that institutionalized inequities based on race are embedded into our society and are reinforced through social institutions and further perpetuated by policies, practices, behaviors, traditions, and structures. And, since libraries are a microcosm of the larger society and play an important and unique role in the communities they serve, they must seek to provide an environment free of racism.”

The ALA also encourages its “membership, libraries, vendors, and stakeholders” to implement anti-racism policies and “support anti-racism work within the broader society.”

“American Libraries,” the ALA’s publication, published an article by a Portland Community College librarian encouraging “critical librarianship,” which tells librarians to promote social justice in “every area” of their work including “reference to library instruction, collection development, cataloging, and storytime.”

“Many librarians are thinking about how they can fight for social justice in their work, which raises the question of whether that work reflects the neutrality that has long been a value in our profession,” the article reads.

“Critical librarianship” also upholds that “neutrality is not only unachievable, it is harmful to oppressed groups in our society,” according to the article.

“In a world that is fundamentally unequal, neutrality upholds inequality and represents indifference to the marginalization of members of our community,” the article reads.