The article, originally titled “Charli D’Amelio Flaunts Her Undies In A Totally See-Through Lace Look,” included pictures of the minor wearing a sheer outfit over a bra and underwear.

“Serving absolute body, Charli wore nothing more than a black set under a sheer lace bodysuit, with a pair of platform pumps,” Kelsey Stiegman, the article’s author, wrote.

D’Amelio, born in 2004, was dressed up to attend the launch party for rapper Machine Gun Kelly’s nail polish brand, according to Stiegman. She shared photos of the outfit on Instagram. 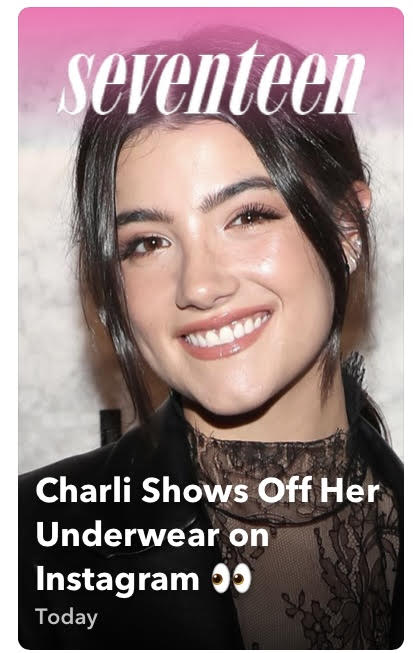 The article was featured on Snapchat, titled “Charli Shows Off Her Underwear On Instagram,” with an emoji of an intrigued set of eyes. (RELATED: TikTok Star Damaury Mikula Arrested After Allegedly Leading Police On Insane Chase)

Images of child pornography are illegal under federal law, including images depicting nudity of minors who are not engaging in sexual acts if the image is sufficiently suggestive. Those who transport child pornography across state lines can face up to 20 years in prison for their first offense.

State laws regarding child pornography vary, but cases have been prosecuted involving girls under 18 sending photos of themselves in a bra and underwear.

Other articles in Seventeen Magazine, which is marketed to teenagers, include “3 Women Talk About What It’s Really Like To Get An Abortion,” “What Happens If You Have Sex with a Tampon In?” and “7 Awkward Things That Happen During Sex and How to Recover from Them.”