A program designed by the University of North Carolina (UNC) teaches 3 and 4-year-old disabled preschoolers to “deconstruct whiteness,” according to a report from Education First Alliance (EFA).

The North Carolina State Board approved the extension of a contract with UNC Chapel Hill’s Frank Porter Graham (FPG) Child Development Center, which has worked with the Office of Early Learning (OEL) of the North Carolina Department of Public Instruction (DPI) since 2013.

The “Equity and Cultural Responsiveness” program defines whiteness as how “customs, culture, and beliefs operate as the standard by which all other groups are compared,” and it encourages “deconstructing whiteness” by “challenging it” and “developing a personal vision for racial justice, and building skills to be accountable allies to people of color.” 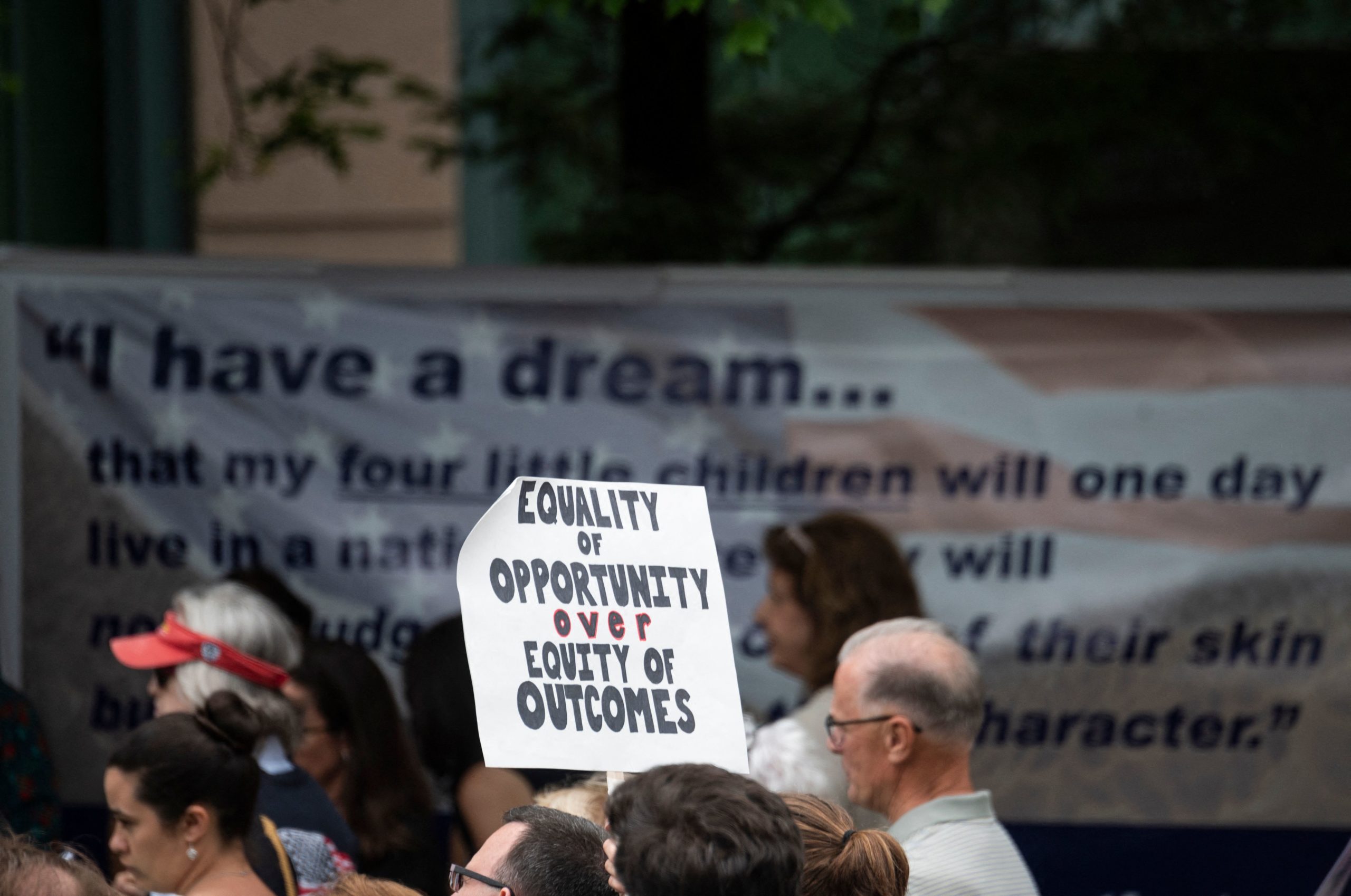 A participant holds up a sign during a rally against “critical race theory” (CRT) being taught in schools at the Loudoun County Government center in Leesburg, Virginia on June 12, 2021. (Photo by ANDREW CABALLERO-REYNOLDS/AFP via Getty Images)

“Yes, we are seeing critical race theory in schools elsewhere, but it’s mainly taught in the higher grades,” Rachmuth said. “But preying on disabled 3 year old children – getting them to participate in a political movement, and to hate themselves based on skin color in the process, shows our public schools to be more morally corrupt than all others.”

The $7 million extension continues the program through 2025, and it is funded through Individuals with Disabilities Education Act (IDEA) Preschool Handicapped Grant awarded to the state by the Office of Special Education Programs (OSEP) at the U.S. Department of Education, according to EFA.

The program explains to teachers that “we are all products of a racialized society” and that “Whiteness affects everything … inside and outside the classroom.”

“When we use Clarifying Conversations we deconstruct whiteness,” according to the program’s training documents. “People experience compounded disadvantages or advantages as a result of intersectionality.”

Founding critical race theorist Kimberlé Crenshaw coined the term “intersectionality,” which the DPI training defines as “a framework that examines the interconnected nature of social categories such as race, class, and gender and how they create overlapping and interdependent systems of discrimination or disadvantage.”

“This Book Is Anti-Racist,” by Tiffany Jewell, discusses the theory of “intersectionality,” which claims that “those with privilege have power over others.” “Folx who do not benefit from their social identities, who are in the subordinate culture, have little to no privilege and power,” Jewell’s book explains.

Another slide instructs preschool teachers on “Building Racial Identity” to ensure that children “question social, scientific, and historical facts,” and it tells teachers to talk about their identity and provide instruction where students “question what they see around them including issues of power and control.”

Teachers are told to “focus on social emotional teaching and learning,” which has been criticized as a tenet of CRT, instead of “control,” which “is based in white normal and is associated with white supremacist thought,” according to the program documents.

State board member Amy White voiced her concerns about the program to Republican North Carolina Superintendent of Public Instruction, Catherine Truitt because she received emails that said the curriculum teaches “critical race theory” and “anti-racism,” according to EFA’s statement.

The program’s “anti-racist work” is “wholly separate from anything they are doing,” Truitt said during a State Board of Education Meeting on Jan. 5. The North Carolina Early Learning Network removed slides, agendas and other program documents an hour after the school board meeting concluded, EFA said.

EFA and other education groups No Left Turn in Education and NC Citizens for Constitutional Rights criticized the state for hiding the program’s materials.

“Hiding this controversial material after questions from the public were raised shows the corrupt and ideological intentions behind these trainings,” said Dr. Nancy Andersen, North Carolina leader of No Left Turn in Education, according to the EFA press release.

“We see the fingerprint of deep-seated systemic disparities and inequities fueled by institutionalized racism, hate, and intolerance,” the statement said.