Teachers from multiple school districts in northern Virginia reportedly vowed to exclude maskless students from their classrooms, according to private social media posts obtained by the Washington Free Beacon.

ACPS seemingly doubled down on masking students and sent an email announcing that the district received a shipment of KN-95 masks and other surgical masks that allow for double masking, days after Youngkin announced the mask mandate repeal. (RELATED: Northern Virginia School Districts Go To War With Youngkin Over Repeal Of Mask Mandates)

Teachers in other districts promised to take on maskless students by themselves. Heather Lynn Reilly Osial, a teacher in Prince William County Public Schools, reportedly said that students who refuse to wear a mask will not be allowed in her classroom.

“Kids will not be allowed in mine [sic] class without a mask. No mask, no entry. If my boss has a problem with that, then she has a choice. Either she wants me there or not,” Osial reportedly said.

Osial told the Washington Free Beacon that she believes her comments were taken “out of context.” She also claimed that the photo used in the article was “photoshopped,” though she did not respond when asked for the accurate photo.

Julie Lawther, a Fairfax High School physics teacher, reportedly tweeted that she created an “isolation bubble” and said she would be “getting a cattle prod” to stave off maskless students.

“FWIW — If they aren’t willing to mask, I’m not coming out from my soon to be upgraded isolation bubble,” Lawther reportedly tweeted. “No mask? You’re on your own… Good luck!” 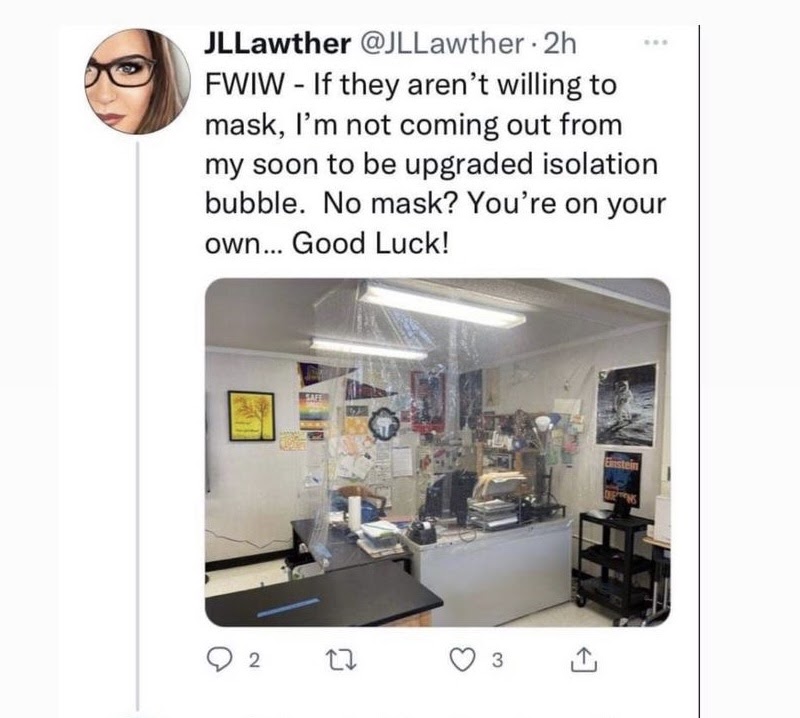 Teachers also took to their employee Facebook pages to air their grievances over the removal of mask mandates. Carol Hensley, a Loudoun County Public Schools (LCPS) biology teacher, said in the LCPS employee Facebook page that if students want to talk to her “they’ll need to put a mask on.”

“I am not going any closer than six feet from an unmasked student. If they want to talk to me, they’ll need to put a mask on. No job is worth my severely at-risk family’s health,” Hensley said.

Erika Enright, a teacher at APS, said in a Facebook group that she will ask children to “sit in the hallway and do their work” if a child “comes into [her] room without a mask on.” Enright told the Washington Free Beacon that she has yet to kick anyone out of her classroom because her “kids understand the importance of face masks.”

“If Youngkin means what he says about this being left to parents to decide, then as a parent of children in APS, I want masks to remain mandatory for everyone in the classrooms,” Enright said.

Canadian teacher Stacey Lance wrote in Bari Weiss’ Substack that students are “taught to think of their schools as hubs for infection and themselves as vectors of disease.”

“This has fundamentally altered their understanding of themselves,” Lance wrote.

Districts and teachers in northern Virginia have made minimal remarks on the social or emotional impact that COVID-19 mitigation efforts appear to have on students’ mental health.