Canadian police have reportedly started sending banks the names of “Freedom Convoy” protesters in a bid to crack down and put an end to the protests.

The Royal Canadian Mounted Police (RCMP) began sending lists of protesters’ names to banks, the Canadian Bankers Association confirmed, according to Bloomberg. Banks are reportedly still unsure how to proceed with the information and are working to get clarification as to what they should do with the protesters’ accounts. Currently, the banking institutions must freeze accounts and report them to the RCMP or Canada’s intelligence service, Bloomberg reported.

“It is happening – I do have the numbers in front of me,” Freeland said without disclosing the actual number, according to Bloomberg.

The move comes after Prime Minister Justin Trudeau invoked the never-before-used “Emergencies Act,” through which he ordered all banks and other Canadian financial systems to freeze the accounts of any client who participated in the protest. (RELATED: Ottawa Police Chief Resigns Amid Trucker Protests) 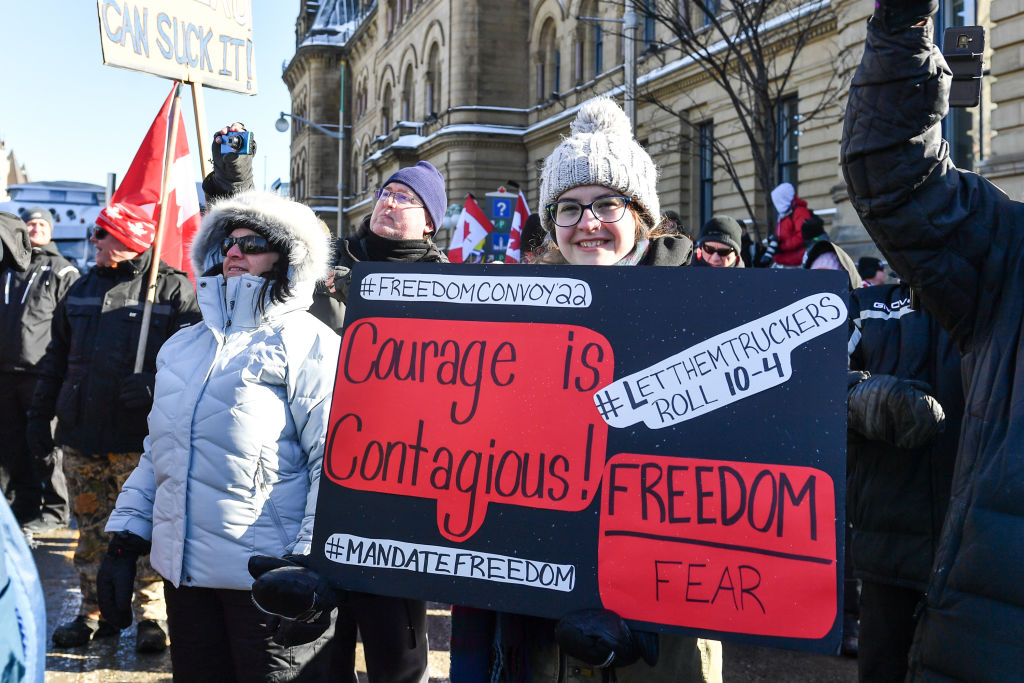 OTTAWA, ON – FEBRUARY 05: A freedom supporter holds a sign in support of the truckers convoy on February 5, 2022 in Ottawa, Canada. (Minas Panagiotakis/Getty Images)

Further, Freeland said Monday the government would be broadening their “terrorist financing” rules to cover crowdfunding platforms raising money for the Freedom Convoy.

“We are broadening the scope of Canada’s anti-money laundering and terrorist financing rules so that they cover crowd funding platforms and the payment service providers they use. These changes cover all forms of transactions … the illegal blockades have highlighted the fact that crowdfunding platforms and some of the payment service providers they use are not fully captured under the Proceeds of Crime and Terrorist Financial Act.”

Executive Director of the Canadian Civil Liberties Association, Noa Mendelsohn Aviv, expressed concern over the emergency orders regarding the financial system, according to the report.

“If somebody else does agree with it and wants to bring coffee to the protesters, are they now indirectly involved? And you can turn their information over to the financial institutions who will turn their information over the security services, services, freeze, their assets?” he said in an interview, according to Bloomberg. “There is nothing that I’ve seen so far on my understanding of the orders that limits it. They are very broad in scope.”