There is a lot that American media is getting wrong in its coverage of Ukraine, fueling a firehose of misinformation that is only leading to “psychological terror” for Ukrainians, according to local journalists on the ground.

“Some media get the wrong translation… Maybe due to the fact that they don’t have good translators, or do it fast [through] Google translate. They distort the information,” she continued, mentioning how CNN wrongly translated Ukrainian President Volodymyr Zelensky’s “ironic” post about Feb. 16 being the day the invasion would start, and “contributed to panic in the media.” (RELATED: Biden Admin Has No Idea Whether Ukrainian President Was Joking About Invasion Day)

Common mistakes are seen in headlines and framing, as outlets repeatedly imply the Russian threats to be caused by Ukraine.

Wording issues, like saying “Ukraine crisis” and “Ukraine conflict,” and not “Russia’s war against Ukraine” is also misleading, and puts blame on the victim, rather than placing emphasis on Russia’s 130,000 soldier troop buildup on Ukraine’s border, being cyberattacked and the eight-year war in Eastern Ukraine, Matviyishyn continued. 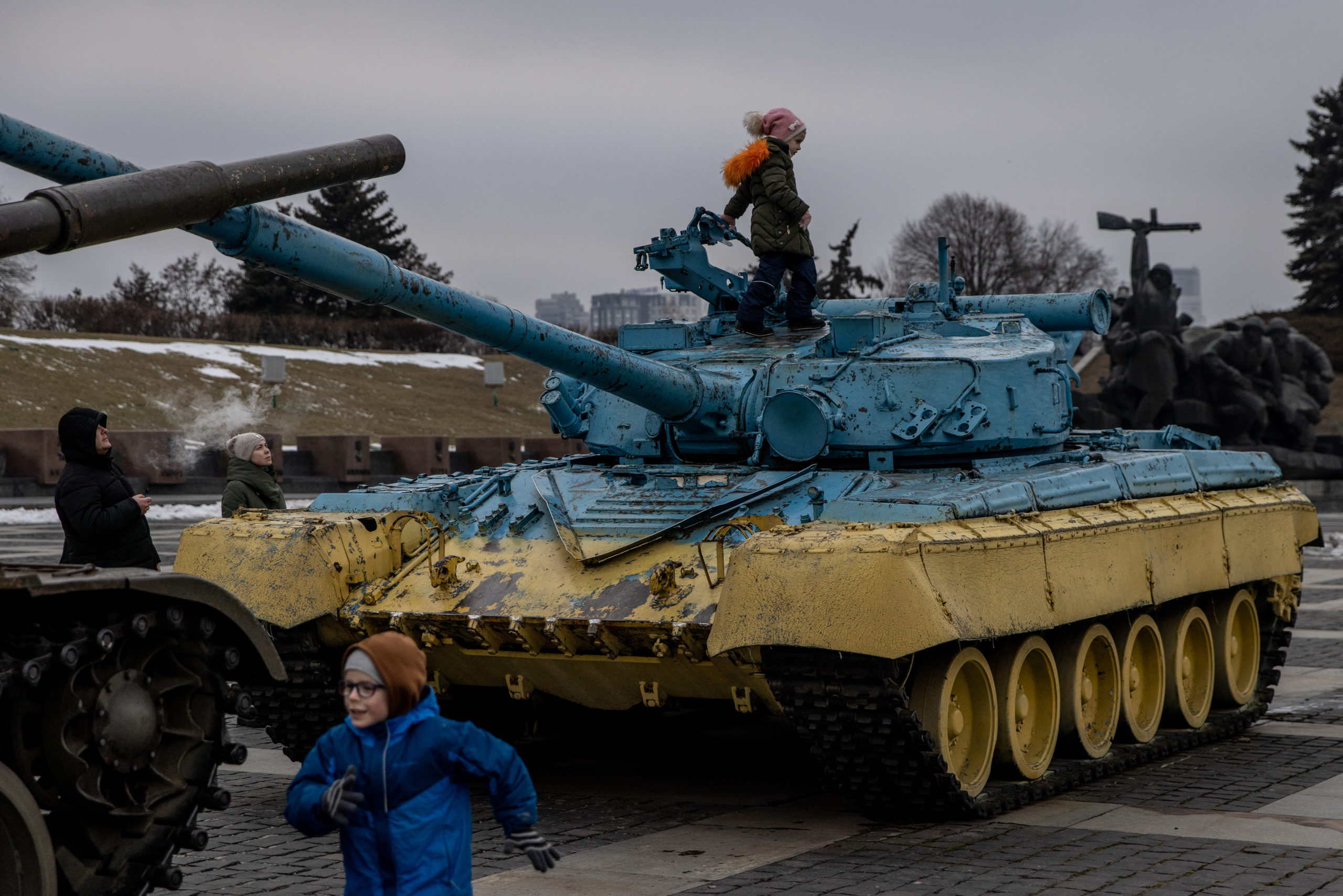 KYIV, UKRAINE – FEBRUARY 16: Children play on tanks displayed at the Motherland Monument on the newly created “Unity Day” on February 16, 2022, in Kyiv, Ukraine. “Unity Day” was created by Ukraine’s president this week, in response to news reports that February 16 would be the date Russian forces invade Ukraine after Russian forces have been massing on the Ukrainian border over the past months. (Photo by Chris McGrath/Getty Images)

Melanie Podolyak, a Ukrainian blogger covering the situation on the ground, said that talking about the conflict like it’s brand new is also a false narrative, as the war has been ongoing for eight years in Eastern Ukraine.

“It’s not about to start, it’s been going on for eight years. We have lost control of huge parts of our land — Crimea, some of the Donetsk and Luhansk regions… We have lost thousands of people,” and “millions have been displaced,” Podolyak told the Daily Caller. (RELATED: How Young Ukrainians Are Preparing For Possible Invasion)

When speaking about the eight-year conflict in Donbas, “many American journalists and TV channels say ‘in Donbas the Ukrainian army is fighting against the Russia-backed separatists,’ which makes readers believe the conflict is to a larger extent an internal one, although it is clear that, despite some Ukrainians indeed serve in the Russian armed formations in the East, the war is between Ukraine and Russia,” Yusupov said.

Journalists that have never covered Ukraine or are traveling to the country for the first time sometimes lack context about geography, culture, history and knowledge of the language, Matviyishyn continued, noting that Eastern Europe correspondents usually work in the Russia bureau, not in Ukraine.

To all Russia-Ukraine «experts» with « US intelligence sources», sitting somewhere West and safe: think twice and maybe wait to get more clearance before you tweet. It’s not about your retweets and followers but our lives here, in Ukraine. Imagine reading all this for a month

Some foreign journalists coming to Ukraine and expecting to see “panic,” don’t understand that “everyone is really exhausted,” Podolyak added. Ukrainians “have learned a lot from these eight years, and panicking is not our friend. Because information spreads very quickly, Ukrainians have become very picky” about what they choose to believe.

Yusupov concluded that U.S. media rushing to publish “unclassified intelligence” is detrimental to the situation on the ground.

“American media published lots of unclassified intelligence about potential full scale Russian invasion” which, although sometimes arguable, “caused panic among some people in Ukraine, especially in the cities which border Russia,” he said, noting that it is important to consult independent American and Ukrainian military experts to see the whole picture.