Cultural overreach during the COVID-19 pandemic could spring Republicans into office in the nation’s largest state, California Republican gubernatorial candidate Anthony Trimino told the Daily Caller in a recent interview.

Latino voters swung towards the Republican Party in large numbers during the 2020 election cycle, and the trend appears to be continuing into the 2022 midterms. Republican Virginia Gov. Glenn Youngkin may have secured the majority of the Latino vote in 2021, and Republicans won several mayoral races in heavily-Latino border areas in Texas. Eight Latino Republicans won Texas’ first-in-the-nation congressional primaries on March 1, and Republicans also increased their primary share in the state’s four southernmost counties, which are over 90% Hispanic.

“I think there’s an awakening happening within the Latino communities, where they’re realizing they’re being forced to redefine their political values, and I think they’re asking themselves the questions that are truly necessary to understand how to vote. I think they’re finding they’re a lot more conservative,” Trimino, whose grandparents fled Cuba’s Communist Revolution, told the Daily Caller.

Trimino cited the increased salience of cultural issues for the move of Latino voters towards the Republican Party across the U.S. and in California in particular.

“You’re seeing the attack on the church. You have a governor in California who has abused his power for over two years now, shutting down churches. Obviously the Latino community is very religious, whether that’s Christianity, or Catholicism, or any number of religions,” Trimino said, noting capacity restrictions as well as bans on singing. “Imposing those kinds of unrealistic mandates on the church really provoked and woke a lot of people up.” 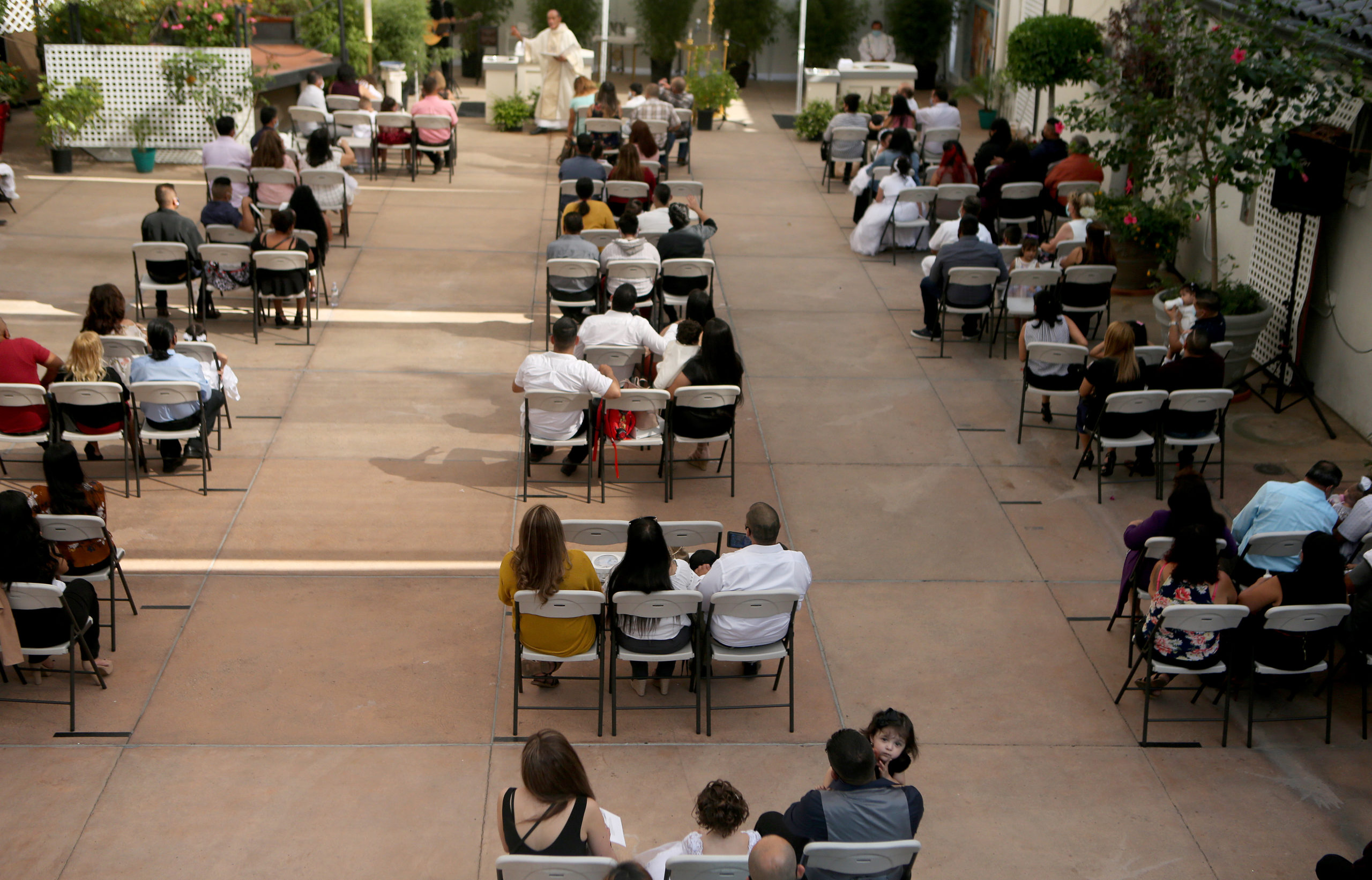 LOS ANGELES, CALIFORNIA – SEPTEMBER 26: The Rev. Arturo Corral (TOP L) speaks during socially distanced baptism ceremonies at the historic Our Lady Queen of Angels (La Placita) Church amid the COVID-19 pandemic on September 26, 2020 in Los Angeles, California. Congregants from separate families are seated in socially distanced chairs and are required to wear face coverings to prevent the spread of the coronavirus. (Photo by Mario Tama/Getty Images)

San Franciscans voted by about 50 points to recall three members of their school board in February after the board was slow to adopt a post-COVID-19 reopening plan but spent a significant amount of time renaming schools. The board also eliminated merit-based admission to a prestigious magnet school in the city, with members claiming that the school’s racial composition was evidence of discrimination. (RELATED: San Francisco Board Of Education’s Document Arguing For School Renamings Is Riddled With Historical Errors)

Trimino described the vote as a bellwether for the governor’s race and the 2022 congressional midterms.

“There’s a reckoning coming. People are done, they’re tired. And it goes back to what’s happening to our kids,” he said. “You’ve now provoked people that don’t see party lines.”

“The parties are dying,” he claimed. “The Republican Party, the Democratic Party, they’re on life support. There are more people moving to the middle than ever before. People are disenchanted with the parties. They may have voted Democrat but ultimately we see Democrats leaving the left in droves. We see even people leaving the right and trying to find a place in the middle where it’s no longer about politicians and no longer about party, but it’s about quality of life. So that’s our focus.”

Party preferences have flipped in the year since President Joe Biden took office, a January Gallup poll found. When Biden assumed the presidency, 49% of Americans identified as Democrats or Democratic-leaning, compared to 40% who described themselves as Republican or Republican-leaning. By 2022, 47% leaned Republican, and 42% supported Democrats. Those numbers marked the largest gap in favor of Republicans since Gallup began administering the poll in 1991.

Gallup: In 2021, Republicans went from a 9 point deficit in party identification to a 5 point lead.

If that were to hold into the 2022 midterms it would be a seismic victory on election night – this is the biggest advantage for Republicans since the 1994 “Republican Revolution.” pic.twitter.com/jQQGEGAcJT

Some Republican Senate candidates, such as Ohio’s J.D. Vance and Arizona’s Blake Masters, argue that GOP officials should oppose the business community, claiming it is out of step with conservative voters on major issues. The founder of a marketing firm, Trimino believes that California’s business community, parents, and other key constituencies are on the same side of issues related to COVID-19, public safety, and government spending and taxes.

“Ultimately, we’re going to toe a line of justice, of right and wrong, of serving the will of the people. Those things that exist that do not serve the will of the people will be stomped out. There will be no refuge for people that want to commit crimes, in our streets or in our tech companies that try to strip away our God-given, inalienable rights.”

“I want to make California the most business-friendly state in the nation, and I want tech to thrive here. I want big corporations to thrive here, and I want manufacturing to thrive here, but not at the expense of robbing people of their rights, their liberties, their privacy, or their First Amendment” rights, he explained.