Jenner attended the awards show with boyfriend Travis Scott and their 4-year-old daughter Stormi, PageSix reported. The youngest of “The Kardashian” sisters sported a long-sleeved Balmain gown that gave the optical illusion of being see-through, despite her actually being completely covered up, the outlet reported. (RELATED: At Least Kendall Jenner Wore Bottoms To Promote Poolside Tequila For Coachella Weekend)

Jenner and Scott recently welcome their second child, a son who was originally named Wolf. The couple then announced they were changing his name, but have yet to reveal their son’s new identity. Jenner gained 60 pounds during her most recent pregnancy and has subsequently lost at least 40, another PageSix article noted. 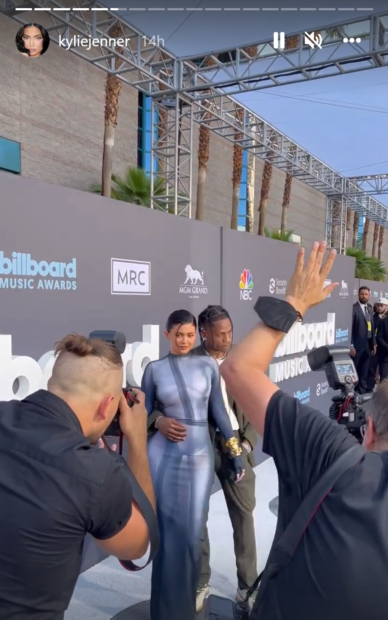 She looked incredible, if a little alien-like, during the red carpet on Sunday. Actress Bella Thorne has also sported a “naked” dress, PageSix noted, saying that Jenner’s choice was perfectly on-trend.

Scott wore a green suit and white T-shirt to the event, which took place in Las Vegas, PageSix reported. Scott was scheduled to perform publicly for the second time since 10 people died and countless were injured at his Astroworld Festival. He also played at megaclub E11even’s Miami Grand Prix celebration in early May, as well as playing various private concerts since the tragedy, PageSix reported.