The Biden administration has insisted that record-breaking gasoline prices are solely caused by Russia’s war in Ukraine. The claim is false and “laughable,” economists told the Daily Caller.

The White House often describes higher prices at the pump as “Putin’s price hike,” but prices were going up steadily after President Joe Biden took office. The price already increased by 55%, rising from a U.S. average of $2.11 when Biden took office to $3.51 the day before Russian President Vladimir Putin decided to invade Ukraine, according to Forbes.

“The ‘Putin’s price hike’ is laughable – and you can tell because no matter how hard they try to advance this particular little bit of propaganda absolutely nobody but White House spokespeople use the word,” John Cochrane, a Hoover Institution senior fellow, told the Caller.

“The administration wants to blame anybody but itself for the challenges of the American economy. [‘Putin’s price hike’ is] a good talking point because there’s a sliver of truth in it,” President of the American Institute for Economic Research, William Ruger, told the Caller in an interview.

The current U.S. average price of gas sits at $4.59 per gallon and prices in California have reached as high as $7.25 per gallon.

“Inflation is the problem. We have more money essentially chasing the same number of goods,” Ruger said. He added that demand bouncing back from the COVID-19 pandemic and a lack of supply to meet the increased demand is the other main factor.

Biden waged an “all-fronts war on oil and gas,” and “virtually every step” his administration took “was the opposite of what needed to be done,” Institute for Energy Research senior economist David Kreutzer told the Caller.

Biden stymied future production of gasoline by canceling the Keystone XL oil pipeline, halting the sales of a drilling area in Alaska and two in the Gulf of Mexico, and banning new oil and gas leasing on public lands. (RELATED: Biden Cancels More Oil And Gas Leases As Fuel Prices Skyrocket)

“If the global supply of oil is low, we should ask who canceled the Keystone Pipeline on his first day in office, why fracking is banned in many states, and so forth. Hobbling U.S. energy investment has been the deliberate policy of the administration from the first day in office,” Cochrane said.

“The administration should have accelerated approval of pipeline permits, instead of blocking and cancelling them. It should not have cancelled leases that had already been issued. It should not be using regulatory agencies like the Security and Exchange Commission and appointments at the Federal Reserve to hobble investment in oil and gas production,” Kreutzer said.

Benjamin Zycher, an economist and senior fellow at the American Enterprise Institute, told the Daily Caller that Biden’s mistake was “adopting an ideological stance in opposition to fossil fuels.”

“Political/ideological attack on fossil-fuel and fossil infrastructure investment implies higher future prices, and thus higher prices now because the market reallocates oil over time so that the expected price at any given moment rises at the market rate of interest,” Zycher said.

Many policies of the Biden administration were “little more than knee-jerk ‘let’s cancel Trump’ policies,” Steve Hanke, a professor of Applied Economics at the Johns Hopkins University, told the Daily Caller. He also served on former President Ronald Reagan’s Council of Economic Advisers, where he was responsible for energy policy.

“The White House spin-machine has the rhetoric about the gasoline price hikes all wrong. In truth, the headlines accompanying the hikes should read ‘Biden’s Gas-Price Hikes,'” Hanke added.

“What Americans are learning is that there is no such thing as a green free lunch,” he said, adding that there was also a big increase with “Biden’s ban on the importation of Russian oil” in March. 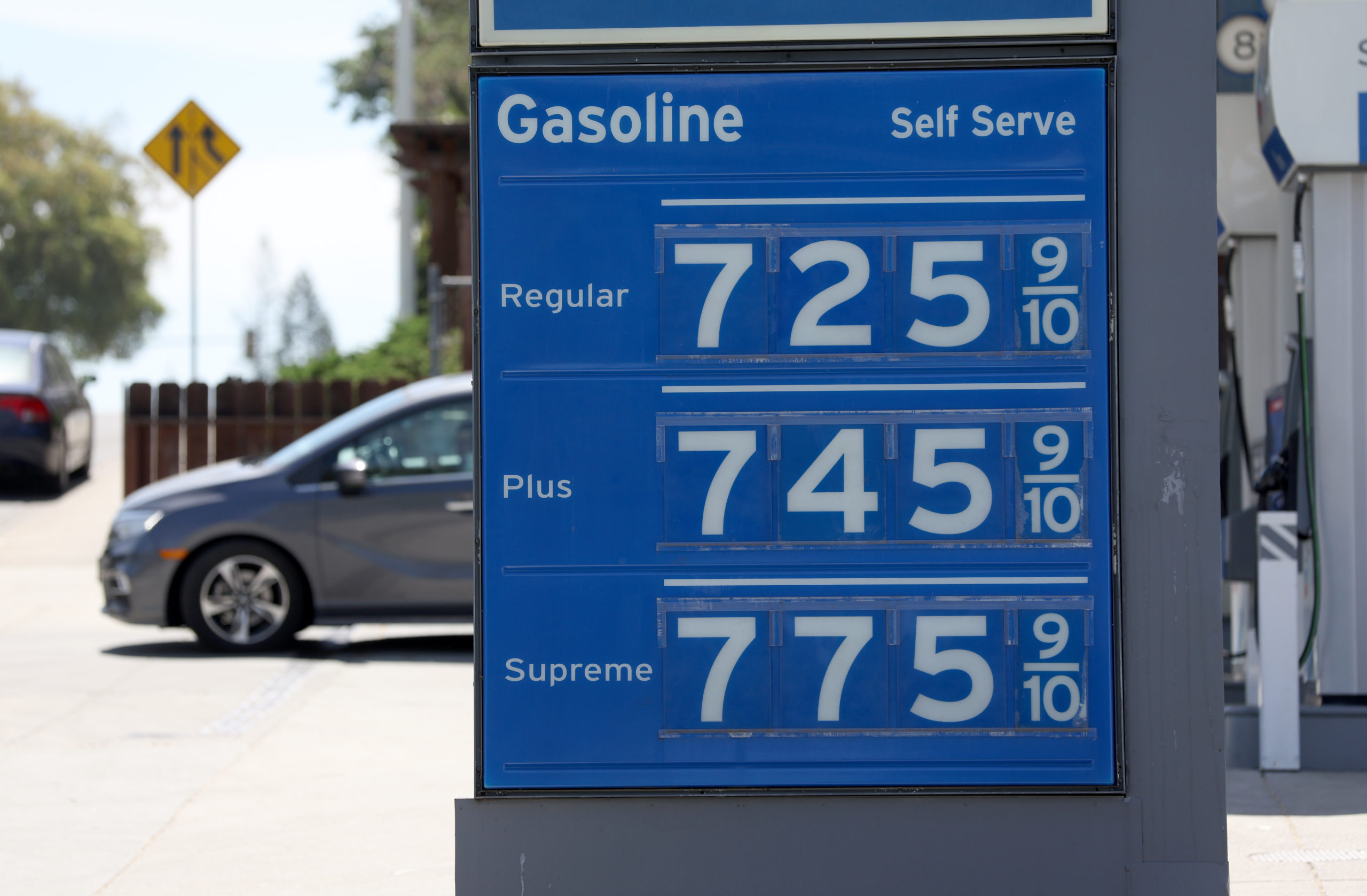 MENLO PARK, CALIFORNIA – MAY 25: Gas prices over $7.00 a gallon are displayed at a Chevron gas station on May 25, 2022 in Menlo Park, California. As gas prices surge to record highs across the United States, the San Francisco Bay Area has the highest prices in the country where the average price of a gallon of regular gasoline is $6.06. The average national price is $4.59 per gallon. (Photo by Justin Sullivan/Getty Images)

Fixing the lack of supply won’t come overnight, but the Biden administration should be “reducing the barriers to new production” of gasoline and have “less regulation,” Ruger said.

“The oil industry is extremely limited in its capacity to accelerate production due to labor and equipment shortages,” but long-term solutions include “expanding leasing and permitting on federal lands,” Garret Golding, a business economist at the Federal Reserve Bank of Dallas, told the Daily Caller.

“There are not many tools for the federal government to do anything with immediate effect on gasoline prices outside of the Strategic Petroleum Reserve,” he added.

Former Economic Council chair under the Obama administration, Jason Furman, agreed with Golding that Biden did “the right thing in releasing oil from the strategic petroleum reserve.”

Like the Biden administration, he also said Putin is the primary person to blame.

“The main factor that has contributed to the high price of gasoline is President Putin’s invasion of Ukraine which has raised global prices,” he told the Daily Caller. The rise in gasoline prices prior to the Russia-Ukraine war “were more of a return to the normal level of prices that prevailed before the pandemic—after the unusually low price of gasoline in 2020 when travel was greatly reduced,” he said.

Furman conceded that gas costs were “about 10 percent above what one would have expected pre-COVID, which likely has a variety of causes.”