Senate Bill 711 passed with bipartisan support in the Republican-controlled Senate with a 35-10 vote, ensuring its way to the State House of Representatives where it is expected to meet more opposition.

The bill would allow the prescription of medical marijuana for 15 medical conditions among including cancer, PTSD, epilepsy and Crohn’s disease. Notable exemptions in this list include glaucoma, anxiety, chronic pain and opioid addiction, which are commonly covered in other states’ bills, according to The New & Observer.

Republican North Carolina State Sen. Bill Rabon, the bill’s main sponsor, expressed urgency in legalizing medical marijuana due to the colon cancer that almost took his life 20 years ago. He said he believes marijuana can make a significant difference in the quality of life with chronic diseases. Rabon told The Assembly, “every session we wait, every day we wait, someone’s gonna suffer that could benefit.”

Delmer Langley, the owner of D.E.L. Hemp Farm — Wilson County’s only commercial hemp grower — told the Daily Caller that if Bill 711 becomes law, the plan is to expand into medical marijuana, but noted it may be difficult due to licensing. “I would love to do it, but they’re only going to hand out 10 licenses in North Carolina, and then 10 licenses can have four brokers under it,” Langley said. (RELATED: California Doctor Loses License After Prescribing Cannabis To A Four-Year-Old)

Under the current version of the bill, only 10 medical marijuana supplier licenses would be issued, according to cannabis business outlet MJBizDaily. Under each of these licenses, each holder is permitted to open up to four dispensaries.

Democratic State Sen. Julie Mayfield has expressed her concern about the vertical structure of these licenses which favor large corporations, the outlet noted.

Langley said he was confident the Compassionate Care Act would pass the state legislature. “I don’t know why it won’t pass the House,” he said. “I’ve talked to some representatives, and they said everybody signed off on it pretty quick.” Langley declined to elaborate on whether he believes that Democratic North Carolina Gov. Roy Cooper would sign the bill if it reached his desk. 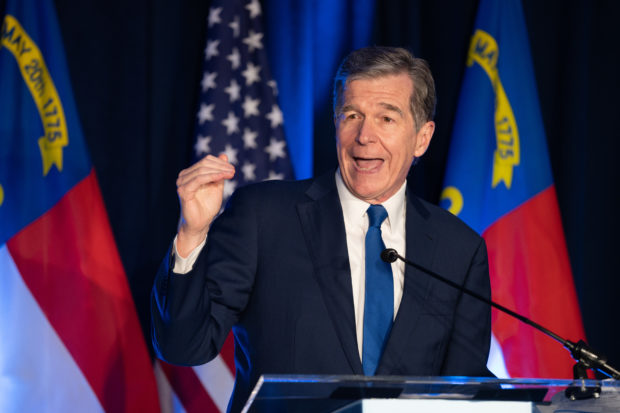 According to NORML’s Smoke The Vote Initiate, a pro-marijuana reform organization, gave Cooper a “B” rating due to his history of supporting studies that indicate medical marijuana’s positive benefits as well as for creating the Task Force for Racial Equity in Criminal Justice (TREC) which recommended decriminalizing marijuana possession. According to a 2016 candidate guide from the Huffington Post, Cooper wants to move slowly and study the impact in states that have legalized it.

The Daily Caller contacted Gov. Cooper’s office for comment but did not receive a response.