Environmental groups are condemning fossil fuel provisions in the Senate Democrats’ $369 billion climate spending package that will work to slash the nation’s carbon emissions and invest billions of taxpayer dollars in the green energy industry, according to statements released by climate activists.

Democrats were compelled to include provisions in the bill, dubbed the Inflation Reduction Act, that will allow for the drilling of oil and gas on more federal lands in order to get Democratic Sen. Joe Manchin of West Virginia’s crucial vote in the Senate. However, the Center For Biological Diversity and Greenpeace were enraged by the bill’s support for certain fossil fuel policies, arguing that the concessions to the oil and gas industries will hurt the climate, according to press releases. (RELATED: ‘Egregious’: Coal Industry Leaders Condemn Manchin-Backed Climate Bill)

“This is a climate suicide pact,” said Brett Hartl, government affairs director at the Center for Biological Diversity. “The new leasing required in this bill will fan the flames of the climate disasters torching our country, and it’s a slap in the face to the communities fighting to protect themselves from filthy fossil fuels.”

The bill allows drilling and pipeline arrangements in Alaska, Appalachia and the Gulf Coast. Moreover, a companion bill to the spending package, passed on Friday, will reinstate Trump-era permitting reforms to expedite fossil fuel projects. The plan would mandate that before any new solar or wind energy is installed, the Interior Department must provide at least 2 million acres of public lands and 60 million acres of offshore waters for oil and gas leasing each year for a decade.

No utility-scale renewable energy project on public lands or waters could be allowed if the government didn’t offer these minimal amounts for lease. The lease amount must be offered for a minimum of ten years under the act, meaning that more than 600 million acres of offshore leasing could result from the bill. 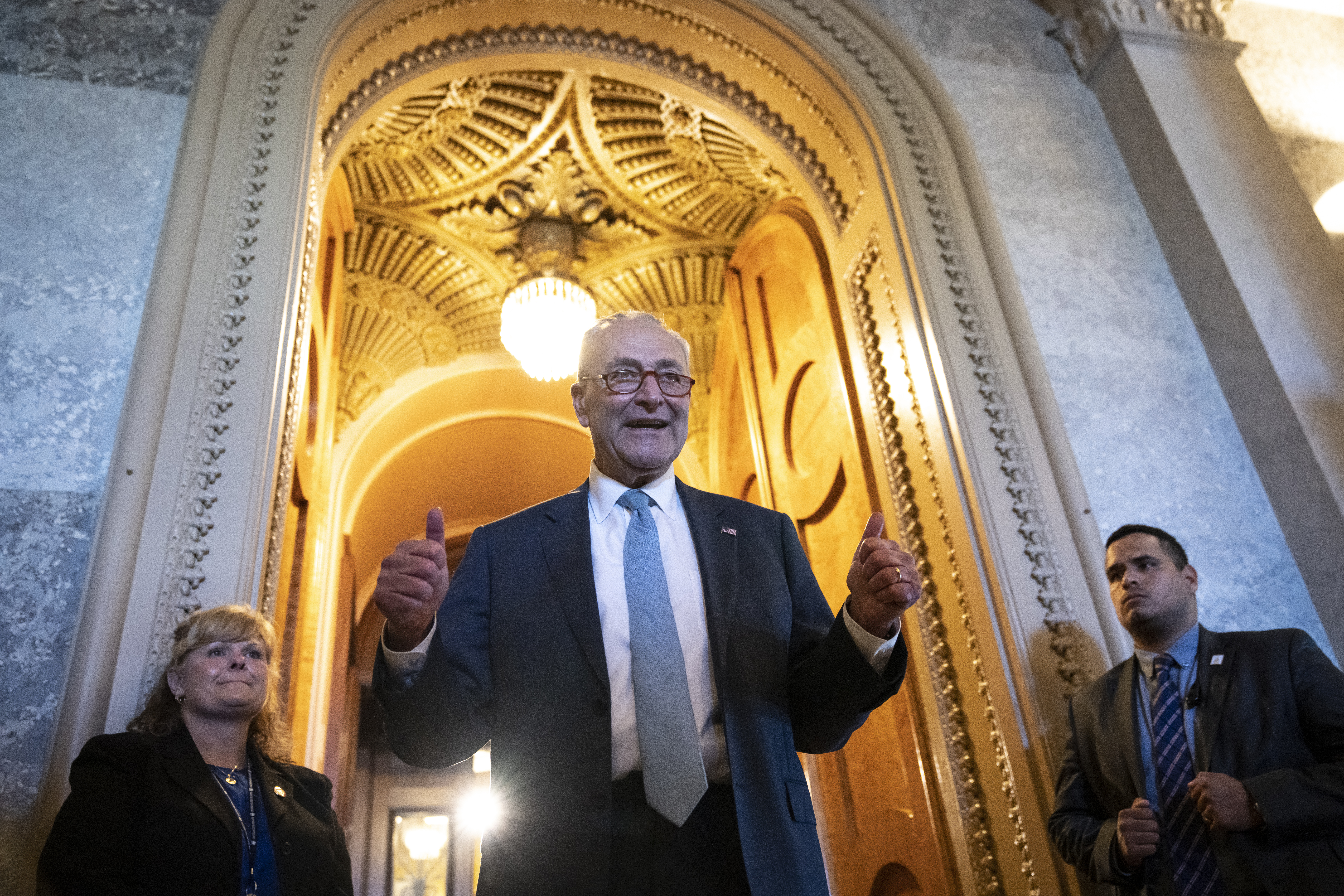 WASHINGTON, DC – AUGUST 7: Senate Majority Leader Chuck Schumer (D-NY) gives the thumbs up as he leaves the Senate Chamber after passage of the Inflation Reduction Act at the U.S. Capitol August 7, 2022 in Washington, DC.

“The IRA is packed with giveaways to the fossil fuel executives who are destroying our planet,” said Greenpeace USA Co-Executive Director Ebony Twilley Martin.

Some of the climate actions in the spending package include methane taxes on oil companies and the revival of a long-expired Superfund 16.4 cents per barrel tax on crude oil and petroleum products, according to the bill’s text. The law generates around $25 billion in taxes over the next ten years by reintroducing the Superfund tax on crude oil received at refineries and on petroleum products imported into the country for consumption, use or storage.

Scientists estimate that the bill may help drive down carbon emissions by about 42% from 2005 levels by 2030, according to a report from the Princeton University-led REPEAT Project. The bill, which includes new tax provisions to pay for the historic $739 billion climate and health care spending package, has been hailed as a huge victory for both President Joe Biden and Senate Democrats.

Climate activists’ reactions to fossil fuel provisions in the bill come amid the Biden administration’s efforts to push through its ambitious climate agenda as well as elevated gas prices. Greenpeace also demanded that President Joe Biden declare a climate emergency in their statement.

The Center For Biological Diversity declined to comment on the matter. Greenpeace did not immediately respond to the Daily Caller News Foundation’s request for comment.