Democratic Michigan Gov. Gretchen Whitmer and a nationwide party organization are revoking support from a candidate for state legislature who allegedly threatened to shoot up his middle school and leaked nude photographs of his then-13-year-old girlfriend.

Maurice Imhoff, a 20-year-old from south-central Michigan, is running in House District 46 to become the youngest representative in the history of the Michigan legislature. He currently works for the Michigan AFL-CIO, and his website claimed support from some of the state’s most prominent Democratic officials, most notably Gov. Gretchen Whitmer.

“I tried to break up with [Imhoff] again and what did he do? Threatened to shoot up Northwest Middle School. He sent messages to students he posted it to his story. He brought a fake weapon to school to scare students even more. It worked. He had everyone scared. The police were called and he was obviously arrested,” the ex-girlfriend wrote in the Facebook post.

She also shared Snapchat screenshots of Imhoff appearing to threaten the school shooting.

“I’m a fucking I’m crazy mf terrorist,” he apparently wrote in a Facebook message shared by his ex-girlfriend.

After Imhoff was released from jail, he returned to Northwest Middle School despite being expelled, the ex-girlfriend continued in the post. He then sent the girl’s naked photos to her mother and several classmates after she did not respond to his text messages, according to the post.

The Daily Caller could not independently verify the ex-girlfriend’s allegations. She did not respond to a request for comment from the Daily Caller.

The Jackson Police Department did not immediately respond to the Daily Caller’s request for comment on any threatened school shootings during the 2016-17 school year, citing a backlog in official requests for police records. The Detroit News reportedly obtained police reports indicating that Imhoff’s threats were investigated by law enforcement.

Democrats around the state and nationally are distancing support from Imhoff’s campaign.

“The allegations are serious and concerning. Governor Whitmer does not support Maurice Imhoff’s campaign for State Representative,” Maeve Coyle, a spokeswoman for Whitmer’s campaign, said in a statement to the Daily Caller.

The Democratic Legislative Campaign Committee (DLCC), which supports Democrats running for state and local offices, listed Imhoff as a “Spotlight” candidate as recently as Oct. 2. It has since removed him from its database of endorsed candidates, with the DLCC website reading “page not found” where Imhoff’s profile previously existed.

The DLCC did not respond to the Daily Caller’s request for comment on the status of Imhoff’s endorsement.

In addition to Whitmer, Imhoff’s website boasted endorsements from Lt. Gov. Garlin Gilchrist, Attorney General Dana Nessel and Democratic Michigan Rep. Debbie Dingell. Aside from a campaign appearance with Nessel, however, Imhoff does not appear to have interacted with any of those named officials. (RELATED: ‘I’m Not Changing The Way I Run This State’: Whitmer Refuses To Apologize For Coronavirus Restrictions)

Imhoff also listed Secretary of State Jocelyn Benson as endorsing his campaign. Benson does not “endorse in races for which she is responsible for overseeing as the state’s chief election officer,” a spokeswoman for the secretary of state’s reelection campaign told the Daily Caller.

The Benson campaign called Imhoff’s endorsement claim “demonstrably false and misleading” in a letter to the Imhoff campaign, obtained by the Daily Caller.

A representative for the Dingell campaign did not respond to the Daily Caller’s request for comment on the status of her endorsement.

The Democratic elected officials who supported Imhoff are campaigning in large part on abortion rights and women’s issues. Whitmer and Nessel opposed a 1931 state law prohibiting abortion, filing lawsuits to overturn it in the aftermath of the Supreme Court’s Dobbs decision. Whitmer also designated abortion providers essential businesses during COVID-19 lockdowns, claiming family planning, including abortion, is “fundamental” and “life-sustaining.”

“I will not enforce it, and neither will I defend it. I will take no part of driving women back into the dark ages and the back alleys,” Nessel said of the state’s abortion ban.

Nessel appeared at Imhoff’s official campaign launch July 2 in Jackson, Michigan, tweeting she had a “great time.” After the Daily Caller contacted Nessel for comment, she deleted the tweet in question. Her campaign did not respond to the Daily Caller’s request for comment on the status of her endorsement. (RELATED: Michigan AG Dana Nessel Calls For ‘A Drag Queen For Every School’ During Woke Conference) 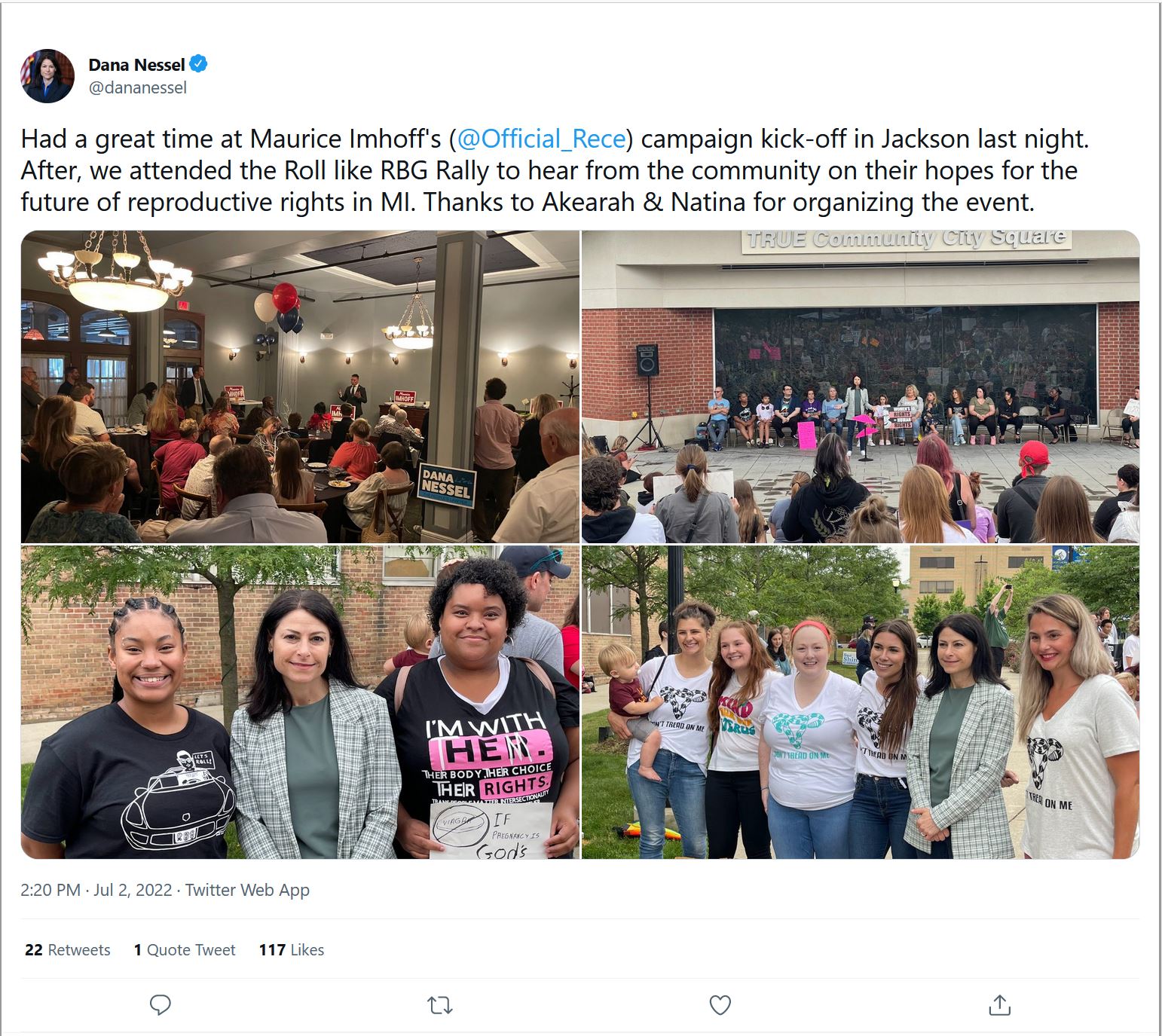 Imhoff’s campaign did not respond to several requests for comment from the Daily Caller on the matter. The campaign later password-protected its entire website.