Saudi Arabia rang in the new year with a mass execution of 47 suspected terrorists on January 2nd, and they want you to know it. 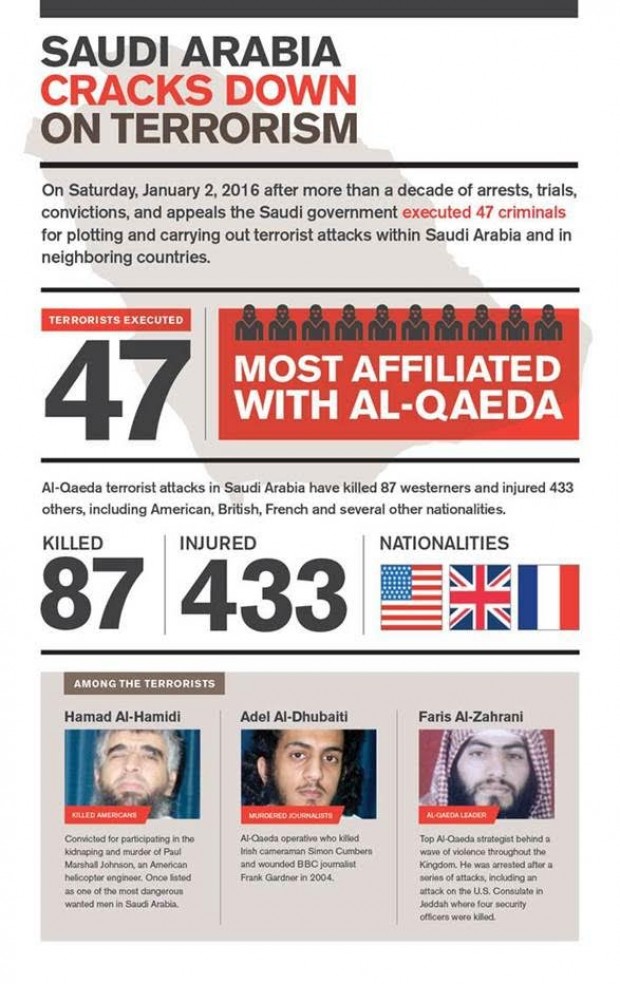 The info graphic, provided to The Daily Caller News Foundation by Saudi Arabia’s U.S. embassy, was sent out to the embassy’s press list. Saudi Arabia claims 87 Westerners have been killed in Saudi Arabia by al-Qaida terrorists.

Among those executed were Hamad al-Hamidi, Adel al-Dhubaiti and Faris al-Zahrani. Al-Hamidi allegedly participated in the kidnapping and murder of Paul Marshall Johnson, a U.S. citizen working as an engineer in Saudi Arabia. Al-Dhubaiti was found guilty of murdering Irish cameraman Simon Cumbers and paralyzing BBC security consultant Frank Gardner in 2004. Al-Zahrani was considered a “top al-Qaida strategist” by Saudi authorities who allegedly took part in an attack on a U.S. consulate in Saudi Arabia that saw four security personnel killed.

The embassy’s announcement comes after Saudi Arabia announced its establishment of an anti-terrorism coalition made up of Muslim nations in December. The Saudi-led coalition has yet to see any tangible commitments from member states. (RELATED: Saudi Arabia Sets Up Anti-Terror Coalition, Yet Still Sponsors Terrorism)