Washington, D.C., was paralyzed by one inch of snow Wednesday night just weeks after experiencing unusually warm temperatures over the Christmas holiday.

Staring at about 7 p.m., D.C. was hit by a flurry of snow that caused massive traffic jams as people rushed home or to the grocery store to stock up food for the climate chaos predicted to hit the region Friday and Saturday. (RELATED: One Image Shows How Unprepared DC Is For Friday’s Blizzard)

Major freeways were turned into parking lots, according to The Washington Post. Thousands of people were stuck for hours — some as long as 13 hours — trying to make their way home amid the snow. 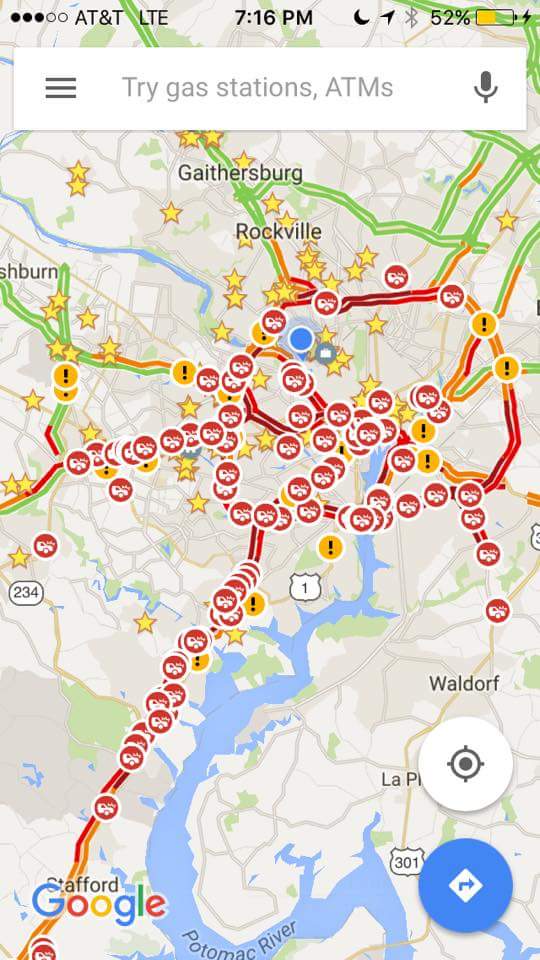 “I left Fairfax at 6:20. It is 1:40 in the morning,” a hotline caller told The Post. Another told the paper: “I am on Indian Head Highway. It has not been treated. This is unbelievable. This is pathetic. This is not managed government.”

“I am sitting on the Beltway in Oxon Hill at a complete stop for an hour and a half. This is really painful,” bemoaned another caller.

Others took to Twitter to vent their frustration — probably since they were sitting in their cars and not moving for hours. Some of the tweeters’ remarks made D.C. seem like some post-apocalyptic nightmare.

Outside for less than 5 minutes and saw a bus plow into a median and people start screaming at it. Its Mad Max here, folks. #dcsnow

Buses stranded all the way down Porter in NW #DCsnow #Snowpocalypse all over again with an inch on the ground pic.twitter.com/Sb2yPt9mRn — Michelle Babin (@meeshbabs21) January 21, 2016

If this is how D.C. handles an inch of snow, residents should really prepare themselves for the climate chaos headed to town Friday.

The Weather Channel reports D.C. and other major cities “will be significantly impacted by this storm with heavy snow and strong winds, bringing travel to a grinding halt, between Friday afternoon and Sunday morning.”