[dcquiz] Barack Obama slammed Hillary Clinton’s campaign for president with a joke claiming it was “not entirely persuasive” during the White House Correspondents’ dinner.

During Saturday’s dinner, Obama commented on Bernie Sanders’s slogan “Feel the Bern — “it’s a good slogan.” Then with a less than subtle sisyphean reference, Obama said, ” Hillary’s slogan has not had the same effect. Let’s see this.” (RELATED: Comedian To Obama At White House Correspondents’ Dinner: ‘You Did It, My N**ga’ [VIDEO]) 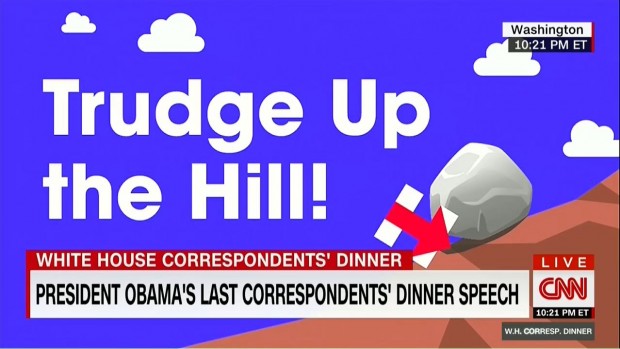 “Look, I’ve said how much I admire Hillary’s toughness, her smarts, her policy chops, her experience. You’ve got to admit it, though, Hillary trying to appeal to young voters is a little bit like your relative who just signed up for Facebook,” Obama joked. (RELATED: Barack Obama Mocks Donald Trump During White House Correspondents Dinner)

Imitating Clinton, Obama said, “‘Dear America, did you get my poke? Is it appearing on your wall? I’m not sure I am using this right. Love, Aunt Hillary.'”

After the laughter and applause subsided, Obama said, “It’s not entirely persuasive.”

For those unfamiliar with Greek mythology, Sisyphus was eternally punished for his craftiness and deceitfulness by having to push a massive boulder up a hill to only have it roll back down to the bottom once he neared the top of the summit.