During the Thursday report on “ABC World News With David Muir,” Llamas said, “Hillary Clinton, firing back with this tweet here, ‘Delete your account.'” (RELATED: Clinton Tells Trump To ‘Delete’ His Twitter Account, Reminds Everyone About Her ‘Wiped’ Email Server)

The show chose to broadcast screenshots of Trump’s initial tweet, “Obama just endorsed Crooked Hillary. He wants four more years of Obama—but nobody else does!” as well as Clinton’s reply of “Delete you account.” 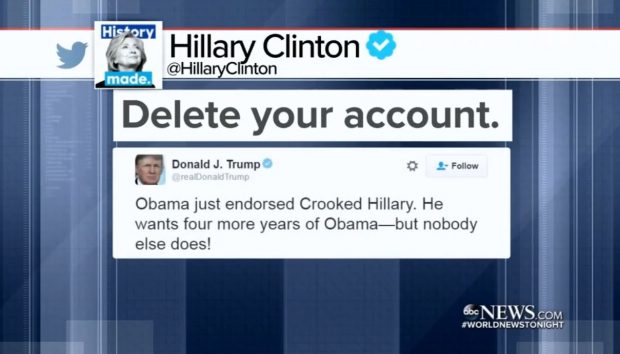 Llamas continued his report saying, “Tonight, the Clinton team telling us that this is the most popular tweet of their entire campaign. David at last check,  more than 250,000 retweets. But of course, Donald Trump firing back as well with his own tweet saying, ‘How long did it take your staff of 823 people to think that up,’ David.”

Despite looking down at his phone to read the tweet, Llamas did not read it in its entirety. The ABC reporter left out the second part: “and where are your 33,000 emails that you deleted?”

How long did it take your staff of 823 people to think that up–and where are your 33,000 emails that you deleted? https://t.co/gECLNtQizQ

The ABC broad cast did not show a screen shot of  Trump’s rebuttal to Clinton.

Clinton claimed that she deleted more than 30,000 “personal” emails from her account