Last week, Hugh Hewitt called on the GOP to “change” the nominee from Donald Trump, but on Thursday, the conservative radio host explained his support of the Republican party’s presumptive nominee. 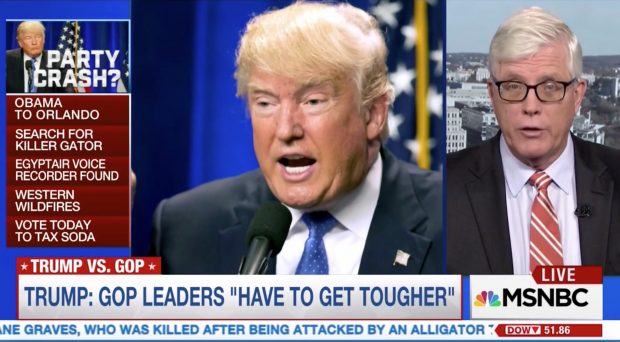 Appearing on “MSNBC Live” with Tamron Hall on Thursday, Hewitt said, “In 1964, Barry Goldwater had extraordinary difficulties with party leadership. In fact, late in June in 1964, a bunch of Republican governors and then former vice president Richard Nixon got together in Cleveland to try and remove Goldwater. Didn’t work. You can’t do that. It’s very hard to do. And so eventually they either fall silent or get behind you.” (RELATED: Hugh Hewitt: Scrap Trump. Keeping Him Is ‘Like Ignoring Stage IV Cancer’ [AUDIO])

“What Mr. Trump needs is to rally the party and the party needs to be ralliable,” Hewitt said. “I was a critic of Trump but as I wrote in The Washington Post today, it’s a binary choice. People can vote for Hillary Clinton or Donald Trump. One of those two are going to be the next president given that they are both presumptive nominees and everyone ought to focus on that choice because Secretary Clinton for reasons I can go through… is disqualified from being the commander in chief.” (RELATED: Campaign Co-Chair To Republicans: Get Behind Trump Or ‘Shut The Hell Up’ [VIDEO])

Hewitt went on to cite Clinton’s use of a private email server and account while secretary of state and her “disastrous foreign affairs record.”

“I think it helps Republicans and conservatives to focus on Hillary Clinton, President Obama and not on their disputes over the best set of tactics to follow,” Hewitt said. (RELATED: Hewitt: Orlando Attack ‘Strengthens The Case’ For Christie, Cotton As Trump’s VP [VIDEO])

In an lengthy op-ed in The Washington Post, Hewitt wrote that the “prospect of another President Clinton, especially a Clinton who is so mired in scandal, compromised on national security and is the author of so many foreign-policy meltdowns, has a way of concentrating the mind. For the good of the country, Republicans have to be clear about the binary choice in front of us, close ranks around Trump and encourage him to eschew the frivolous and move ahead with a serious message.”

Hewitt concluded his op-ed arguing, “Two weeks ago, in her own national-security speech, Clinton said that the United States can’t ‘roll the dice’ when choosing our next commander in chief. She’s right. But in this election, it’s she who represents the dangerous choice, not Trump. As more Republicans, and all voters, recognize that risk, the more they will wholeheartedly back the one man who can beat her.”