BuzzFeed‘s Andrew Kaczynski must be pretty pumped to leave the news organization that his new boss, Jeff Zucker, has been mocking.

On Monday he announced on Twitter, his online home, that he’s going to work for CNN, a network that also employs his arch rival ex-Donald Trump aide  Corey Lewandowski. HuffPost‘s Michael Calderone broke the news in an actual news report.

“Kaczinsky is a breaking news machine,” said an industry source on condition of anonymity. “Huge loss for Buzzfeed. Huge win for CNN. I doubt he’d have left if Buzzfeed was truly committed to journalism. Especially this close to the election.”

Of course Kaczynski is profoundly thanking his superiors.

Kacyznski is expressing his incredible gratitude by leaving them all in a lurch a month away from the 2016 presidential election.

I’m sure they’re all ecstatically happy for him.

CNN and BuzzFeed have been feuding intensely as of late. In August, Zucker snubbed BuzzFeed in the worst of ways. He told Variety that BuzzFeed and Vice are not “legitimate news organizations.” He also said, “They are … native advertising shops. We crush both of them. They are not even in our same class.”

“The most important test of any news organization this year is its coverage of the 2016 presidential campaign. I’m happy to put our tough, fair coverage up against CNN’s decision to turn its platform over to Jeff’s friend Donald Trump,” Smith told Politico, his ex-employer.

Kaczynski, who made The Daily Caller‘s “16 Men In Journalism With Pussies” list and really fucked up the Boston bombing reporting by tweeting out false information about a suspect, seemed perplexed by the media infighting and managed to compliment both BuzzFeed and CNN. 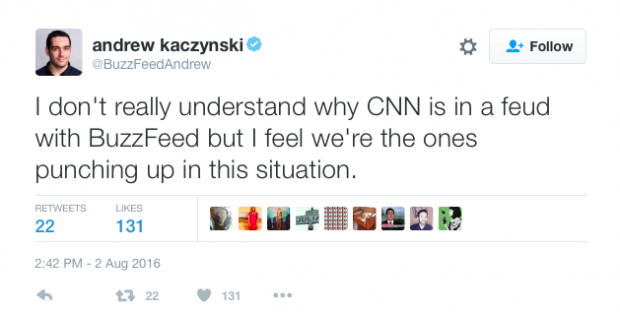 Although he may have some explaining to do for crapping on them back in 2012. 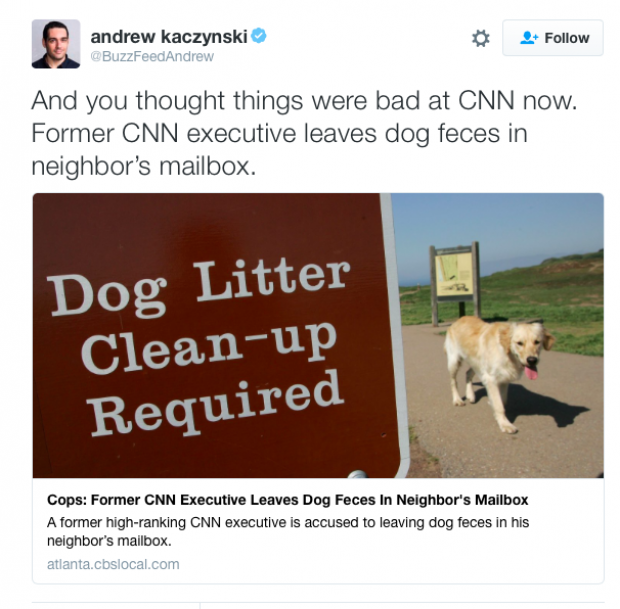 And this one…also in May of the same year. 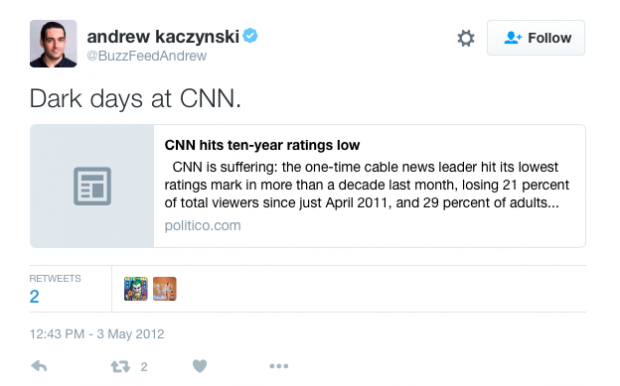 The network’s “dark days” are apparently a thing of the past. Kaczynski is now calling CNN the “biggest name in news.”

“To be at the biggest name in news for the last month of what has been the craziest election in modern history is just a great opportunity for me and everybody on our team,” he told HuffPost‘s Calderone.

In late June, Kaczynski questioned what he believed were CNN’s unethical hiring practices. 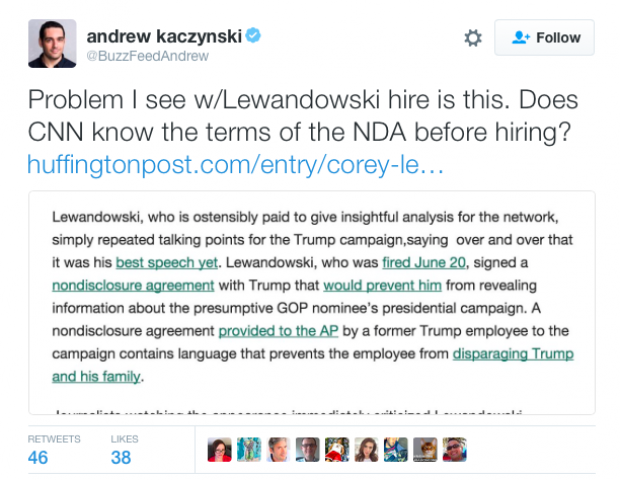 Clearly hiring a Trump insider to boost ratings was obviously a horrible executive decision — who makes decisions based on ratings?

But hiring Kaczynski, who formerly badmouthed CNN, as a firing squad against Trump is perfectly reasonable.