Last week, journalists at a smattering of liberal publications went apoplectic over Jesse Watters recent jaunt into Manhattan’s Chinatown to question people about the presidential election.

Watters received an onslaught of criticism, calling him racist and worse. There was even a protest in front of Fox News HQ in New York that included local politicians.

While Bill O’Reilly says he might have edited the video differently — for instance, removing the elderly woman Watters ridiculed for not understanding him — he stands behind Watters and called him a “gentle satirist.” During an interview on Fox News Sunday over the weekend for his book, Killing The Rising Sun, O’Reilly said he didn’t have time to edit Watters’ segment because he was too busy with election coverage.

O’Reilly said no real backlash was felt until 36 hours after the segment aired.

And even then, he said, it was only because liberal publications made a big stink about it.

The publications that roared about the segment included CNN’s media department, The Daily Beast, Vox, HuffPost, Salon, Wonkette and Media Matters. Journalism Twitter was the most offended of all, with a variety of Asian journalists saying they had never seen anything so offensive and racist. The Asian-American Journalists Association demanded an apology. Rolling Stone contributor Jesse Berney, formerly of the liberal Blue Nation Review, floated the idea of Watters being fired. 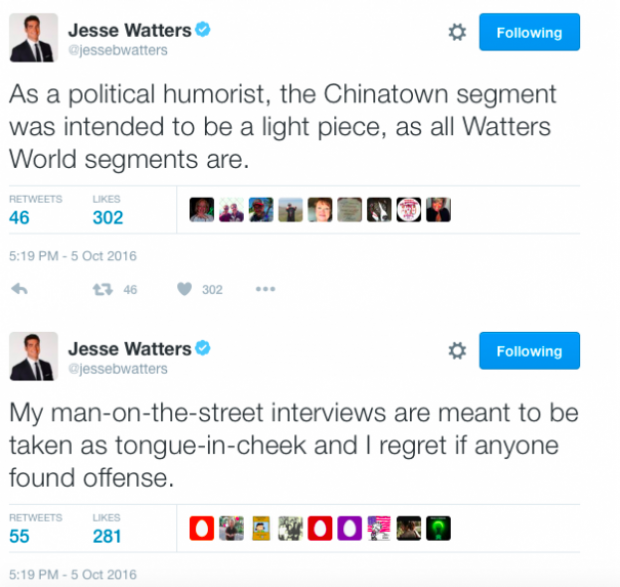 See the video below.