Beltway reporters might want to grab their tic tacs next time they’re around Michelle Obama, considering how enamored of the first lady in her new role as Hillary Clinton‘s biggest fan.

They may not want to make out with her, but they sure have an awful lot of praise for her.

On Thursday afternoon, she denounced Donald Trump at a rally in Manchester, New Hampshire. “I can’t believe I’m saying a candidate for president of the United States has bragged about sexually assaulting women,” Obama said. “I can’t stop thinking about this. It has shaken me to my core in a way I could not have predicted.”

And reporters in Washington could not contain themselves.

NYT and CNBC’s John Harwood, who was caught with his pants down this week in all his lavish praise for Hillary Clinton‘s campaign in his many embarrassing emails to top Clinton aide John Podesta, isn’t even concealing his support for the Democrats at this point.

WTF at this point, right?

Let’s hope Harwood sent this to Podesta so Hillary’s point man knows where he stands.

Harwood can sort of relax. He’s not alone.

The senior producer for Vox.com shed tears over Obama’s speech.

Kasie Hunt is a campaign reporter for MSNBC.

Or is she a consultant at this point? 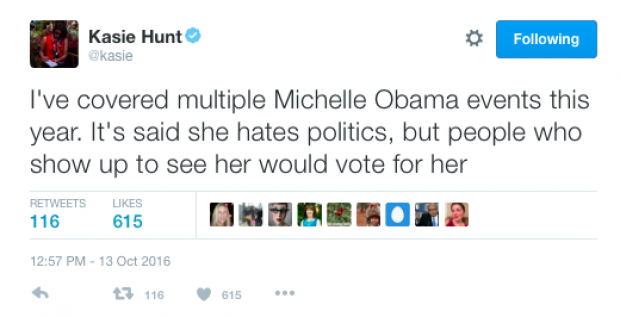 Hunt remarked, “This Michelle Obama speech will be remembered as a major moment in this 2016 campaign.”

Jesse Rodriguez is a senior producer for MSNBC’s “Morning Joe.”

He wrote on Twitter, “Michelle Obama is giving the most powerful speech of the campaign and of her life.”

“Michelle Obama is giving one of the most important speeches of the entire campaign,” he wrote.

Philip Rucker, a political reporter for The Washington Post, was emotionally affected by Obama’s speech. 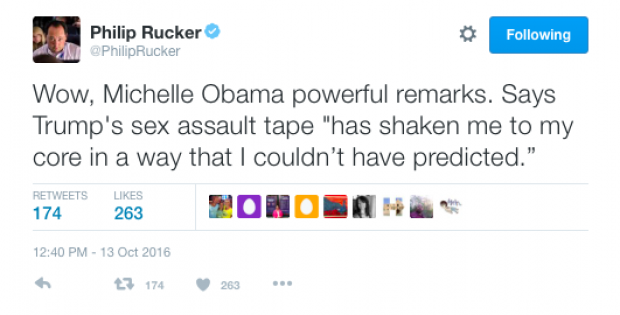 Chris Cillizza, who has been vehemently anti-Trump, is a blogger for The Washington Post and an MSNBC contributor.

He had no problem gushing about the first lady. 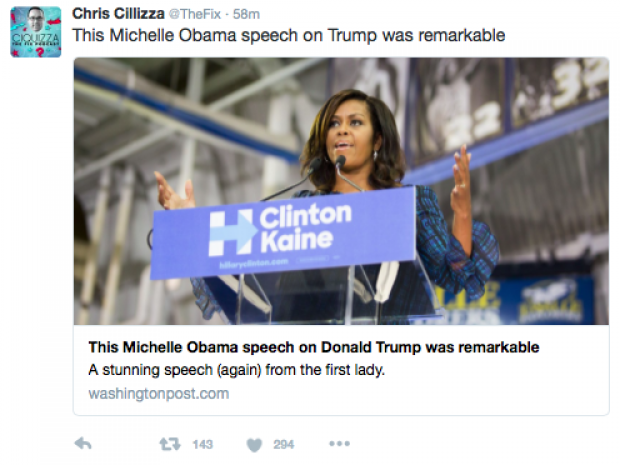 Once he got started, he couldn’t seem to stop himself.

“You should watch Michelle Obama’s speech from earlier today if you didn’t see it,” he wrote.

And this… “The 2 best political speeches this year were delivered by the same person: Michelle Obama.”

Media Matters research fellow Oliver Willis, who writes for an outlet that is an arm of the Clinton campaign, also had deeply positive things to say: “Two Americas and Michelle Obama’s is the real one,” he wrote.

Colin Jones, director of social media, The Daily Beast: “Michelle Obama has never given a speech like this one.”

MSNBC’s Joy Reid: “Michelle Obama is preaching the Gospel of life right now. If you are missing it, please find a way to watch it later.”

Bestselling author Jeff Perlman who wrote, Love Me, Hate Me, Boys Will Be Boys, was likely the most forceful in his praise.

He believes that you must praise Michelle Obama or else you’re racist or sexist.

“Unless you’re a racist or a sexist, I don’t see how one can’t admire Michelle Obama. Politics aside, just a smart, strong, empathetic human,” he wrote.