“’We’ve got some bad hombres here,’ is something The Onion’s version of Joe Biden would say.”

“No Wheaties tonight: Looks like Trump took a chill pill before this debate.” — Adam Nagourney, NYT, in the first 30 minutes of the debate.

“I am against debate questions that we already know the answers to. #Debate” — Mother Jones D.C. Bureau Chief David Corn.

“’Nobody has more respect for women than I do.’ I mean, you can stretch the old girl, but let’s not tear the truth apart entirely.” — Sonny Bunch, executive editor, Washington Free Beacon.

“Oohhhhhhhhhh ‘That’s because he’d rather have a puppet as president’ is a laser from Hillary. Whoa.” — Joel Achenbach, WaPo.

“If this were a high school debate, how obvious would it be that Putin and Trump were secretly dating.” — Derek Thompson, The Atlantic.

“I’m sitting next to @JMatthiasFord and I keep whispering ‘we’re all going to die tonight.'”  — Saeed Jones, BuzzFeed.

“I’ll keep you in suspense” really is one of those things that works better on TV than IRL — Rebecca Sinderbrand, WaPo, deputy national political editor.

“Of course the FIRST point out of Trump’s mouth about the #SCOTUS…was about HIM and how HE was INSULTED? #ImWithHer #debate2016” — Star Jones, attorney, one of the original hosts of ABC’s “The View.”

“Trump just had his moment. But it was him refusing to say he would concede if he lost. So, not a good moment.” — Chris Cillizza, WaPo.

“Why do they even invite a fucking audience?” — Matt Negrin, Bloomberg Politics.

“We are all tired of this, including me. So will slow the pace. But again think of the indefatigability of HRC.” — James Fallows, The Atlantic.

In praise of Chris Wallace: most everyone thinks he did his job

“I guess Chris Wallace is going to treat Donald Trump like a real candidate instead of a clueless, womanizing racist, so this will be lit.” — HuffPost‘s Matt Fuller.

“Chris Wallace is tough and smart – doing well. But he should ask Trump how he backs up claim “no one has more respect for women than I do.” — NPR’s media writer David Folkenflik.

“Chris Wallace is doing a very good job as moderator. Focusing on policy and keeping this from becoming too chaotic.” — The Hill’s Editor-in-Chief Bob Cusack.

Dan Pfeiffer is a former aide to President Obama. You can hear him on the podcast Keepin’ It 1600. 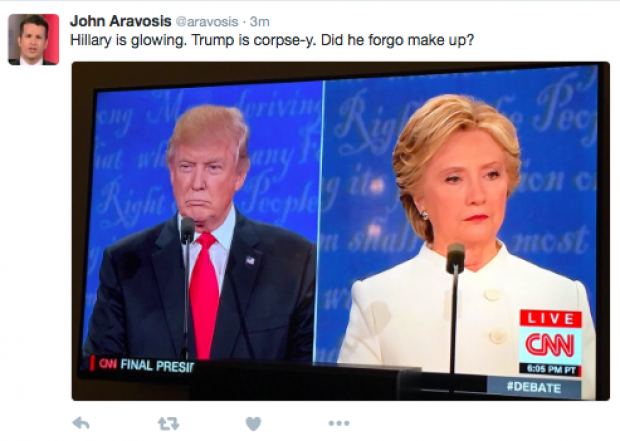 (John Aravosis is a Democratic strategist and editor of AMERICAblog.)

James Fallows goes into a bar and tweets the entire debate 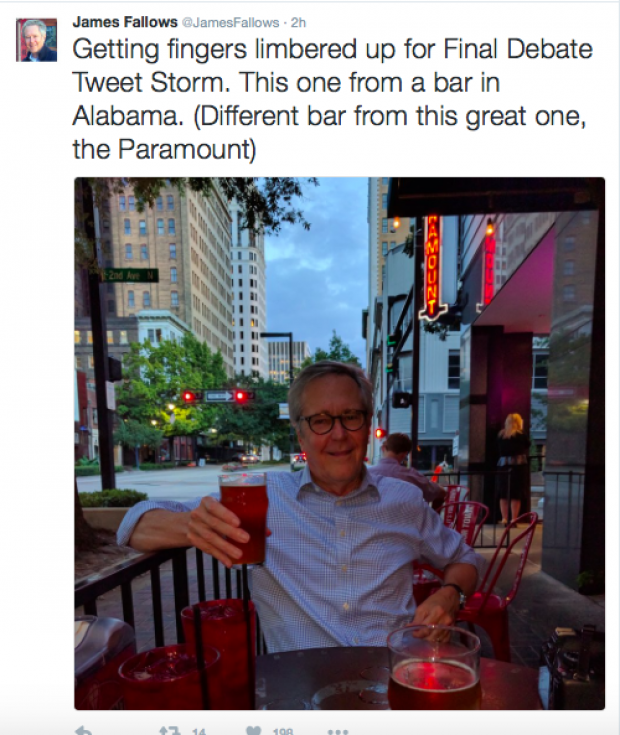 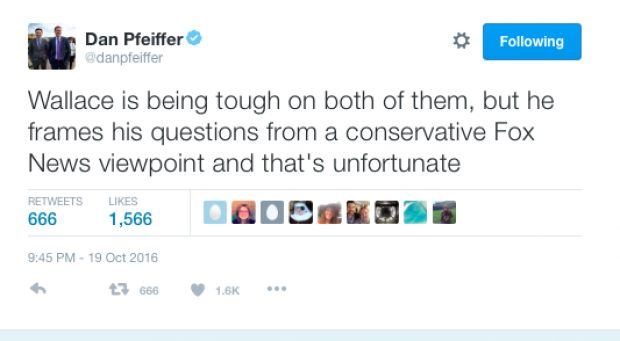 “For the record, I still think Trump has a solid 10% chance of winning the election. But its hard to come up with what would trigger that.” — John Ladarola, ThinkTank, The Young Turks.

“Does Trump have a cold?” — Leon Wolf, managing editor, TheBlaze.

Micah Morrison, of Judicial Watch, replied, “Or has he been sedated?”

“I don’t think anyone is going to be accusing Trump of the whole cocaine thing. Not one sniffle. (A little ritalin wouldn’t have hurt tho.)” — Bill Burton, Democratic consultant.

“Sniffing is back!” — Robin Wigglesworth, US Markets Editor, Financial Times.

The glass is half full (well, sort of)

“Okay, so we’ve started off on a less dumpster fire note than the last debate. That’s something! #debate” — Emily Schultheis, reporter, CBS Politics.

“We’re at the point in the campaign where Alec Baldwin looks more like Trump than Trump.” — Taegan Goddard, editor, Political Wire.

“I got cookies in the oven. First round of cookies was too dang big.” — Ryan Cooper, The Week.

“Why Trump always say ‘in my opinion’ like bitch yea we know, u talking!” — Eve Peyser, night editor, Gizmodo.

“‘Excuse me, my turn,’said the GOP nominee, sounding like every entitled prep school kid I went to college with #debatenight — HuffPost‘s Chloe Angyal.

“This is Trump’s best debate so far, not that it will matter.” — Ramesh Ponnuru, senior editor, National Review Magazine.

“I do think the word ‘bigly’ is Trump’s great contribution to political rhetoric.” — Katty Kay, BBC.

“Let them talk and engage each other!” — DG.

“Can we get a Sesame Street skit where Elmo and Grover go back and forth saying, ‘You’re the puppet! No, YOU’RE THE PUPPET!’ — Jimmy Vielkind. Politico.

“That microphone is going to call Gloria Allred after this debate. #debate.” — Chelsea Handler, comedian, Netflix.

Jerry Springer ‏thinks you should watch his show, not the debate

“Best reason to watch the Jerry Springer Show rather than the Debate…on my stage, the circus only lasts an hour.” — Jerry Springer, talk show host.

“Will Trump accept the results of this election? ‘I will look at it at the time,’ Trump says.
That tears it. He just lost any (slim) hope he had for the presidency.” — Roger Simon, Politico.

“Hearing privately from many reporters that Hillary had a ‘terrible night’ & Trump had best debate. Hope this will make it into print, on air.” — Kellyanne Conway, Trump’s campaign manager.

“‘Such A Nasty Woman’ will someday be the title of a really flattering biography of Hillary Clinton.” — HuffPost‘s Jeffrey Young.

“HRC might have to be helped to the Scooby Dooby Doo Van after debate. @realDonaldTrump brought a gun to the knife fight tonight.” — Gov. Mike Huckabee.

“We’re taking this puppy into the house right now. She’s in a pretty commanding position.” — James Carville on MSNBC regarding his preferred candidate: Hillary Clinton.

The Axe comes down on Trump surrogate Kaleigh McEnany

“I appreciate your undying commitment. I’m just telling you what the facts are.” — CNN Contributor and former aide to President Obama David Axelrod to CNN Trump surrogate Kayleigh McEnany. 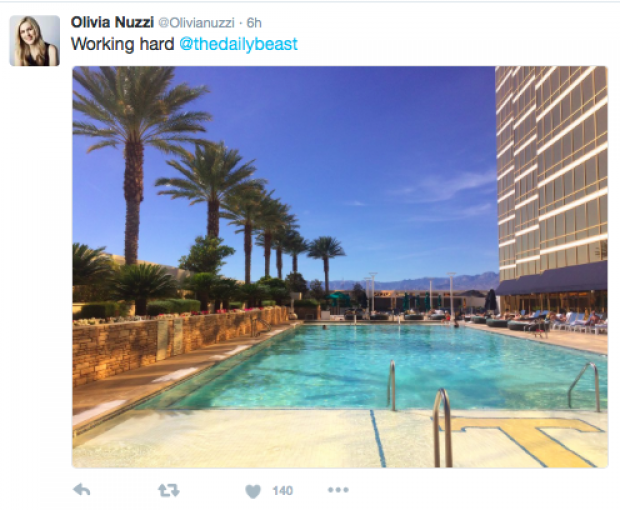 What’s black and white and red all over? 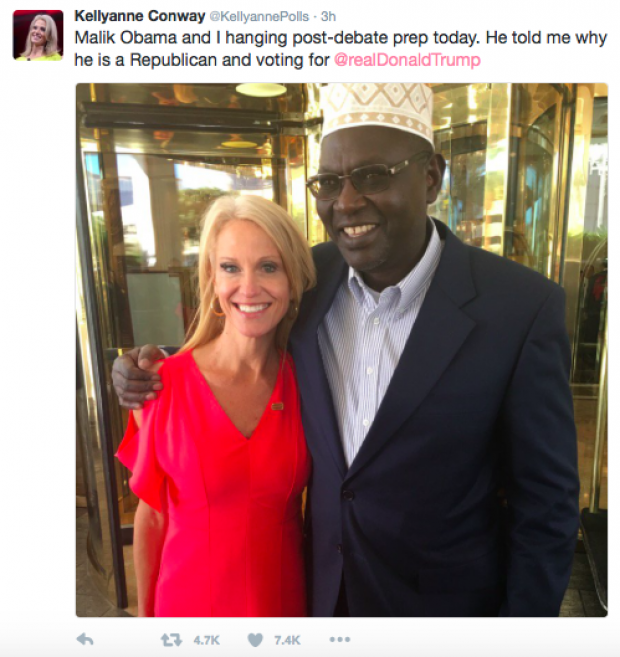