The president of the Sierra Club told his followers on Twitter that now-deceased dictator Fidel Castro is more honorable than President-elect Donald Trump.

Aaron Mair, the current head of the environmental group, told his followers on Twitter that Castro “fought for his country! Still more honor than TRUMP!”

The environmentalist was referring to the death of the former communist dictator, who died Friday night after prolonged ill-health. Castro came to power in 1959 as part of a communist revolution and only stepped aside in 2006.

Mair doubled down on his praise, telling his Twitter followers that Castro was more idealistic than “WANNABE TRUMP.” 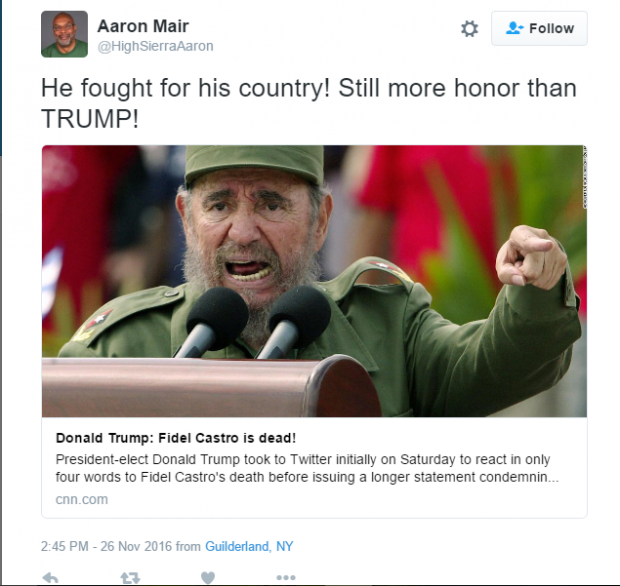 The Cuba Archive Project documented more than 9,200 people killed during Castro’s nearly six-decade regime — the group’s president claims as many as 78,000 were killed trying to flee Cuba.

Trump’s comments about the dictator were less praiseworthy.

“Today, the world marks the passing of a brutal dictator who oppressed his own people for nearly six decades,” the president-elect said Saturday in a statement about Castro’s death Saturday.