“He became President of the United States in that moment.”

— CNN’s Van Jones, referring to when President Trump honored the widow of a Navy Seal who was killed in the Yemen raid.

Okay, back to Trump’s speech…Coulter loved it!

And Joy Behar didn’t hate it…

“This one was de-Bannonized.” — ABC “The View’s” Behar on Wednesday’s program.

But she isn’t totally sold

“I think he will get a bump from this. It may be a limited bump.” — David Axelrod, CNN contributor and former adviser to ex-President Obama on CNN Tuesday night late-night.

“This is the best job Trump has ever done reading from a teleprompter.” — Olivia Nuzzi, New York Mag.

Joe Scarborough, who hosts a show Trump allegedly no longer watches, finds a hero in Trump

Although two male reporters can’t agree on how the Morning Joe co-host landed a spot in the House Chamber for the speech. On his morning program, he said he sat next to his “friend” Rep. Elijah Cummings (D-Md.). He did not bring Mika Brzezinski along.

“For those wondering, Joe Scarborough was at tonight’s #JointSession as a guest of Elijah Cummings (D-Md.)” — CNN media reporter Dylan Byers.

“I can report that @JoeNBC is wandering the House floor shaking hands. Staff tell me as a former member he has lifetime privileges.” — IJR Creative Director Benny Johnson.

David Corn digs in his heels against Trump

“This is fascinating. MSNBC has live footage of Trump sitting in the back of his limo practicing reading his speech.” — The Atlantic’s McKay Coppins.

“Overall I thought that was far better than the dismal ‘American Carnage’ inaugural address. But he gets lost in unwarranted fear-mongering.” — Politico‘s Ben White.

“What the President did w Owen’s widow was capital P Presidential. It was the single most extraordinary moment I’ve seen from Trump – by far. BUT* remember that moment came after Trump seemed to blame his generals/Obama for Owen’s death this morning. And NBC News exclusive reporting: senior intelligence sources dispute WH characterization of raid as success. No significant intel *yet.* … Which would mean that Trump isn’t being honest with a grieving wife. And that is anything BUT presidential.” — NBC News political correspondent Katy Tur.

“‘We just need the courage to share the dreams that fill our hearts’ is like bad politician speech Mad Libs.” — Jon Favreau, former speechwriter to ex-President Obama.

“The Democrats should have had the mother of a sick child deliver the response while cradling her ill baby.” — Mother Jones‘ Ben Dreyfuss.

One hour later, Montel praised Trump: “I agree with @VanJones68 – the moment with #RyanOwen’s widow was both Presidential and unifying. #TrumpAddress.”

To be sure, Montel retweeted his idiotic “political director.”

Washington Free Beacon reporter has something else on his mind… 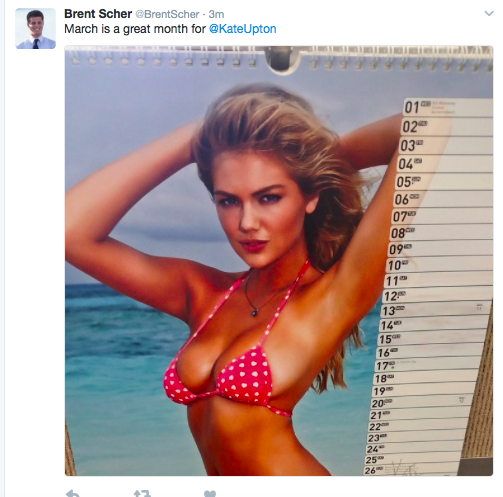 Note to readers: No quotes from The Nation‘s national affairs reporter Joan Walsh because apparently she’s “on vacation.” She said Tuesday that she was boycotting President Trump’s speech. When I called her out for being a “national affairs” reporter who would skip a big presidential speech, she suggested I go on vacation, too.