Marc Raimondi, the national security spokesman at the Department of Justice, confirmed to TheDCNF that Sberbank never registered with the department under FARA. It did not directly register nor was it registered through any other agency such as the Podesta Group.

“The FARA Registration Unit personnel conducted a search related to your questions and can confirm that the search terms — Sberbank CIB USA, Inc., or Sberbank — are not currently (nor previously have been) registered under FARA,” he informed TheDCNF in an email.

The lobbying group of Manatos & Manatos — Podesta’s competition — did register with the Justice Department under FARA when it agreed to represent VTB Capital, Russia’s second largest bank.

David Marin of the Podesta Group told TheDCNF it acted “appropriately” by instead filing with the U.S. Senate under the Lobbying Disclosure Act — or LDA. He justified the move, in part, because its contract was with Sberbank’s New York branch.

“We filed appropriately under LDA because we were working for the U.S. subsidiary,” he told TheDCNF via email. Podesta’s firm received $170,000 to lobby on behalf of the Russian bank for six months in 2016.

That justification was flatly rejected by Ronald A. Oleynik, a partner at the Holland & Knight law firm, who represents foreign clients that face economic sanctions imposed by the U.S. government like Sberbank and VTB Capital.

“FARA is quite clear you can’t hide behind the fact that the U.S. subsidiary hired us rather than the foreign parent,” Oleynik told TheDCNF.

“Someone thought they were doing that because they thought they were clever,” he said. “Shame on them, but it doesn’t change the requirement. It’s not a loophole in any way to say, ‘Oh I’m doing it for a New York corporation, not for the foreign parent.'”

Sberbank was once known informally as the “KGB bank,” and now has a reputation for close ties to Russian President Vladimir Putin and to Russian intelligence services. 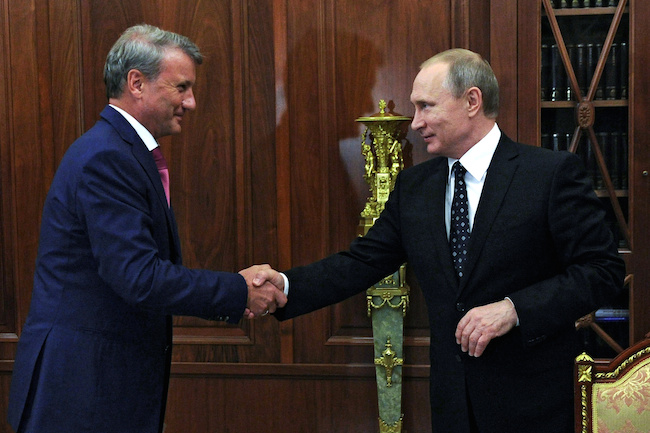 John Schindler, a former National Security Agency analyst and a former professor of the National War College, has charged Sberbank has operational ties to Russian intelligence.

Writing in an opinion article in the New York Observer last April, Schindler asserted that, “funds moving through Sberbank are regularly used to support clandestine Russian intelligence operations, while the bank uses its offices abroad as cover for the Russian Foreign Intelligence Service or SVR.”

“A NATO counterintelligence official explained that Sberbank, which has outposts in almost two dozen foreign countries, ‘functions as a sort of arm of the SVR outside Russia, especially because many of its senior employees are ‘former’ Russian intelligence officers,” he said. “Inside the country, Sberbank has an equally cozy relationship with the Federal Security Service or FSB, Russia’s powerful domestic intelligence agency.”

Sergey Aleksashenko, formerly the deputy chairman of the Central Bank of Russia and later the head of Merrill Lynch in Russia, agreed with Schindler’s assessment.

“It is a long-time tradition that in any state-run bank there are people from intelligence and security services,” he told TheDCNF. “It’s not a big surprise.” Aleksashenko currently is a guest fellow at the liberal Brookings Institution.

Roman Borisovich, who once headed Russia’s largest insurance company and has been a banker in London and on Wall Street, told TheDCNF, “The bank is basically an extension of Kremlin power into the world of finance.”

He said Sberbank’s ties to Russian intelligence agencies clinched it. “It’s all the more reason why they should have registered. They were representing a direct organ of the Russian government engaged in espionage.”

“The truth is you always err in favor of registration, but Podesta didn’t want to register because it wouldn’t look good, even for a Democrat. So, what they did was they didn’t register.”

DiGenova was rueful over the double standard being applied about ties to Russia. “It’s axiomatic that what is forbidden for Republicans is permitted for Democrats.”

It’s also unclear whether the Sberbank lobbyists were truthful when they asserted the bank was facing a cash crunch because of economic sanctions.

A congressional source who sat in on the Sberbank presentations said that the paid lobbyist and Elena Teplitskaya, Sberbank’s board chairman, both claimed they were facing serious cash flow problems because of the sanctions. He talked to TheDCNF only on the grounds of anonymity.

Teplitskaya claimed the bank might be unable to purchase $550 million worth of aircraft from Boeing, and that it also was facing difficulty competing in Europe because of its debt.

However, in a Feb. 22 meeting this year with Putin in the Kremlin, German Gef, Sberbank’s CEO and Chairman, boasted they had the “most successful year ever.”

“As far as our financial results go, it was the bank’s most successful year ever. We earned a net profit of 517 billion rubles, according to Russian accounting standards,” Gef told Putin.

Sberbank’s New York office did not return calls by TheDCNF.