The Pentagon has released several aerial surveillance photos that detail the extensive damage done to a Syrian air base after President Donald Trump’s strike Thursday night.

The photos detail the aftermath of the strike, which included 59 Tomahawk cruise missiles, pointing out particular impact craters and destroyed targets at the Syrian government’s al-Shayrat airbase. 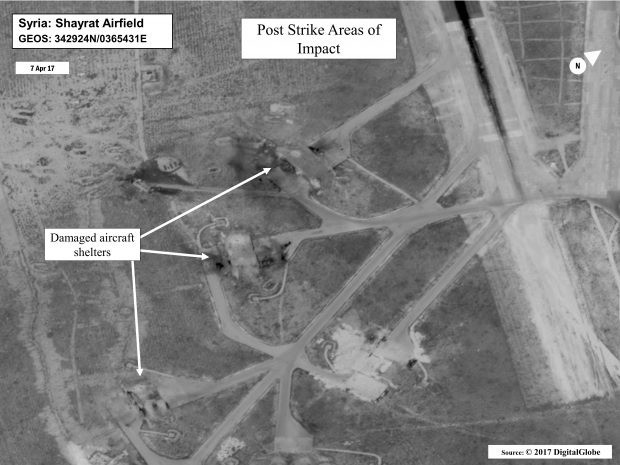 Based on the pictures, it appears the strike specifically targeted the base’s aircraft shelters, which housed the planes reportedly responsible for Tuesday’s chemical weapons attack on civilians in Syria’s northwestern Idlib province. An estimated 72 people were killed in the sarin attack, while possibly hundreds sustained injuries. 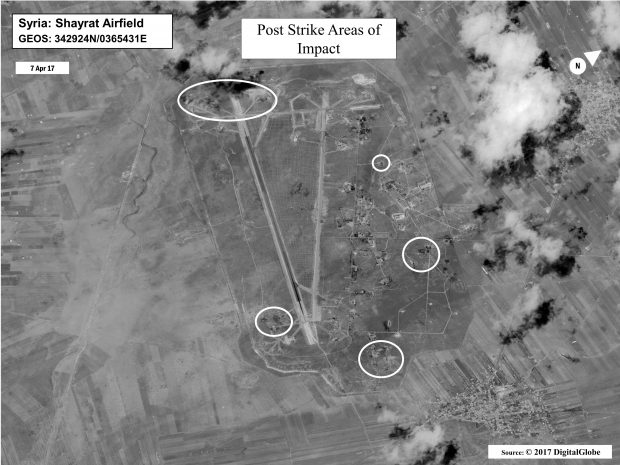 A second view of the craters and destruction at the air base. Source: U.S. Department of Defense

The Tomahawk missiles used in the attack were launched by two Arleigh Burke class destroyers, the USS Ross and USS Porter, located in the eastern Mediterranean. The missiles were timed to strike the airbase within one minute of each other. 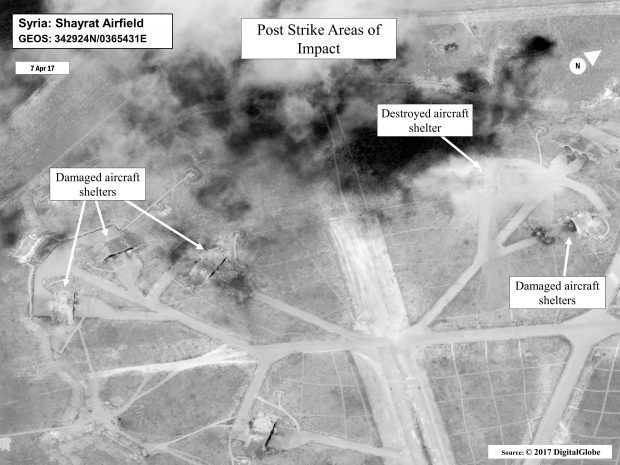 The airstrikes targeted aircraft believed to have been used to drop sarin gas on civilians in Syria’s Idlib province. Source: U.S. Department of Defense

Several videos and pictures taken at the scene of the attack show that the strike appeared to be highly successful in destroying many, if not all, of the aircraft located at the base. The Pentagon’s initial battle damage assessment report found that damage to the base was extensive.

#Syria: photos of the remains of regime warplanes in the Shayrat airbase after they were taken out by the #US pic.twitter.com/tQ2kKMBR1q

“We are assessing the results of the strike.  Initial indications are that this strike has severely damaged or destroyed Syrian aircraft and support infrastructure and equipment at Shayrat Airfield, reducing the Syrian Government’s ability to deliver chemical weapons,” said Navy Capt. Jeff Davis, the Pentagon’s spokesman, in a statement Thursday.