Kids at an elementary school in Pyongyang celebrated a holiday for children with imitations assault rifles and hand grenades, according to Agence France-Presse.

The students of Pyongyang Number Four Elementary school ran obstacle courses with a mock AK-47 slung over their shoulders and threw grenades as part of the activities for Korean Children’s Union Day.

“We have to prepare ourselves to defend our country,”  Myong Hyon Jong said after completing the various tasks, adding that she wants to join the military when she grows up to “safeguard the respected Supreme Leader Kim Jong Un with military power.” 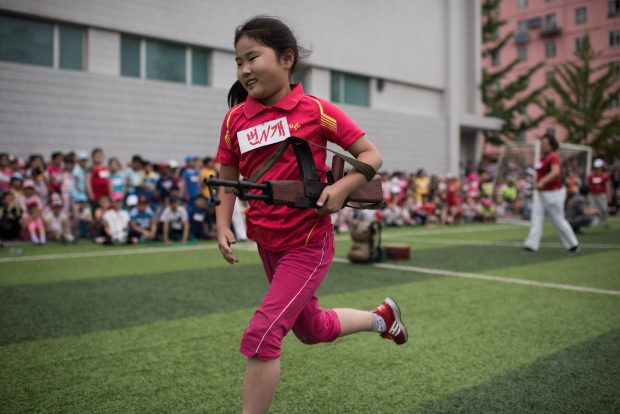 Myong is only 10 years old. 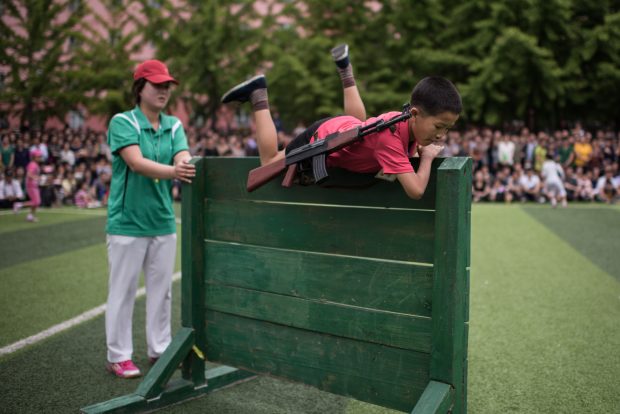 Her teacher Ri Su-Ryon told reporters that the training activities were designed to “give the children the spirit to defend our country when they are grown up, and to prepare them physically and mentally to beat down any enemies while upholding the Songun (military-first) revolutionary leadership of the respected marshal,” a reference to North Korean dictator Kim Jong Un.

Ri actually joined in the mock combat activities. “I threw the hand grenade with the mind that I would beat down all the enemies who even try to infiltrate our country,” she said.

North Korean children are automatically enrolled in the Korean Children’s Union, which helps North Korean leadership brainwash people at an early age. The anniversary of the founding is a public holiday in North Korea and is celebrated with field days involving different activities. 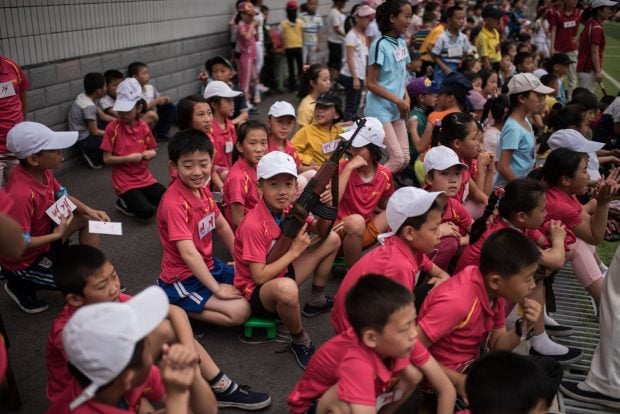 A boy holds a mock rifle as he sits with others to take part in sports games marking ‘Children’s Union Foundation day’, in Pyongyang on June 6, 2017. (ED JONES/AFP/Getty Images)

North Korean state media reports that under Kim Jong Un’s leadership, children “are being brought up to be pillars supporting Juche Korea.” On this, the 71st anniversary of the founding of the Korean Children’s Union, “all the people in the country are recalling with deep emotion the immortal feats performed by peerlessly great men in making the unique history of love for younger generation and future and opening up the bright vista to the homeland,” the Korean Central News Agency said Tuesday.

North Korea maintains a wartime mentality at all times, perpetually perceiving existential threats from the U.S. and its allies. For this reason, the North has been rapidly developing nuclear weapons and ballistic missiles to deliver them to foreign cities and targets.

The military often plays a role in major holidays, as was demonstrated by the massive military parade for the Day of the Sun, the 105th anniversary of the birth of North Korean founder Kim Il Sung.