The Council on American-Islamic Relations says it is a Muslim civil rights group, a claim which seems to be at odds with the organization’s coziness with the increasingly authoritarian Turkish government.

Nihad Awad, CAIR’s executive director, has recently been seen with Serdar Kilic, Turkey’s ambassador to the U.S. and a defender of the Turkish government operatives who brutally beat peaceful protesters in Washington, D.C. last month.

Awad’s apparent coziness with Kilic could explain why his group, known as CAIR, has been silent on the embassy beating, for which 12 members of Turkish president Recep Tayyip Erdogan’s security detail will be charged on Thursday.

Kilic was present at the melee. But rather than call off Erdogan’s goons or offer solace to the victims of the beating — a small group of mostly Kurdish protesters — Kilic chewed out Washington, D.C. Metro police officers for doing their jobs by attempting to break up the brawl.

“You cannot touch us,” he is seen saying in a video recorded during the chaotic event, referring to the diplomatic immunity afforded members of Erdogan’s delegation. 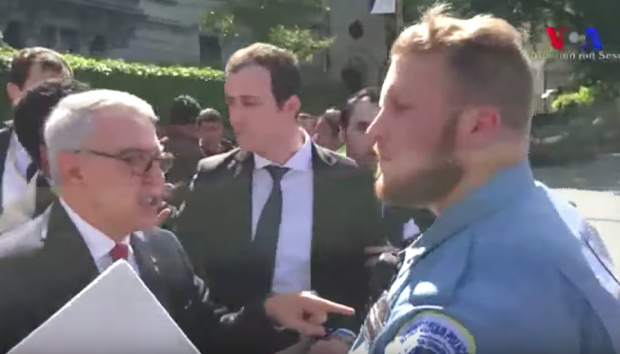 The incident has touched off a diplomatic stalemate between the U.S. and its NATO ally. Two Turkish-American citizens were arrested on Wednesday for kicking female protesters. And Washington, D.C. police are expected to announce charges against a dozen more Erdogan bodyguards.

In addition to avoiding comment on the embassy beating, Awad and CAIR have ignored other examples of Erdogan’s attacks on the civil rights of Turks.

Erdogan has jailed hundreds of journalists and dissenters and forced thousands more out of their jobs. In April, the Islamist leader gained even more executive power after narrowly winning a referendum which has since been disputed by international election observers. The international groups have cited widespread voting irregularities and accused Erdogan and his political party of waging a public intimidation campaign in order to win the referendum.

The few times that Awad has publicly commented on Turkish politics has been to support the regime.

In July, just after a failed coup attempt, Awad led a rally outside of the White House in which he called the coup attempt “an affront, not only to the Turkish people, but to everyone who believes in democracy and the free will of the people.”

Erdogan has used the coup attempt to crackdown on Turkish society. It has been cited as the reason for the mass arrests and for the contested referendum.

In August, Awad posted a photo on Twitter from Turkey in which he offered support for the Turkish republic following a failed coup attempt several weeks earlier.

In support of Turkey’s democracy and economy, I urge people around the world to visit #Turkey.
Please share this hashtag.#VisitTurkeyNow

In September, Awad met with Kilic and the Turkish delegation to discuss the extradition of Fethullah Gulen, a self-exiled cleric living in the U.S. who Erdogan claims masterminded the failed coup attempt.

CAIR, which was named an un-indicted co-conspirator in the Holy Land Foundation terrorism case, has also sided with Turkey in another major international diplomatic dispute. In 2015, the group signed onto a letter taking the side of Turkey in the debate over whether to call the Ottoman empire’s murder of more than 1 million Armenians a genocide. The Turkish government has paid millions to Washington, D.C. lobbyists to prevent passage of bills labeling the events a genocide.

CAIR did not respond to a request for comment for this article.