The Department of Veterans Affairs has terminated another whistle-blower.

“In connection with the proposed removal dated May 22, 2017, a decision has been made to discharge you from federal employment effective August 22, 2017,” a termination letter written by Dr. Michael Adelman, the Veteran Integrated Services Network (VISN) 4 director and the deciding officer on Dr. Klein’s case, stated.

Klein was terminated ostensibly for failure to follow orders, but his attorneys at the Whistleblower Law Firm are crying foul, stating that it was whistle-blower retaliation.

Klein disclosed patient care issues in the pain management department — where he was a doctor — at the hospital in 2015 and in May 2017, the VA Office of Inspector General validated his concerns.

“We substantiated the allegation of poor management of long-term opioid therapy for pain for the 10 patients we reviewed,” the inspector general report stated.

Rather than fixing the issue, the hospital retaliated against Klein: “On May 28, 2016, after Klein’s superiors found out he’d blown the whistle on what he saw as serious problems, the VA closed his clinic and tried to fire him. When the agency learned Klein could not be fired because he was a whistleblower, his superiors forced him to sit in a room for a year, with no patients and no duties, all the while paying him his full salary of $250,000 a year,” a Fox New article from June stated.

Soon after that article came out, the VA medical center did “a 180,” according to Klein’s attorney, Natalie Khawam, and ordered him to see patients again.

Since that new order, Klein has only seen two patients.

The hospital claims it’s because he refuses to do so, but Khawam said it was because the hospital refused to schedule any more patients.

“The PB-VAMC has claimed it ordered Dr. Klein to see patients and that there were patients waiting to be seen by Dr. Klein. However, there is evidence to show the PB-VAMC never intended to assign pain consults to Dr. Klein. In fact, the evidence shows that the PB-VAMC never intended, and has made no attempt, to schedule patients for pain consults at Poplar Bluff since the beginning of this year (2017), even before asking Dr. Klein to take start seeing patients,” Khawam stated in her response to the termination.

Emails provided to The Daily Caller back up this assertion, with Klein repeatedly complaining that patients are not being schedule, and noting the issues he disclosed to the inspector general had not been addressed.

Klein also complained he had not been re-entered properly — a technical medical term for proper training for a doctor following a long layoff like his.

“As ordered, I will see patients, as the VA is aware of my concerns of not having all the appropriate tools for patient care and that I have not been brought up to date on the changes in pain management law, treatment, and patient pain management care. Nor has the PBVAMC made me aware if my credentialing/privileging is current and approved for patient care,” Klein said in an email to a manager at the hospital on June 5, 2017. “However, please be aware that I cannot perform duties or procedures that could endanger Veterans. For patient and doctor safety, I intend to ask for someone to second sign any medical chart I touch and I will make the appropriate disclosures in support of our Veterans for each assignment.”

“I am looking forward to treating Veterans with the highest standard of care that our Veterans deserve, and that I was proudly providing over a year ago. However, since I have been in confinement without access to practice or patients, I have been reasonably requesting for a period of re-acclamation to properly provide pain procedures and review any changes in Pain Management guidelines,” Klein said in another email on June 6.

In an email on Aug. 18, just days before his termination, Klein was still insisting that roadblocks had been formed to stop him from seeing patients: “I am actively trying to get back to patient care, but I have not been given any patient files to review or patient consults scheduled. Furthermore, the nurse assigned to the Pain Management Clinic has clearly acknowledged that he does not know standard operating procedures for a Pain Management Clinic. I have offered numerous times to provide him that training but he has refused multiple times.”

Angela Smith, the public affairs officer for the Poplar Bluff medical center, did not respond to an email for comment.

Klein’s termination is also curious because of the presence of Dr. Adelman, who is the regional director of VISN 4.

That’s a region of VA hospitals in Pennsylvania and Ohio. It does not include the Poplar Bluff medical center, which is in VISN 15.

Khawam said no one at the VA has ever explained to her why Adelman, from another region, was chosen to decide her client’s fate.

An email to Adelman asking why he made this decision was left unreturned.

The termination of Klein appears to be the latest example of whistle-blower retaliation, which continues at the VA despite legislation passed in June which President Donald Trump said would add protections for whistle-blowers against retaliation. 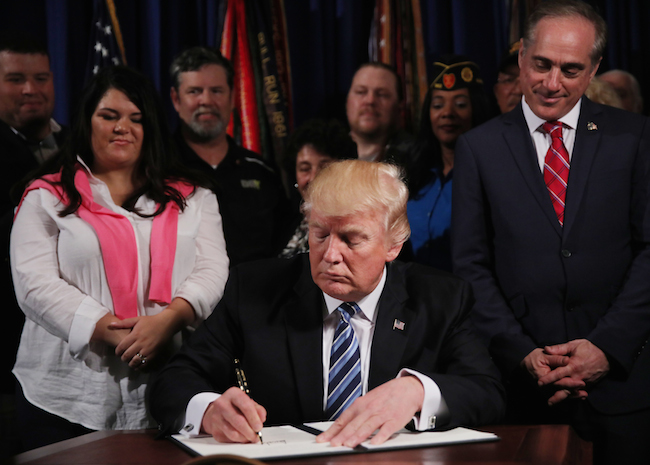 Sean Higgins, a well-known whistle-blower at the Memphis VA Medical Center, was informed he’d be terminated on the day the legislation was signed.

That hospital had already terminated Higgins twice before — since he began his employment in 2007 — only to have the appeals process determine those terminations were meritless.

Earlier this month, the Washington Examiner ran an article about a Montana VA whistle-blower who confronted VA Secretary David Shulkin about whistle-blower retaliation at a townhall: “Shulkin met with VA officials in Montana to tour the Fort Harrison facility, and later participated in a question-and-answer session. That’s where Greg Chiles, a veteran and VA police officer, asked Shulkin why retaliation against him is not being stopped.”

Shea Wilkes is an employee and whistle-blower at the Shreveport VA Medical Center who sent a letter to the White House informing the president that 2,000 veterans are waiting for appointments in August.

“Retaliation is still rampant in the VA and causes many good employees to remain silent,” Wilkes said in his letter.