Former “Duck Dynasty” star Phil Robertson promised that he will “reject political correctness” on his upcoming show “In the Woods with Phil,” that will air on Conservative Review TV.

“What does a man do when they try to run him out of town for quoting a Bible verse? I’ll tell you what he does; he goes deep in the woods and he starts a fire,” the 71-year-old reality television star shares in a new promo released Thursday for his upcoming show. (RELATED: ‘Duck Dynasty’ Star Weighs In On Bathroom Bill With Proposal) 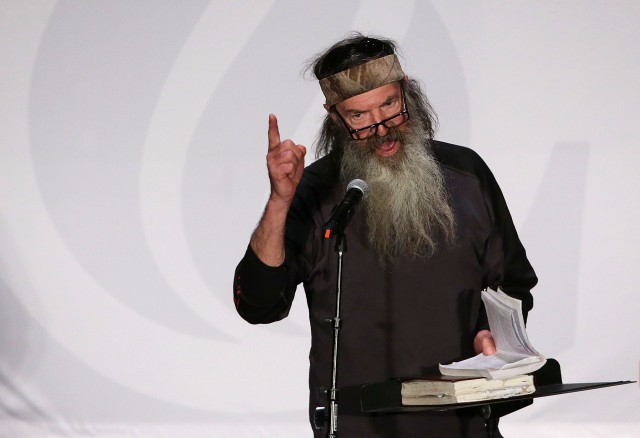 “For far too long we have been told to shut up. No more,” he added. “Here’s the deal, America. These are my woods. Out here, I call the shots. Out here, we reject political correctness, or as I like to say, ‘pontificated crap’ in favor of some good old fashion biblical correctness.”

“So if you are tired of being told what to think, what to say,” he continued. “If you want to hear someone mean what they say and say what they mean, If you want a healthy dose of truth.”

“Most media are ashamed of America, its values, and just has an aversion to plain old common sense,” Robertson explained about his show, according to The Hollywood Reporter. “What did I hear today? That a girl can now be a Boy Scout? The name is ‘Boy Scout.’ How hard is that to understand? If liberals and Hollywood elites are going to pressure a network and advertisers to abandon me for saying something that is common sense as ‘you need to be a boy to be a Boy Scout,’ then I am going to go where they can’t silence me. I have never been one to shut up.”

As the reality star mentioned, Robertson was suspended from his show after he compared homosexuality to bestiality during an interview with GQ magazine in 2013