In this #MeToo moment, the battle over the Christmas song “Baby It’s Cold Outside” rages on. Outlets from all points along the media spectrum — from progressive to full communist — have attacked the song for its rapey, predatory subtext.

But, worse than merely celebrating toxic masculinity and rape culture, “Baby It’s Cold Outside” also convinced al-Qaida’s spiritual founder that America itself is the enemy.

Sayyid Qutb, a twentieth-century Egyptian Islamic theorist, advocated Islamic theocracy and condemned secularism. His acolytes included Osama Bin Laden and Ayman Zawahiri: the top two terrorists at Al Qaeda. Sayyid Qutb spent two years in the United States, including at a teachers’ college in Washington D.C., at Colorado State College of Education (now the University of Northern Colorado) and possibly even a stint at Stanford University.

American college campuses failed to turn Sayyid Qutb into a freedom-loving patriot during his time as a student and a traveler. In any case, Mr. Qutb was inspired to write “The America That I Have Seen,” in which he condemned our country for its materialistic, violent, racist and sexualized culture.

In “The Looming Tower: Al-Qaeda And The Road To 9/11,” Lawrence Wright recounts Qutb’s experiences at Colorado State College of Education. There, Qutb had noticed a problematic pop song decades before pop culture privilege-checking was cool:

Many of the international students, including Muslims like Qutb, would visit one of the more than fifty churches in Greeley on Sunday evening, where, after services, there were potluck dinners and sometimes a dance. “The dancing hall was decorated with yellow, red and blue lights,” Qutb recalled on one occasion. “The room convulsed with the feverish music from the gramophone. Dancing naked legs filled the hall, arms draped around the waists, chests met chests, lips met lips, and the atmosphere was full of love.” The minister gazed upon this sight approvingly, and even dimmed the lights to enhance the romantic atmosphere. Then he put on a song titled “Baby, It’s Cold Outside,” a sly ballad from an Esther Williams movie that summer, Neptune’s Daughter. “The minister paused to watch his young charges swaying to the rhythms of this seductive song, then he left them to enjoy this pleasant, innocent night,” Qutb concluded sarcastically. In December a new tone entered his letters to his friends. He began talking about his “estrangement,” in both soul and body. By then he had withdrawn from all his classes.

Sayyid Qutb went on to inspire generations of radical Islamist terrorists with his writings. 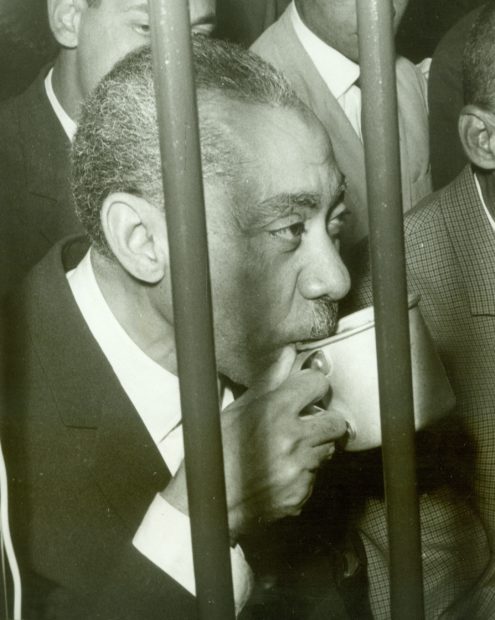 Sayyid Qutb under arrest in Cairo in 1966. AFP/Getty Images

So if you’re a social justice warrior calling out “Baby It’s Cold Outside” from the vanguard of this year’s version of the perpetual War On Christmas, you’re not alone in your jihad.

Al-Qaida — a group of social justice warriors from the Middle East — is with you.

Lew Jan Olowski is a married father of two and an attorney in Maryland.