Days after one of the deadliest school shootings ever, a Columbine shooting survivor is calling for more lenient concealed carry laws in schools.

Patrick Neville was a former Columbine High School student and is now Colorado House Minority Leader. He has pushed legislation that would ease regulations on concealed carry laws in school zones in Colorado, The Washington Times reports.

“As a former Columbine student who was a sophomore during the shootings on April 20, 1999, I will do everything in my power to prevent Colorado families from enduring the hardships my classmates and I faced that day,” he shared. “Time and time again we point to the one common theme with mass shootings, they occur in gun-free zones.” 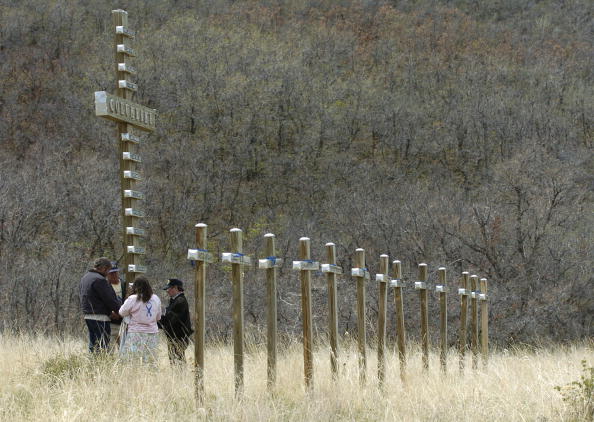 Jim Brinks (R-L), Steve Schweltzberger, Ron Aigner, and a woman known only as Golden Eagle stand and pray around the large cross among thirteen small crosses April 20, 2004, that serve as a memorial to the twelve students and one teacher killed in the Columbine High School shootings in Littleton, Colorado on April 20, 1999. (Photo by Larry W. Smith/Getty Images)

Under the current law, concealed carry holders are permitted to bring firearms on school grounds, but the gun must remain within the confines of a vehicle.

Since being elected in 2014, Nevel has annually pushed a bill that would ease this rule, noting the current legislation “creates a so-called gun free zone in every K-12 public school.”

“This act would allow every law-abiding citizen who holds a concealed carry permit, issued from their chief law-enforcement officer, the right to carry concealed in order to defend themselves and most importantly our children from the worst-case scenarios,” Nevel stated.

He contends the fatality level would not have been as high in the Columbine massacre had faculty members been armed.

The hearing for the bill in the Democratic-controlled Colorado House of Representatives is scheduled to take place on Tuesday.