CNN added their own spin to the White House Correspondents’ Dinner by repeatedly labeling it an “event honoring the First Amendment.”

In various chyrons on Saturday night, CNN asserted that President Trump “skipped” or “snubbed” an “event honoring the First Amendment,” which made Trump’s absence seem much more sinister. President Trump instead held a rally in Washington Twp., Mich. (RELATED: ‘We Will Impeach The President!’ — Trump Does His Best Maxine Waters Impression And The Crowd LOVES It) 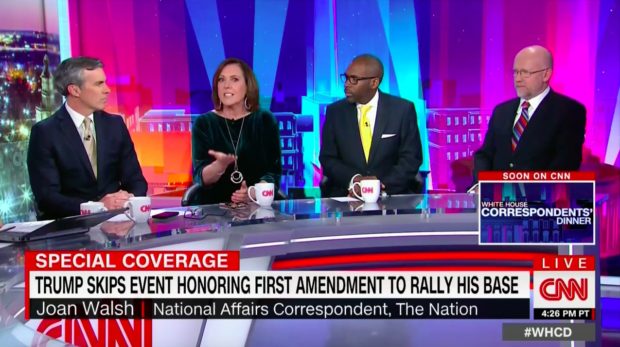 Conservative media members and other politicos mocked CNN for claiming the WHCD is about the First Amendment.

“Event Honoring the First Amendment” JFC CNN this is beyond a parody https://t.co/gmNIyFO6al

Conservatives: this is why people hate the media

Most reporters: this is why people hate us

Acosta: what about me? @dmataconis: what media bias?

.@CNN chyron “Trump Snubs Journalist Event Celebrating First Amendment” tells you all you need to know about how biased and sick of @CNN Trump supporters and even skeptics are #WHCD #TTT