Raiders Bruce Irvin said that finally getting his college degree was like winning the Super Bowl during his time with the Seattle Seahawks, calling it a “great moment.”

“The odds were stacked up against me to get my bachelor’s degree. It was a surreal moment,” the 30-year-old linebacker told the Associated Press Wednesday. 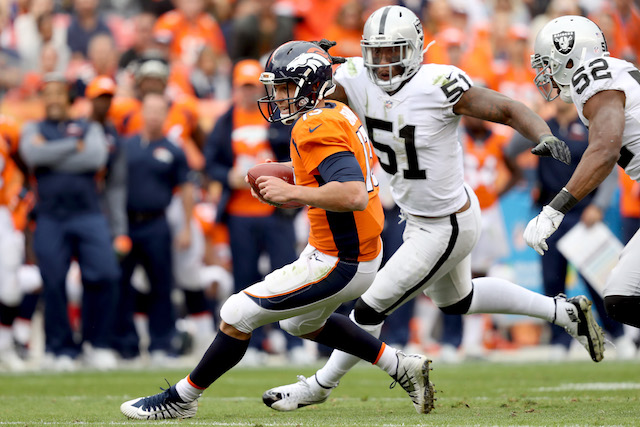 Trevor Siemian #13 of the Denver Broncos is chased out of the pocket by Bruce Irvin #51 of the Oakland Raiders at Sports Authority Field at Mile High on October 1, 2017 in Denver, Colorado. (Photo by Matthew Stockman/Getty Images)

“I kind of put it up there with the Super Bowl, neck and neck. Super Bowl probably would have been better if we’d won two in a row,” he added. “It was a great moment, not only for me but for my son and my family. I’m glad I got to experience it.”

Irvin, who was a former high school drop out who spent time in jail when he was growing up in Atlanta, explained that getting his bachelor’s degree was not just for him but his 5-year-old son.

Irvin was one of a handful of players in the NFL this offseason able to get his college degree through a program as part of the collective bargaining agreement that gives tuition reimbursement to those players who want to further their education.