If Twitter is worth losing a media gig, then go right ahead and keep tweeting.

If you’re a hothead, you might heed a lesson from Cheri Jacobus, a columnist and professional President Trump hater, who tweeted something about a GOP strategist’s daughters being ugly and getting raped. Her employer — USA Today — showed her the door.

A USA Today spokesperson told TheWrap, “Our editors let Jacobus know that she would no longer be writing for USA Today.”

Jacobus continued to write for The Hill until earlier this year.

Here are the tweets that caught the attention of USA Today.

The tweet that helped clinch her firing came from Caputo who tweeted USA Today‘s opinion section directly and asked, “I’m sure it’s totally normal for one of your columnists to Tweet suggesting the rape of toddler girls. Right?”

A little juicy backgrounder…her reference to Epstein is Jeffrey Epstein, who has partied with Trump and flown former President Bill Clinton on his private plate a reportedly 53 times, is a registered sex offender. Back in 2008, Epstein went to prison for soliciting sex from an underage girl for prostitution. He spent 13 months behind bars, getting five months skimmed off his sentence.

Caputo is pointedly trying to get The Hill to also can Jacobus. His efforts are apparently working.

The Mirror reached out to The Hill’s editor and PR firm to inquire on the status of her column.

“She was a contributor until February and no longer is,” publicist Lisa Dallos wrote The Mirror by email. “The Hill has no plans to publish her in the future.”

Jacobus is a well-known face in Washington media circles. She has been a political columnist for The Hill since 2009. She’s appeared on most all of the cables — FNC, CNN, MSNBC and CBS.com. She has been an adjunct prof at Washington University’s graduate school of political management. Her own public affairs and communications firm is Capitol Strategies, which she founded in 1998.

She’s a registered Republican and a former RNC spokeswoman.

Her vitriol hasn’t been focused only on Caputo. She recently referred to a Daily Caller editor as a “Nazi.” 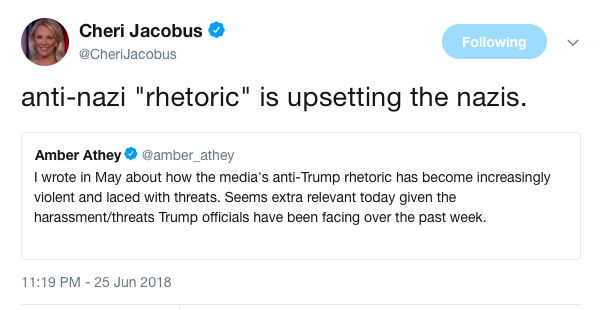 Michael Caputo, the GOP strategist and media consultant with whom she’d been sparring, had been getting under Jacobus’ skin for days, calling her bitter, childless and alone. He invented a special nasty hashtag for her that reads: #BitterChildlessAlone. This now reads: “#BitterChildlessAloneFired.”

“She’s bitter the Trump campaign rejected her … she’s slowly turning into a cat lady drinking a box of wine by herself every night, tweeting angrily at the world until it’s all gone,” Caputo told Big League Politics.

“I’m taking a social media break for a few days, hitting the beach with my girls. Thank you, all,” he wrote.

UPDATE: Jacobus pointed out to The Mirror that she was responding to Caputo’s mean tweets. “You may want to take a look at the 100 or so #BitterAloneChildless memes from Caputo and understand that I was responding to those with my tweets — particularly when he suggested I commit suicide by jumping off a roof top.”