A Democratic PAC plans to spend $3 million in a last-minute effort to help save New Jersey Sen. Bob Menendez in a tight race in the deep blue state just weeks before the Nov. 6 midterm elections.

The news comes as Menendez and his Republican opponent Bob Hugin’s race is tighter than expected, as Menendez was ahead in the polls by just over 7 points as of Tuesday, according to Real Clear Politics. The Senate Majority PAC is set to spend the $3 million dollars on a T.V. advertisement attacking Hugin for allegedly spending his own money on his campaign. The advertisement will reportedly be aired state-wide and will mention the amount of money he earned while working for a pharmaceutical company.

“Bob Hugin is a Trump sycophant who is funding his campaign off the millions he made raising prices on cancer drugs as a pharma CEO,” Chris Hayden, a Senate Majority PAC spokesman, said to The Hill.

The donation also comes one day after Menendez was called out as a “hypocrite” in an ad released by his Republican opponent Bob Hugin for believing Justice Brett Kavanaugh’s sexual assault accuser even though Menendez faced allegations of sexual relations with minors.

“Chuck Schumer and Nancy Pelosi desperately spending another $3 million to try and bail out corrupt, career politician Bob Menendez confirms they are absolutely petrified that New Jersey voters know Menendez doesn’t deserve to be reelected. That’s why they’re making a last ditch effort to try and save Menendez’s disgraceful political career,” Nick Iacovella, the press secretary for Hugin, said in a statement to The Daily Caller News Foundation. “After Obama’s Justice Department indicted him for bribery and corruption, Democrats and Republicans on the bipartisan Senate Ethics Committee publicly vilified him for violating federal law and abusing the power of his office. We’re confident that voters know Marine veteran and job creator Bob Hugin is the clear choice to represent New Jersey in the U.S. Senate.”

Menendez was one of the first senators to publicly show support for Christine Blasey Ford, the woman who accused Kavanaugh of high school-era sexual assault. After an FBI investigation could not find corroborating evidence of the claims, Menendez said “if that’s an investigation, it’s a bullsh*t investigation.” 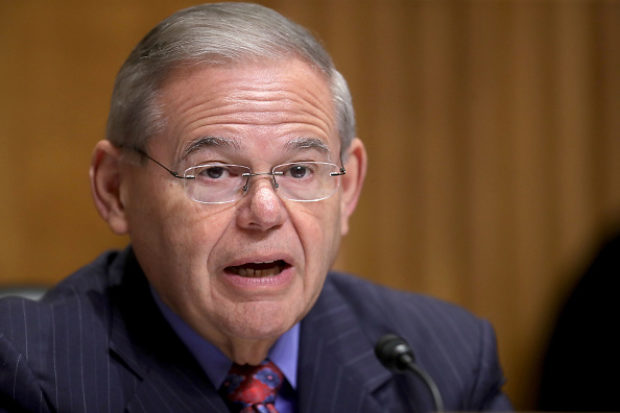 In the ad released Monday, Hugin calls out Menendez for his hypocrisy in relation to the two issues, asking Menendez about his own previous allegations of engaging in sex with minors. (RELATED: Hugin Calls Out Menendez As ‘Hypocrite’ For Believing Ford But Not His Own Underage Accusers)

Menendez’s case went to a mistrial for a second time in November 2017 after the jury was deadlocked on the 18 counts in the indictment and he was not convicted.