House Majority Leader Kevin McCarthy suggested that his office being vandalized over the weekend was the natural result of the Democrats’ rhetoric during an appearance on “Mornings With Maria” on Tuesday.

Two young men were caught on surveillance camera outside of the office, which had its window smashed in by a large boulder. McCarthy posted photos of the incident on his Instagram asking for help identifying the perpetrators. (RELATED: Vandals Throw Giant Boulder Through Rep. McCarthy’s Office Window)

“This was Saturday night, at 9:54 pm, and [an] individual threw a great big boulder through, entered the office, and another person entered as well, and they stole equipment. I don’t know if this is politically driven, might be driven more just from the idea of stealing in the office,” McCarthy told host Maria Bartiromo.

“Yeah, we have security around the office, we put cameras throughout, and you could see them literally breaking in, walking in and stealing, so I posted it on Instagram for the community, does anybody know two individuals? Tell us who they are, they broke in, they stole office equipment. And we want to make sure we’re a little safer,” he continued. 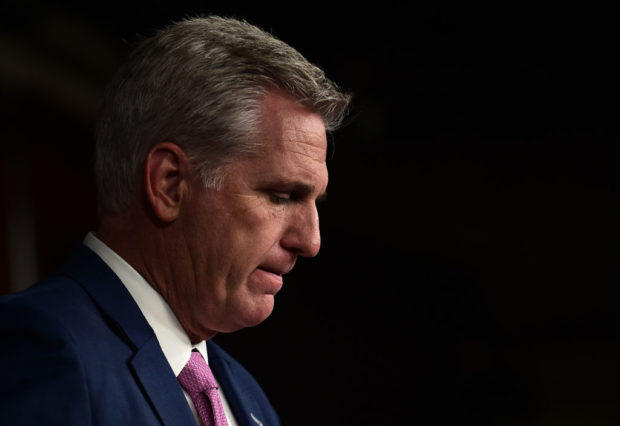 “Well, you have watched this with Maxine Waters and others intensifying where you saw  … Mitch McConnell recently at a restaurant, or Ted Cruz at a restaurant encouraging people for this behavior that is not acceptable. One thing about America, we believe in civil discourse. You could agree with — disagree with someone and not be disagreeable but now it’s in your face and encouraged from the Democratic side,” McCarthy added.