Texas Democratic Senate candidate Beto O’Rourke’s campaign would not share his views about the migrant caravan filled with thousands of people from Central America traveling through Mexico toward the U.S., when asked by The Daily Caller News Foundation.

“Beto does not yet have a statement about the migrant caravan. Stay tuned,” an email from the campaign stated. “In general, Beto believes that immigrants help our state and country grow strong, safe, and prosperous and wants to ensure that immigrants have a lawful, earned path to citizenship.”

O’Rourke told CBS News on Monday that he believes the U.S. needs to do “everything” to address the conditions where the migrants are coming from, saying people need to work with the other countries to figure out asylum laws.

“I think we need to do everything we can to address the underlying conditions in the countries from which those caravans come,” O’Rourke said. “Honduras in this case, but Guatemala and El Salvador, work with the country of Mexico to see if we can provide for those one the caravan there in that country. But if we try to decide this at our border, it’s almost too late at that point. So, let’s work with our, with our partners in these other countries, let’s make sure that we honor our own asylum laws.”

President Donald Trump and Republicans have strongly pushed back on the caravan, mentioning it at campaign rallies, on social media and TV appearances. Trump made it clear Monday night that he did not want to allow these migrants into the U.S., and even said he would deploy troops to defend U.S. borders, if necessary. 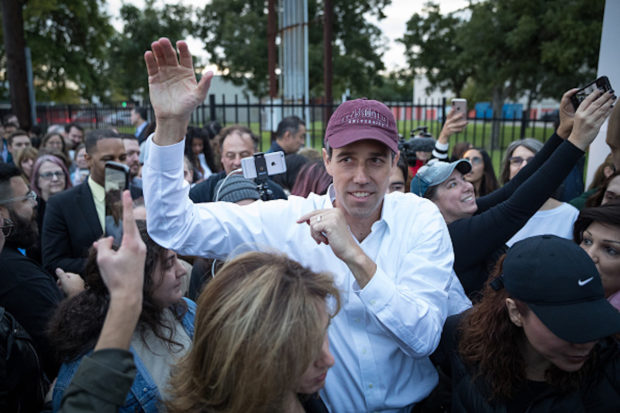 “We’re going to do whatever we have to, they’re not coming in,” Trump said to reporters Tuesday. (RELATED: New Images Show Exactly How Massive The Migrant Caravan Is Traveling to The USA Through Mexico)

“We are worried about this caravan coming. But I am more worried what happens on Nov. 6,” McCarthy said. “If we are not on successful on Nov. 6, think what it would mean if Nancy Pelosi was speaker … think about how many people would be coming.”

O’Rourke is trailing Texas GOP Sen. Ted Cruz in the Real Clear Politics average by 7 points as of Wednesday.