Fox News’ Tucker Carlson demanded an immigration activist answer questions about a claim he made on the air during Carlson’s show Friday night.

The activist, Roberto Hernandez, claimed that the United States essentially had an obligation to let the caravan come into the country because the U.S.’s policies stymied Latin American countries’ development.

“You’ve demonstrated an ignorance of history sufficient that I don’t want you trying to educate us and then I just want you to answer my question about right now,” Carlson stated. “What is the justification, the legal justification for these people coming to our border and not the U.S. Embassy in Tegucigalpa, [Mexico]?”

“Well if you look at the role of the United States in Central America, in Nicaragua, in Honduras, in Guatemala, in other countries in Latin America, the United States has promoted wars to protect corporate interests in a lot of these countries,” Hernandez followed up.

Carlson cut off his guest.

Honduran migrants take part in a caravan heading to the US, on the road linking Ciudad Hidalgo and Tapachula, Chiapas state, Mexico, on October 21, 2018. (Photo by Pedro Pardo / AFP) (Photo credit should read PEDRO PARDO/AFP/Getty Images)

“I’m trying to take you seriously. You said most of them in the first caravan are coming from Honduras. What war are you specifically talking about that the United States promoted whose interests were benefiting from that war and when did that war end? What are you talking about specifically?” Carlson asked.

“Specifically, look at the role of the U.S. government in Honduras. I mean we can go here all day, all night but we don’t have that much time,” Hernandez responded. (RELATED: Tucker Asked Jorge Ramos How Many Caravan Migrants He Planned To Take In – Things Got Awkward Fast) 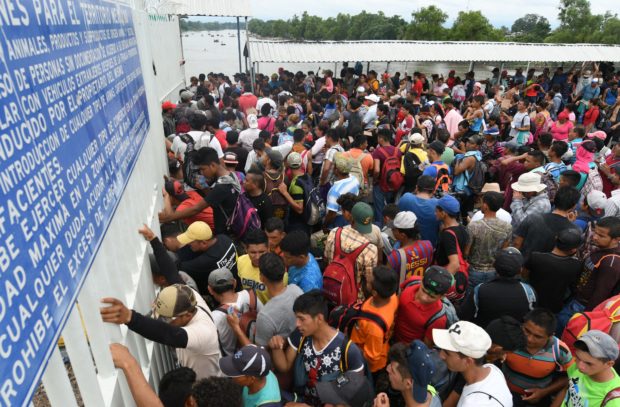 Honduran migrants taking part in a caravan to the US wait to cross to Mexico, in Ciudad Tecun Uman, Guatemala, on October 20, 2018. ( ORLANDO SIERRA/AFP/Getty Images)

“What war are you talking about? Just give me the war, tell me when it ended,” Carlson fired back. “What you’re saying is you don’t really know what you’re talking about, but you’re throwing out a talking point.”