More than 1,600 scientists have endorsed an open letter that rejects President Donald Trump’s proposal to judge gender solely on biology. In the letter, first reported Thursday by Buzzfeed, the scientists declare a genetic determination of sex to be “fundamentally inconsistent” with science.

The letter is a response, organized by not-binary.org, to a 2017 Department of Health and Human Services memo that advocates a government-wide definition of gender that is based “on a biological basis that is clear, grounded in science, objective and administrable,” the New York Times recently reported.

The Daily Caller reached out to not-binary.org for further comment but has not yet received a response. 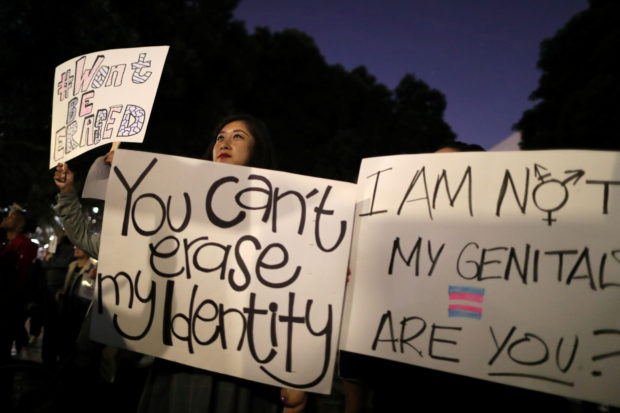 “This proposal is fundamentally inconsistent not only with science, but also with ethical practices, human rights, and basic dignity,” reads the letter. (RELATED: Transgender Pride Flag Flies At World Series Game 5)

The letter alleges that the Trump administration’s “proposal is in no way ‘grounded in science’ as the administration claims. The relationship between sex chromosomes, genitalia, and gender identity is complex, and not fully understood.”

The scientists contend, “There are no genetic tests that can unambiguously determine gender, or even sex.” But the letter then insists that even if “such tests existed, it would be unconscionable to use the pretext of science to enact policies that overrule the lived experience of people’s own gender identities,” seemingly suggesting that personal feelings supersede established facts.

Social science seems to be at the root of the letter’s argument, indicating that recognition of transgender rights and identity is the right thing to do.

“Our best available evidence shows that affirmation of gender identity is paramount to the survival, health, and livelihood of transgender and intersex people,” the letter states. (RELATED: Transgender Inmate Slapped With Prison Sentence For Rape And Assault)

Transgender athletes continue to be source of major contention with transgender men achieving top spots in female sports competitions, like the recent women’s world cycling championship. Some parents oppose the decision by the Obama-era department of education to allow transgender students to use either male or female bathrooms, and the sexual assault of a five-year-old in a Georgia elementary school is contributing to the government reconsidering that policy.

Transgender rights also appear to be confusing situations for certain prisons. Both the U.K. and Canada are putting transgendered males in women’s penitentiaries and sometimes the result has been catastrophic. In Britain this month, a judge sentenced imprisoned transgendered man Karen White to almost a decade for raping, assaulting and wounding women inmates. In his verdict, Judge Christopher Batty said: “You are a predator and highly manipulative and in my view you are a danger.”

The Trudeau government in Canada approved a bill in 2017 that was dubbed the “bathroom bill” by its critics because it recognized “gender expression” as law and allows a transgendered man to use a woman’s change room or bathroom. It has also included the transgendered as an identifiable group under Canada’s hate crimes laws.