President Donald Trump criticized both the media and President Barack Obama during his rally in West Virginia on Friday afternoon.

“I heard President Obama speak today. He had a very small crowd, I have to be honest. They don’t tell you that. You know they don’t tell you that,” Trump stated. “We had in Houston, we had the biggest thing you’ve ever seen and they were saying ‘Donald Trump spoke today in front of a few thousand people — a few thousand. We had over a hundred thousand people that wanted to come. We had 22,000 people in the arena.”

The rally he was referencing was the one he held in Houston, Texas on behalf of Senator Ted Cruz, among other Texas Republican candidates. 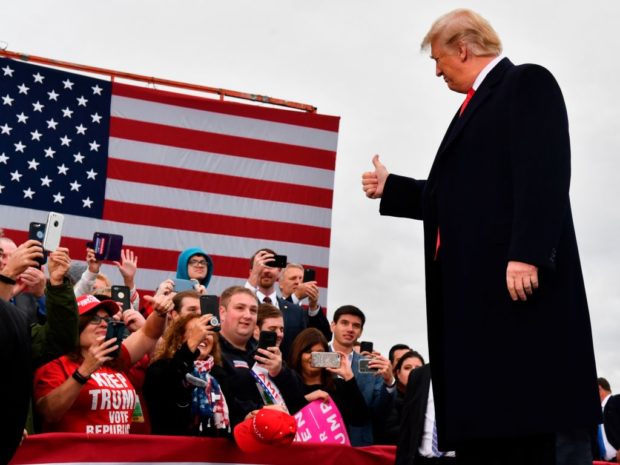 US President Donald Trump arrives to speak at a campaign rally at the Huntington Tri-State Airport, on November 2, 2018, in Huntington, West Virginia. (NICHOLAS KAMM/AFP/Getty Images)

It was originally scheduled for the NRG Arena, but the location was then changed to the Toyota Center to make room for the large response. The arena has a capacity of over 18,000. Texas Lieutenant Governor Dan Patrick said there were 16,000 people at the Trump-Cruz rally that night. (RELATED: Trump Moves Rally For Ted Cruz To Bigger Venue After ‘Huge’ Response For Tickets)

The Trump campaign revamped the rally from simply an evening event to an all-day tailgate after approximately 100,000 people RSVP’ed to the event.

Obama also held a rally on Friday, which Trump referenced, but his was in Florida on behalf of Democratic candidates Bill Nelson and Andrew Gillum. Their rally was in the Hertz Arena which has a capacity of approximately 8,000, according to their website.

“But I heard President Obama speak today. I had to listen I was in the plane and I had nothing else to do. And I heard him talk about telling the truth. He was talking about, ‘You have to tell the truth’ and yet 28 times he said you can keep your doctor, if you like your doctor. You can keep your plan, if you like your plan. They’re all lies, over and over again you heard that,” Trump added.

Trump’s rally was on behalf of Republican challenger Patrick Morrisey.