Meghan McCain fired back Wednesday when “The View” co-host Sunny Hostin implied that “country over party” meant voting for Democrats.

“I’m a Republican. I’m going to end up voting for the Republicans,” McCain said.

McCain began by explaining that some Democrats appear to believe that when Republicans oppose President Donald Trump’s rhetoric, they will abandon their principles in order to oppose him at the ballot box — and she argued that wasn’t the case.

The serious lesson for Democrats also is that Republicans are not going to vote against their own agenda and against their own interests, meaning I think there’s an impression sometimes if you don’t watch Fox News that all Republicans, if you’re against Trump or you have issues with his rhetoric that automatically I have somehow morphed into a liberal, that every ideology and principle I have ever agreed on, the principles that make me who I am, the conservative that I am, have flown out the window. All of a sudden I’m a Democrat. That is not the case. 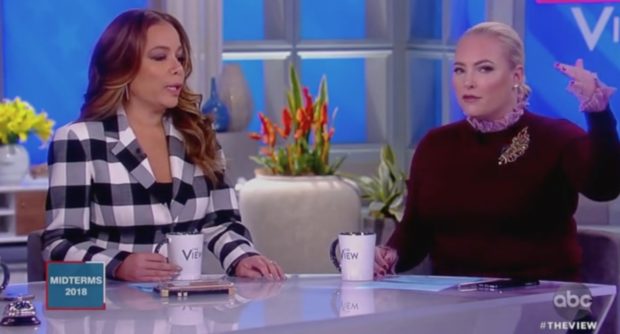 Hostin responded, suggesting that a vote for conservative principles was effectively a refusal to put country over party. “It was disappointing to me … I agree that character was on the ballot and I understand that people want to vote with their party,” she said. “But I think at some point you have to put country before party and there’s been so much divisiveness in this country.” (RELATED: Joy Behar: Female Trump Voters Don’t Know The Difference Between A Predator And A Protector)

McCain tried to explain through an example, saying, “For me, if I vote for Josh Hawley, who won against Claire McCaskill last night — a great conservative, great candidate, young guy and also a veteran by the way — if I vote for him instead of Claire Mccaskill, I’m putting my country behind my party … because Trump isn’t the entire Republican Party. We’re still here. The conservatives are still here and the Republicans.”