North Korea continues to develop ballistic missiles at a previously unconfirmed network of secret bases, according to an analysis of commercial satellite photos released Monday, calling into question the Trump administration’s positive assessment of its nuclear diplomacy with Pyongyang.

The true number of bases has long been the subject of speculation by open-source analysts and intelligence agencies. But the report from the Beyond Parallel project at the Center for Strategic and International Studies reveals new details about 13 of an estimated 20 missile operating bases undeclared by Pyongyang.

The newly confirmed sites are part of the Korean People’s Army’s extensive network of missile operating bases, which are concentrated in three “belts” across North Korea. While each belt is oriented toward a different type of weapon, the bases are capable of housing the full range of ballistic missiles in Pyongyang’s arsenal, from short-range ballistic missiles (SRBM) up to and including intercontinental ballistic missiles (ICBM), according to the Beyond Parallel analysis.

“The dispersed deployment of these bases and distinctive tactics employed by ballistic missile units are combined with decades of extensive camouflage, concealment and deception practices to maximize the survival of its missile units from preemptive strikes and during wartime operations,” the report stated.

The Beyond Parallel report comes as Washington and Pyongyang have reached an impasse in nuclear talks spurred by the summit between President Donald Trump and North Korean leader Kim Jong Un in May. Since then, high-level talks have failed to produce any movement toward increasing transparency into North Korea’s nuclear weapons program, largely due to major differences over how to initiate the denuclearization process.

Trump has painted a rosy picture of progress in the negotiations, citing his warm personal relationship with Kim and certain conciliatory moves by Pyongyang such as the return of imprisoned Americans and a pause in missile flight tests.

“The sanctions are on. The missiles have stopped. The rockets have stopped,” Trump said at a news conference on Wednesday, referring to the missile tests, which have not occurred in almost a year. 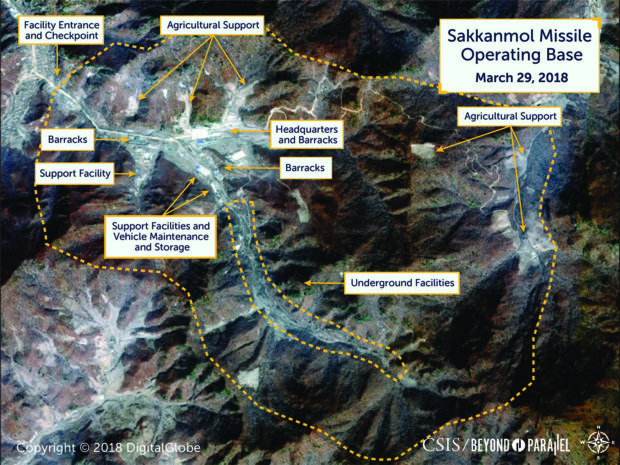 But the Beyond Parallel analysis appears to contradict Trump’s claims that nuclear diplomacy has already reduced Pyongyang’s nuclear threat to the U.S. Instead, North Korea continues to produce nuclear fuel at secret sites and its missile program remains as robust as ever, according to Victor Cha, one of the report’s authors.

“It’s not like these bases have been frozen,” Cha told the New York Times in an interview. “Work is continuing. What everybody is worried about is that Trump is going to accept a bad deal — they give us a single test site and dismantle a few other things, and in return they get a peace agreement.”

Some nuclear weapons experts noted that the Beyond Parallel report simply confirms that Pyongyang is bolstering its long-range weapons capabilities, something it never actually agreed to stop doing after the Trump-Kim summit. Ongoing nuclear talks have not changed Pyongyang’s day-to-day approach to its nuclear and ballistic missile development, according to Vipin Narang, a professor at the Massachusetts Institute of Technology who focuses on nuclear proliferation.

“It is NOT deception. Kim literally ordered ballistic missiles to be mass produced on New Year’s day 2018,” Narang wrote Monday on Twitter. “He never offered to stop producing them, let alone give them up. Ever. He is doing exactly what he said he was going to do.”