Will Racke Immigration and Foreign Policy Reporter
November 19, 2018 10:43 AM ET
Font Size:
Hundreds of angry residents took to the streets of downtown Tijuana on Sunday to protest the caravan of Central American migrants that has been streaming into the city in recent weeks.

Carrying Mexican flags and singing the national anthem, the demonstrators marched to a sports complex where about 2,000 of the migrants are being housed. There, held back by a wall of riot police, they denounced the mostly Honduran migrants as “criminals” and “freeloaders” who were openly flouting Mexican law.

“This is an invasion!” shouted local carpenter Luis Alexis Mendoza, according to the Los Angeles Times. “We demand respect. We demand that our laws be followed.”

Sunday’s anti-caravan march reflected simmering tensions in Tijuana, a sprawling border city of about 1.6 million, over the arrival of the latest Central American caravan. While the city has long been a waypoint for migrants of all stripes heading to the U.S., it has not had to deal with the presence of thousands of homeless Central Americans who are waiting indefinitely to apply for asylum at the ports of entry.

Some Tijuana officials, concerned about the city’s ability to accommodate thousands of newcomers, have called on the Mexican federal government to stop or divert migrants who are en route to the city. (RELATED: Tijuana Mayor Denounces ‘Horde’ Of Caravan Migrants, Calls For Swift Deportation)

“Tijuana is a city of immigrants, but we don’t want them in this way,” Tijuana Mayor Juan Manuel Gastelum said in an interview with Milenio Television on Thursday. “It was different with the Haitians, they carried papers, they were in order. It wasn’t a horde, pardon the expression.”

The mayor’s comments reflected anger among many Tijuana residents at the increasing number of caravan migrants camped in shelters and public spaces in the city. At least 3,000 were there as of Sunday, and thousands more are expected to arrive over the coming weeks. 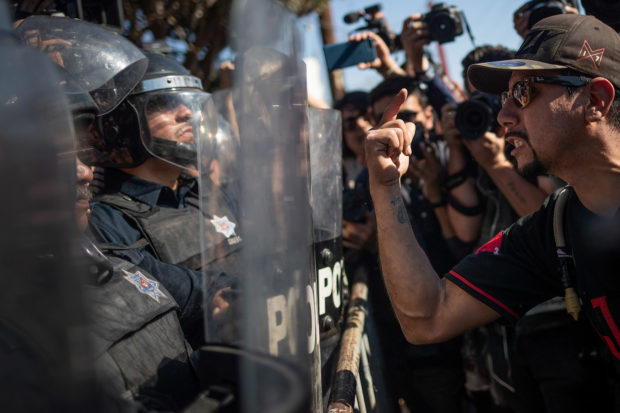 A demonstrator, part of a protest march against migrants, shouts towards a line of police in riot gear who were standing guard over a temporary shelter housing a caravan from Central America trying to reach the U.S., in Tijuana, Mexico November 18, 2018. REUTERS/Adrees Latif

Wait times to apply for asylum at U.S. ports of entry near Tijuana are expected to skyrocket in part because of tougher border security measures the Trump administration has implemented in recent weeks. Under a new executive order, anyone caught crossing the border illegally is ineligible for asylum protections, meaning asylum seekers have to line up at ports of entry to have their claims heard.

The policy, which is aimed at channeling asylum seekers to the ports of entry, comes as thousands more Central American migrants have assembled in caravans headed for the southwest border.

There are as many as 10,000 migrants crossing the country in several caravans, according to the Mexican interior ministry. Most of those migrants are expected to end up in Tijuana in the coming months.