U.S. Customs and Border Protection officials closed the San Ysidro port of entry in the wake of several hundred migrants who tried to storm the border between Tijuana, Mexico and the San Diego area on Sunday afternoon.

Tear gas was fired at the oncoming migrants from the U.S. side, Fox News reports, and the migrant group — comprised of mostly men — dispersed in less than an hour. 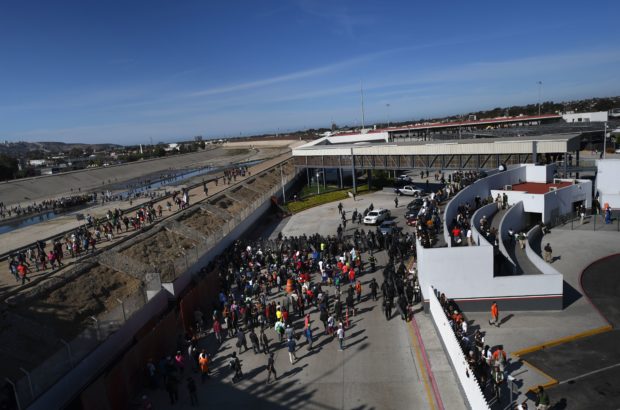 A group of Central American migrants -mostly from Honduras- get to El Chaparral port of entry after crossing the almost dry riverbed of the Tijuana River, in Tijuana, Baja California State, Mexico, on November 25, 2018. – Hundreds of migrants attempted to storm a border fence separating Mexico from the US on Sunday amid mounting fears they will be kept in Mexico while their applications for a asylum are processed. An AFP photographer said the migrants broke away from a peaceful march at a border bridge and tried to climb over a metal border barrier in the attempt to enter the United States. (PEDRO PARDO/AFP/Getty Images)

Us military helicopters all over Mexican side of border now. Normal protocol bars this. pic.twitter.com/q5mfnmvX1z

Some pushing right to fence shouting “yes we can”. pic.twitter.com/m03bNX9LIk 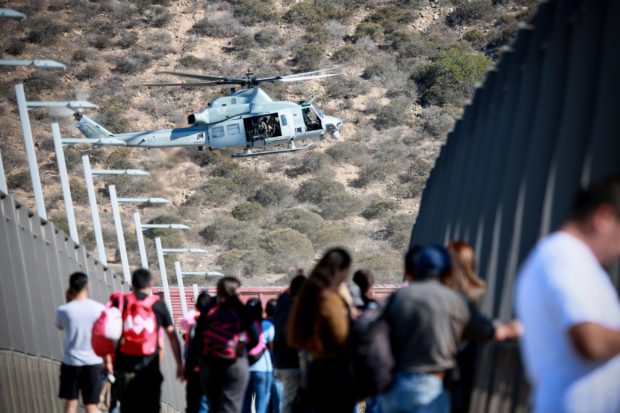 A United States Military helicopter flies past a pedestrian bridge after the closing of the United States-Mexico border was ordered on November 25, 2018 at the San Ysidro border crossing point south of San Diego, California. – US officials closed a border crossing in southern California on Sunday after hundreds of migrants tried to breach a border fence from the Mexican city of Tijuana, US authorities announced. The US Customs and Border Protection office in San Diego, California, said on Twitter that it had closed both north and south access to vehicle traffic at the San Ysidro border post, before also suspending pedestrian crossings. (SANDY HUFFAKER/AFP/Getty Images)

Migrants with children now scrambling up railway siding trying to reach us border thru mountain pic.twitter.com/ZeEZ0NApIx

Officials were able to clear the port of all vehicles later in the day.

JUST IN: @cbp has shut down all 26 vehicle lanes and 22 pedestrian lanes at the largest border crossing in America as migrants from the caravan storm the San Ysidro port of entry in San Diego/Tijuana. Port normally sees 70,000 cars pass over daily.

President Trump earlier Sunday called for Mexico to stop oncoming caravans long before they get to the United States border, blaming the problem on Democrats in a Sunday tweet.

“Would be very SMART if Mexico would stop the Caravans long before they get to our Southern Border, or if originating countries would not let them form (it is a way they get certain people out of their country and dump in U.S. No longer),” Trump tweeted. “Dems created this problem. No crossings!”